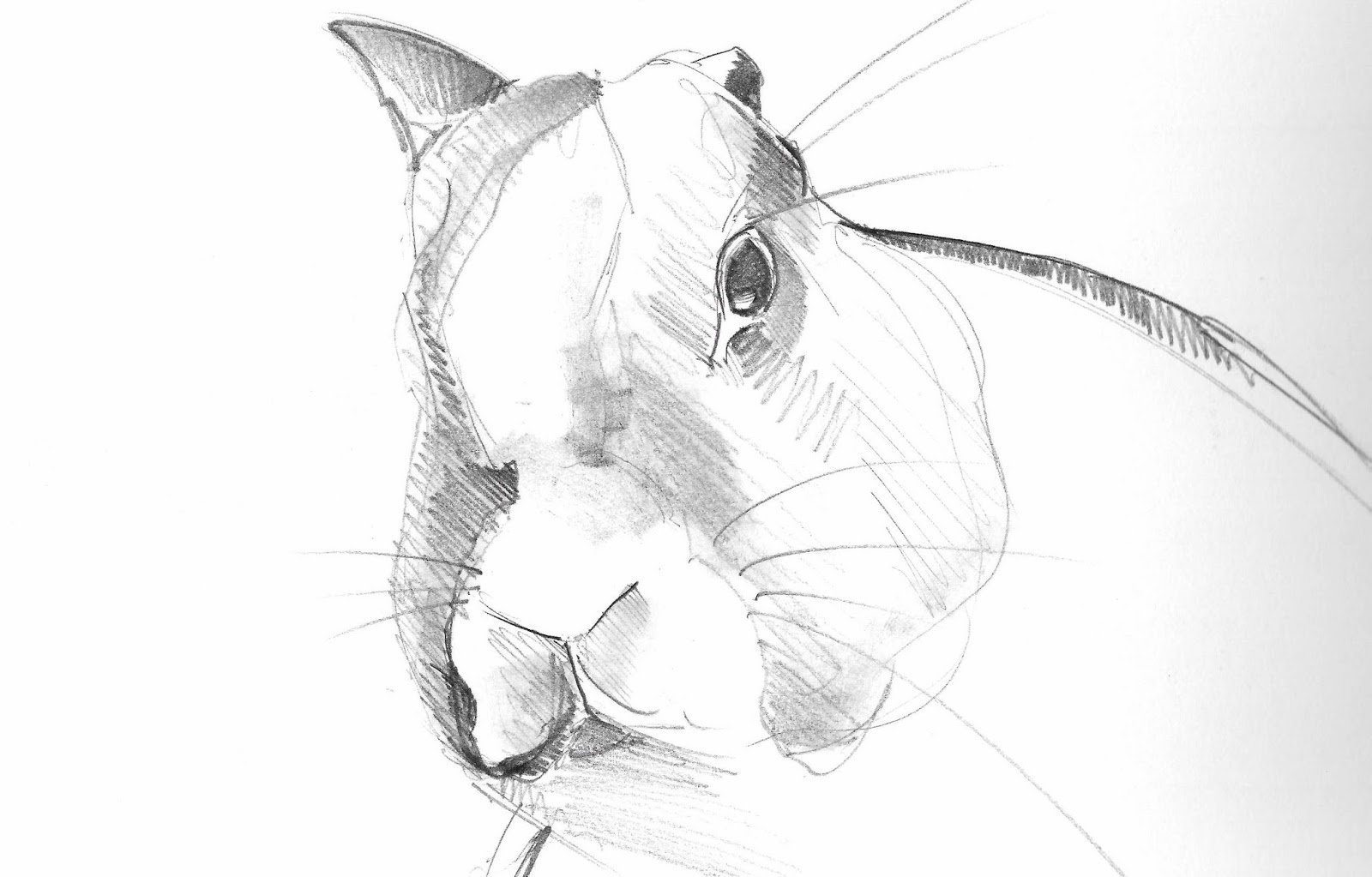 I found the switch and pulled off its cover. The air inside the suit was already getting humid, and my visor had to be getting fogged up badly. Grabbing the switch through a thick glove was tricky, but I flipped it and felt its dull clank. Silence. The suit stayed dead. I cycled the switch again—nothing. The emergency fuel cell— I had to activate the emergency fuel cell! My left paw slid up to my right side and found the flap covering the activation handle. The handle connected to a steel cable running through a steel housing coil to the cell pouch in mobility unit. After what felt like an eternity, the handle was in my paw. I yanked on it. The cable grated against the housing. I felt the reaction in the cell starting as it gently vibrated against my back. If all went well, I would have a few minutes of emergency electrical power, just enough to attempt a system reboot and a simple troubleshoot. Most importantly, the air scrubbers would come on, and my visor would clear up. The fuel cell was active, but the suit remained quiet. Then the gentle rumble of the scrubbers spread through the scaffold of the mobility unit. I could feel the tiny clicks of the self-checks the suit was conducting. While I still kept my eyes shut, a feeling of warmth spread throughout my body from the tips of my ears down to my tiny tail and toes. I completely relaxed and felt the tension starting to dissolve.
"Mel, Hopper, are you OK?" I tried to broadcast. 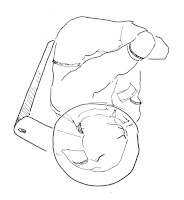 Mr. Toes
Of course, they could not hear me yet. If the damage to the suit were severe enough, the radio would come on last and then only partially. Maybe, it would let me broadcast in Morse code or not at all, transmitting only a distress signal. I kept my eyes shut and listened for the audible signs that the systems were coming back online. Then, the high-pitched buzz announced that the suit had full power. The radio picked up a transmission mid-sentence, and I heard somebun yell, "...oes! Are you OK?"
Hopper? Was it Hopper?
"I'm all right, I think," I replied, truly in the blind. I dared not open my eyes, keeping my eyelids pulled down so tight, I started to hurt my mouf. I felt somebun shaking me. 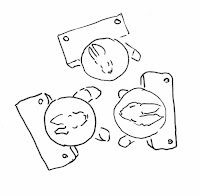 Around Mr. Toes
"Major, talk to me!" It had to be Hopper. So, if I can hear him, can I...
"Major, what's wrong with your eyes? Look at me, Major!" Hopper sounded frantic. Somebun kept on shaking me from side to side.
"Is he OK?"
I recognized Mel. They were both all right. Very slowly, my left eyelid released pressure, and some light tried to shine through it. I opened it up. I could see—barely. Everything looked fuzzy, and I started blinking, the way you do after a long nap, trying to see through eye boogers and hoping that some focus would return. Very slowly, I opened my right eye and noticed the same problem. I could see colors and shapes, but everything stayed blurred.
"He opened his eyes!" announced Hopper, sounding calmer. I kept on blinking, wishing I could rub my eyes. Eventually, shapes began to sharpen up. Hopper's lights started to feel harsh; I squinted again.
"Hopper, your lights, can you turn them down?" I whispered, and Hopper dimmed his torches. As he turned down the lights, my eyelids lifted, and I could make out the jolly mugs of Hopper and Mel.
"Are you sure you guys are OK?" I asked again.
"Sure we are, Toes!" said Hopper reassuringly.
"My suit went dead on me, just like yours, but I cycled it, and it came back on at once," said Hopper.
"Mine did the same," said Mel irritatedly.
"... and that's all?" I asked.
"Yeah, that's about all. Why?" asked Mel.
"That flash of flight, did it knock you out?" I kept wondering.
"Flash of light? What flash of light, Major?" slowly asked Hopper.
"This place dimmed a little, but that's all. I didn't see any flashes. Did you, Mel?" continued Hopper.
"So, you two are doing just fine. Are you sure you didn't see that?" I was stalling, not exactly sure why.
"My suit cut out as well, Major, but nothing more. It came back online right away," Mel reassured me.
At least my vision was returning to normal; I could focus my eyes, even if the colors seemed a little washed out. I tested the mobility unit, and the suit responded correctly. I could move about.
The three of us looked from the corridor outlet into the chamber. The floating debris of pebbles was easier to identify. Maybe the room lit up brighter, or maybe we knew what to look for. Not that it made any sense to us at the moment. Maybe we had disturbed something when we barged in.
Our eyes became drawn to the center of the chamber where another pile of rubble swirled in the middle of the room, except this one was a very orderly pile, and it took me a minute to realize it had a distinct circular, flat shape. I thought it emitted light, not much but enough to be perceived. Then, I noticed two more shapes like that, flat, circular formations of something. From a distance, it was hard to tell exactly what they were made of. Were they the same pebbles so prevalent in this place, or were they made up of something else?
"Guys, please tell me that you can see that," I said, staring at the slowly turning shapes.
After a pause that went on way too long for my taste, Mel whispered, "I see them; I see them, Major." Without a word, Hopper unstowed a tether from under his jetpack and clipped it to the front of my suit. The three of us floated in unison toward the moving formations. We aimed to float over the structures, to make sure we would not collide with them. As we closed in, my oxygen alarm went off, then Hopper's. Based on our agreement, this was our cue to turn back. "Five more minutes!" we all yelled out at the same instance. Hopper started to break as we approached the formations. Mel set his timer for five minutes. We came to a stop over the center of the slowly moving spheres. They looked nothing like the pebbles we have run into today. They were perfectly round and varied in size. The smallest ones were just mere points of faint light. 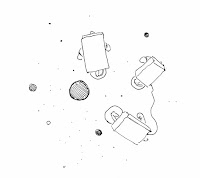 Bunstronauts staring down
The other two formations were dark against the brighter background of the chamber. The ones made of larger shapes also appeared to be round, without any imperfections. We floated motionless, ever so slightly drifting and turning away from the glowing form, or maybe the three formations were moving about us? We have kept still all the same. All three structures started to feel familiar to me. Were they models of something? Have I seen them or whatever they represented before? I honestly could not recall.
Mel's five-minute alarm sounded off, and he turned toward me with a pleading look in his eyes.
"That's enough of that!" I said curtly. Hopper turned around and took the lead toward our corridor. He said something about losing our tracker data, but he kept moving toward a corridor, and it led us all the way to our ship without an incident. Part of me wondered, "How come we didn't get lost? How did Hopper know which corridor was ours?" 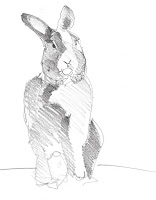 Mr. Toes
We said very little that night. Mel insisted on checking my vitals before we crawled into our makeshift burrows. He checked my eyes and took his time doing so. Afterward, Mel gave me the biggest bear hug I had ever gotten and wouldn't let go. When he had enough, he pushed off and up without any explanation and went on a binky binge bouncing from one wall of the cabin to another and back. Something's gotten into him. I just wanted to go into my burrow.
Credits:
- Renee: taking care of critters, photography
- Mr. Bun, Ijon Thichy The Nth: story
- Mrs. Angie: editing