Many of you know that several months ago we said goodbye to our beloved Mr. Bun, his companion Ms. Bun passed over the Rainbow Bridge several years ago.  After, Tomasz and I did not bring up the subject of a new family.  We let it lie between us in the silence, neither wanting to cause the other undue pain.  Tomasz was Bun's principle care giver and I was more of a support to them.  I loved Bun very much but he was in love with Tomasz, how could he not be.  I was happy to play second fiddle.   They formed a bond I have only seen among father's and children.  Mr. Bun came to us in 2004, a year before Tomasz and I began our family adventure, when we were still just fresh from our whirl wind romance sparked by our memberships on cybersoulmate.com. We began our home world with two buns and a 10 year old daughter who was not interested in sharing her mom with "some dude." We have had many adventures together.  Our buns grew up, our tween became a teen, we lost Ms. Bun, We lost Mr. Bun, our daughter, at the wise old age of 20 moved into her first apartment.

We inhabit a new world.

About a month ago the subject of Buns came up in a conversation.  "Would a Bun be alright with you?"  "Yes, a bun would be alright with me."  "Are we talking one bun?"  "Well, they do so much better in a bonded pair..."  "So, two?"  "Yes, just two."  And then the conversation was dropped.  Several times I would suggest we visit the SPCA.  Tomasz would begin to think about that and of course that would lead to thoughts of Bun, and we would not visit the SPCA.

I decided to take matters into my own hands.
I saw there were two buns that needed a home at the SPCA but on the day I went to adopt them, they had already found homes, this happened once more.  I decided to let it go.

Then, I thought, well, let's look at Tampa.  There at the Humane Society, in the Rabitat, were two buns, one small, one large, the larger bun was not at all interested in talking.  The small guy though, he was ecstatic.  He came right out from the bucket he was hiding behind and basically jumped in my lap.

There were three more Buns that weren't lucky enough to make it to the Rabitat.  They were lined up in the hallway in tiny cages next to the insistent sounds of barking pupsters.  The largest of the three was a one year old female who was also very energetic and loving.  The little guy and the big girl came home with me on December 21st.

I placed them in their new room/rabitat and shut the door.  I placed a bale of hay under the Christmas tree and waited.  Tomasz came home a few moments later and was not even through the door before he asked what's up with the hay.   We played warm and cold until he opened the door to the rabitat.

It was love at first sight.
Endings are often overwhelming.  New beginnings often bring back all of the emotions of the endings in life.  We will always be in love with Bun and his Mrs.  It takes great courage to love because it requires surrender, it requires uncertainty.  It looks like we have found a little bit of courage.  What can I say, we are Rabbit People. 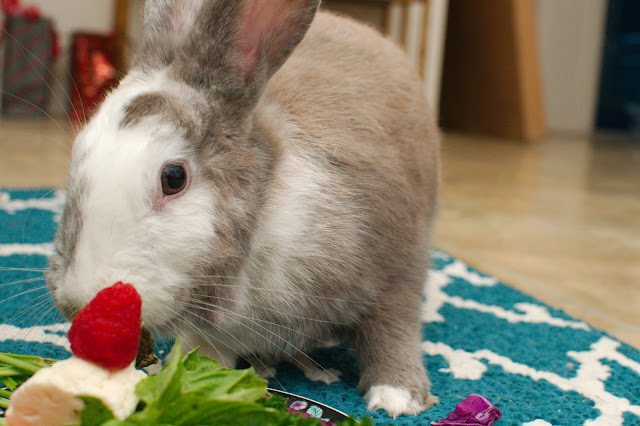 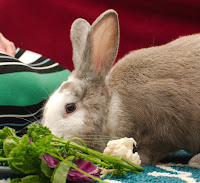 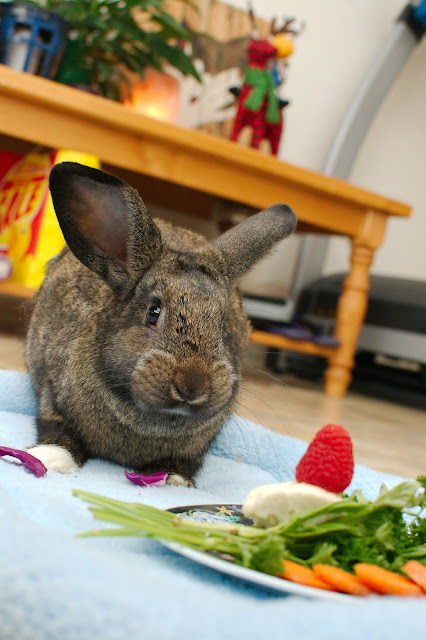 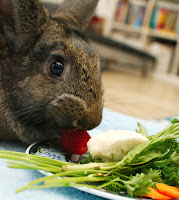 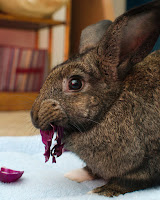 Hello Latte Nipper and Espresso Scrappy....welcome to Blogville,so nice to meet you both,xx Speedy and Rachel

Beautiful bunnies! Thank you for adopting them. They have a wonderful home.

A perfect story to start the New Year. Lucky buns and lucky bun-folks!!!

What a beautiful story. Sad endings, and hopeful beginnings, an excellent summary of life with a bunny. Thank You for rescuing Nipper and Scrappy, 2 beautiful and precious bunnies. Take Care, ken&kaci and the Desert Warren

Isn't it time for you all to get a move on and head to the Tar Pits?

What a great post, and welcome to the newest members of your family. Espresso looks like my beloved Arial who passed away 18 months ago.