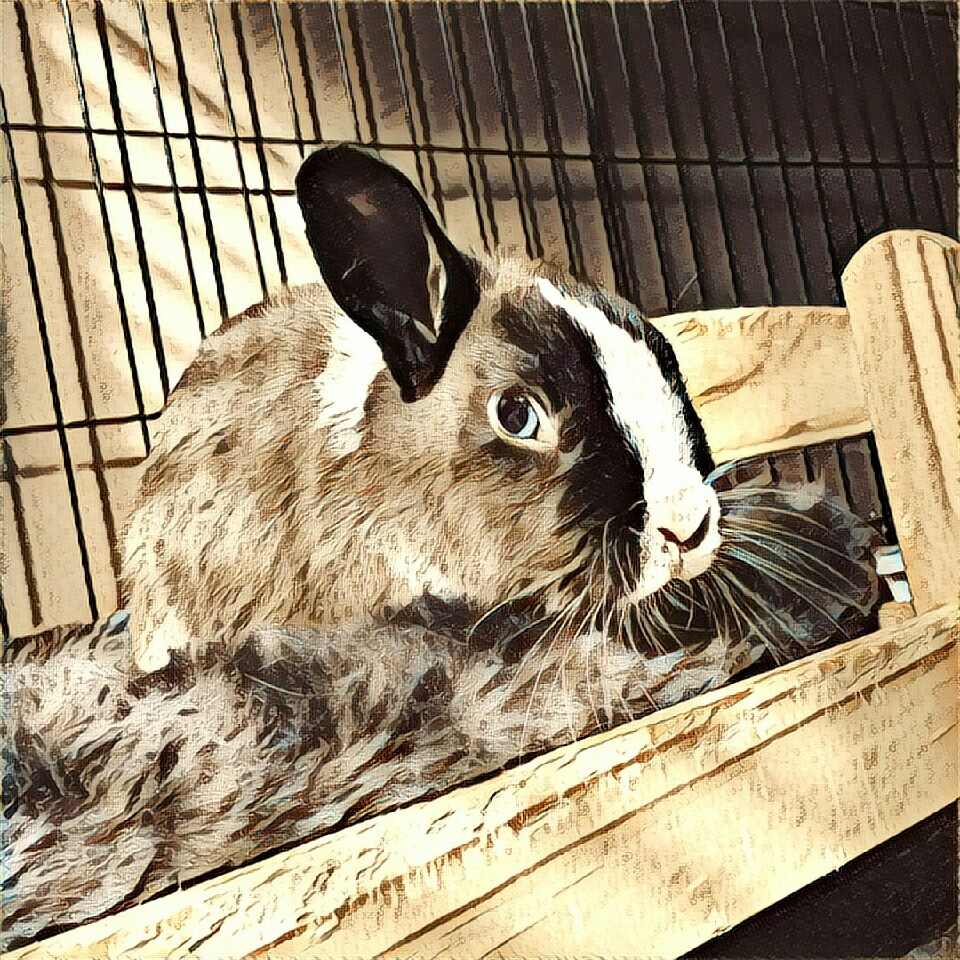 Author's Note:Mr. Toes and his crewmates get resourceful. They find a way to construct a remote probe to send down into the mystery ship.
Hopper, Mel, and Mr. Toes get a first look at the insides of the alien craft.
The raspy sound of some bun cutting fabric woke me up. I stuck my head from the thermal blankie burrow and there was Hopper, wrestling something and holding a sharp blade in his paw. Then, Mel popped up, disoriented and looking at Hopper and staring at me. We wiggled ourselves out of our sleeping bags and floated over to Hopper. He was slicing open the spare umbilical. Mel and I put our feet in the restraints on one of the walls and took hold of the umbilical. We stretched and held it as taut as possible while Hopper went to work on the outer layer of fabric. 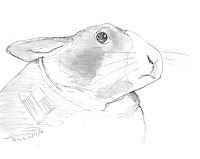 Mel
"What's the idea?" I asked.
"Antenna, Major! You wanted a probe, but I didn't know how to give it an antenna! Now, I do. We can get the wires out of this thing and make an antenna from them. It will be long; it might work. At least, we will see something before we commit ourselves to the mercy of this space gizzard."
"If you have any reason to believe it's a space gizzard, we're not going in. We're going to make nice with the arthropods down on the planet, and we will figure out how to live off of prehistoric ferns."I reassured everyone. 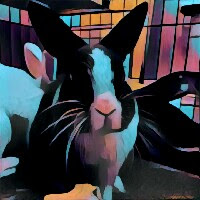 Mr. Toes
Hopper struggled with the carving of the umbilical. After all, the outer fabric was designed to take a lot beating. He had to be careful not to cut any of the delicate guts. It took us all morning to do it, but in the end, we had a large spool of fine wire. Mel and Hopper worked on the probe while I prepared our suits. Don't believe the nonsense they feed you in virtual reality adventures where you can jump into a suit and go. Suits eager to con you out of your hard-earned carrot tokens engineered suits like that. Prepping the suit still is a delicate and subtle affair. You have to be one with the suit before the suit can become one with you. If you try to hurry, you invite pinholes and leaky seals. Next thing you know, you become a flash frozen sacrifice to the space bends. Your fur will do nothing to protect you from temperatures of near absolute zero or a few hundred degrees Fahrenheit.
Our probe was almost ready. We had to use a spare universal RCS thruster, but what the hey. A couple bottles of compressed air, a radiation detector, a little control unit transmitter, and a camera and we were ready to explore. We wrapped the probe in a thermal blanket, and it looked like a giant stogie ameba, oblong with a thin wire coming out of its tail.
Our day got away from us again, but we were too excited to stop now. I offered Hopper and Mel the option to stay on our ship, but they declined. Gone were the days of playing it safe. Our ancestors didn't survive the meat farms for us to give into fear when we could least afford it. I just didn't like those two to go into harm's way if I could help it. But they didn't see any sense in pretending there was going to be something "better" down the road. 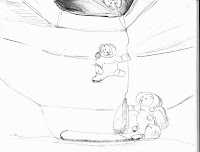 Getting ready to deploy the probe
Mel maneuvered us close to the open airlock. We went outside and tied the antenna spool to the cover of an auxiliary electrical port. Hopper took the robo-amoeba and gently launched it into the airlock as we unwound the wire until the probe came to rest against something inside the Behemoth.
We hurried to the flight deck to see what the probe had discovered. We sealed our craft but remained suited, just in case we deemed the Behemoth safe to enter. Mind you; we noticed no signs of activity on the part of the Behemoth; no movement of any kind. No pod-ships left it, and the missing one was still missing. Only the light in the berth kept going wild from time to time. We concluded it must have been some automated system reacting to us, nothing more.
We watched the video as the probe floated through the corridor past the airlock. It went through another airlock. The corridor was rounded; reminiscent of a tunnel or a pipe. Interestingly enough, both sides of the probe lit up and the radiation detector started to go off. Something was emitting a low-level of radiation as the probe moved along, passing by rounded openings and leading to Bun knows where. So far, Mel guided the probe along the corridor just to see what would happen, but nothing happened aside from the illumination following the probe. No one and nothing came out to greet or to confront the probe. 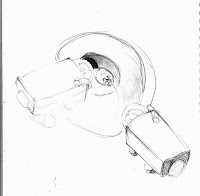 Probe gets deployed
We wondered how much habitable space this ship contained. When we explored the combustion chamber yesterday, we knew that the length of the chamber was much, much shorter than the length of the craft. So, what occupied all that leftover space inside? I was hoping that we would discover the command a control center of the craft, and fast. Was it reasonable to think that we could recognize one?
At the next junction, we stopped the probe and made it take a right turn. As the probe went through the junction, then a short corridor, a low ceiling with a wide and deep chamber or room came into view. The empty room lit up with a faint glow on all sides. The "top" and "bottom" walls showed irregular shapes described by thin, recessed lines. Did those walls open up? I don't think those were decorative carvings.
Mel turned the probe around and moved it out of there. He guided it back to the corridor we were exploring previously and proceeded to go further down. We took it as far as the wire antenna would allow it. When the wire stretched as far as it would go, the probe bounced around a little until Mel stabilized it. When it became still, it peered down the curving corridor. The control room I've been longing to see was nowhere in sight.

Mel turned the probe around and went back some.We decided to peek into another space. The wall of the room lit up again. From one of its walls, the top one from our vantage point, protruded conical lumps of gravel-like objects. Those clusters took up the entire wall, and some were stretching all the way to the "bottom" wall, almost touching it. They looked like gravel from a stream, smooth but less rounded; some sides looked flattened. The probe inched closer to them. Hopper started to bring our power plant to liftoff thrust.
"Relax, Hopper; remember to breathe," I reminded him. We all buckled in fast. If Hopper got throttle-happy and punched us out of there, we would hit the aft bulkhead and get creamed.
Now we waited. The cones didn't move. They were dark and hardly reflected any light. Only some of their edges took on an opalescent glow. "Mel, try to touch one of them. Gently!" I asked.
Mel turned back toward me with disbelief on his mouf.
"Very gently, Mel," I repeated. "Barely kiss it, will you?" I insisted. Finally, Mel guided the probe toward the nearest formation, and we watched as the conical shape slowly grew until it went out of focus. The nose of the probe touched it just below the tip of the formation and gently bounced off. 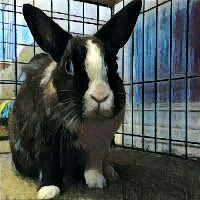 Mr. Toes
Nothing happened.
"Back up and hit it harder," I asked.
"Major, have you lost your mind?" objected Hopper, agitated, his paw fidgety on the throttle. Mel backed up the probe and hit the next cone harder; roughly one-third of the way down from its narrow tip. The tip broke off, and crumbles flew in all directions. A few of the smaller pebbles making up the cone came loose and slowly floated away. We could see their uneven edges as they spun around, moving out of the camera's view.
"I think we can stay put. Throttle down, Hopper," I asked. The flight deck was becoming quiet again; there were still a few loose pieces floating in front of the probe's camera as Hopper and Mel gaped at me.
Credits:
- Renee: taking care of critters, photography
- Mr. Bun, Ijon Thichy The Nth: story
- Mrs. Angie: editing

Making progress without disaster - hmmm ... better save up my money for next week's show!!!