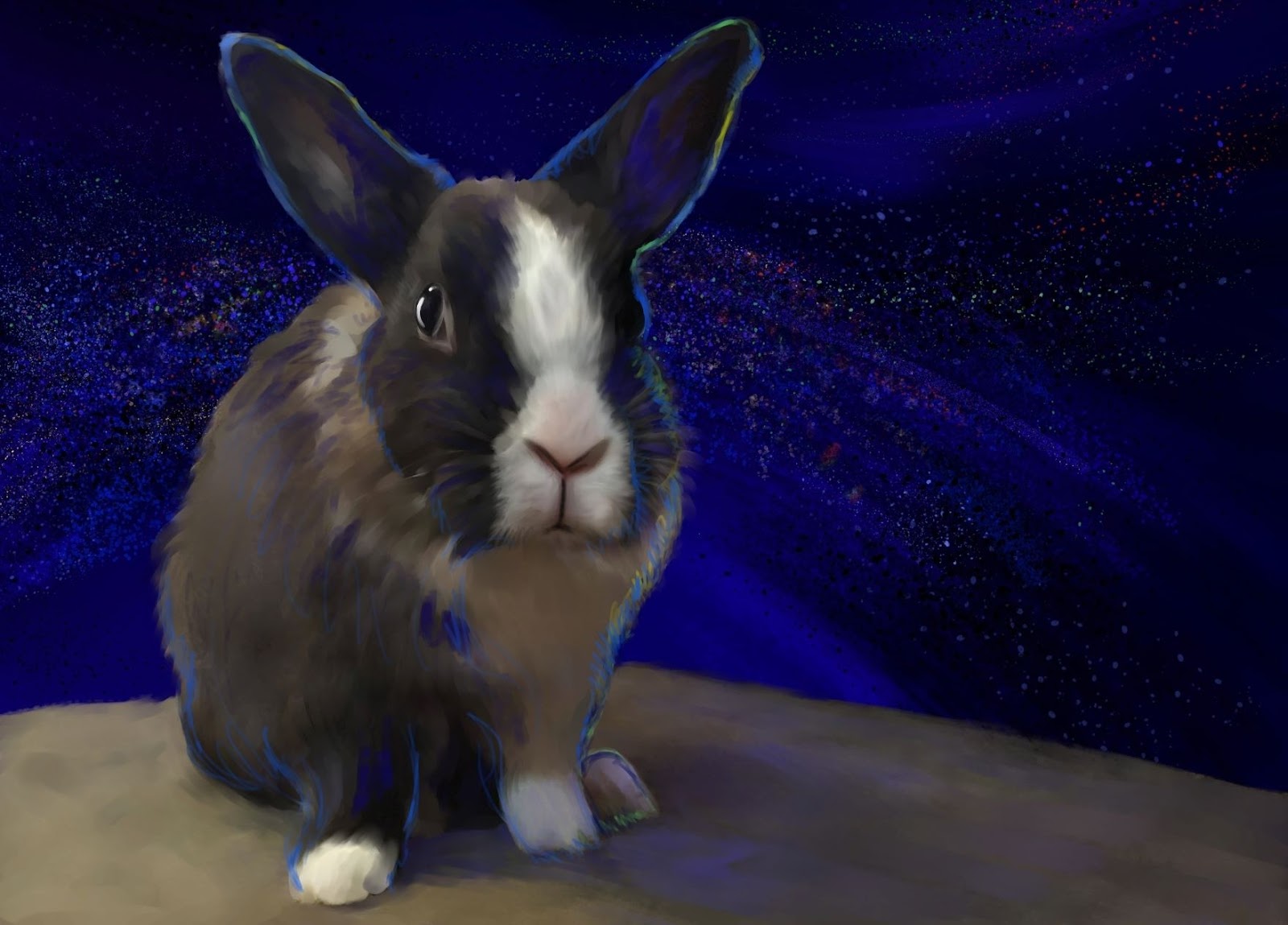 I didn't know how to explain to Hopper and Mel that nothing would happen to us as far as the inhabitants of the Behemoth were concerned. I didn't think there was anybun alive in that craft. I was much more concerned about the levels of radiation that our probe registered, even though Mel said it wasn't much. He thought, at that level of exposure we could spend a lot of time in the wreck before we would have to worry about anything. I, simply, am not a big fan of dying from radiation poisoning. 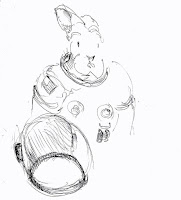 Hopper
"Major, do you think that is what killed their crew, long time ago? Do you think they had a core meltdown? If this thing is old enough, the radiation levels would eventually drop low enough to be negligible," wondered Hopper.
"No, that's not what we're dealing with here!" rebuked Mel.
"We're picking up those bursts only from time to time. We got them when we approached the 'dock' and when the probe was on the move," continued Mel.
"I tell you what, let's retrieve the probe; we'll go in first thing in the 'morning,'" I said. Thus, we pulled the probe out of the Behemoth. To save the propellant, instead of flying it back, we just slowly pulled on its antenna. We stowed it in our airlock, and Mel ran a double decontamination cycle on it. Our airlock can serve as a decontamination container, but we only simulated the procedure during training, so it took us a while to complete it. It's funny how your paws want to tremble when your hide is on the line.
The next "morning," we sent the probe back into the Behemoth; nothing had changed. We got ready to follow it. One rule would guide our exploration. Our incursion would last for a third of our propellant or oxygen supply, and whichever ran down first would trigger our return.
We drew lots for who would be the lead EBA and I won the slot, Hopper drew second, and Mel, the disappointing and disapproving; a hair short of disgruntled, drew third. Both seemed convinced that the arrangement was random and so they didn't object 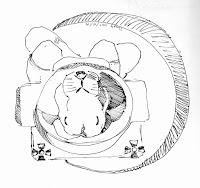 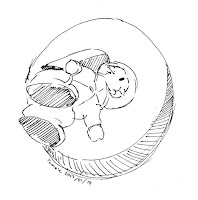 Mel, out of the corridor
The first thing we noticed was the radiation past the airlock. As the corridor lit up once we entered it, our sensors picked up a burst of something radioactive and then nothing. Either our sensors went bad, all of them at the same time, or whatever was emitting the gamma rays had stopped. We followed the probe's antenna, and when we caught up with the probe, we send it on farther down ahead of us. We took no detours. When the probe went as far as it could, we followed it again and repeated this process several times. We kept a close eye on our supplies and location. Mel was in charge of the tracker. Hopefully, we would be able to reverse course and return without getting lost.
We paused for a bit to estimate our progress. We should have been close to the tip of the Behemoth, but the corridor kept on going in a gentle curve. Luckily, we didn't have to take any turns yet, so going back should have been easy. We were getting a little edgy, though. Hopper was working extra hard to keep his cool, and his oxygen sensor proved it. I had a feeling he would be the first to hit the one-third mark of oxygen depletion. At this rate, we only had a few minutes left, so I decided to pick up the pace.
The corridor continued to curve in front of me. From time to time, I had to push off from its surface. Sometimes, I would overcorrect and fly into the opposite side and had to bounce off that. We passed a few junctions, but somehow, I didn't feel tempted to explore them.
Suddenly, the corridor ended and opened into a cavern. I struggled to stop moving. Hopper and Mel flew out into the room and struggled to stop as well. As much as I pretended to be ready for any surprise, the change in surroundings was startling. The room was spacious and looked empty. Our headlights and paw torches barely illuminated it. The good news was we had plenty of propellant; the bad news was Hopper was almost at the "go back" oxygen level. 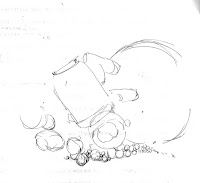 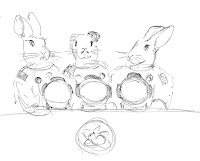 3 Bunstronauts doing their PR bid for the Bunstronaut Office
The room was puzzling. We had to be somewhere close to the nose of the Behemoth.
"Make sure you're recording this," I reminded everybun, as I turned on my helmet camera. I took a quick look around and noticed we were all still floating. Mel was the closest to the corridor out of which we had flown, but there were a lot more openings, more outlets, in this room. Did all roads lead to here? I decided to go back to the one we came from. No matter what, we would not be getting lost here.
"Guys, I 'll stay by the opening, you have a look at the surface of this place," I announced. I gave Mel a "high-five" as I passed him; I had our corridor straight ahead, then something hit my visor. I looked to my right and tried to follow whatever it was, but I lost it. Something else hit my helmet again with a gentle "pop." I swung my head around, but I still missed whatever it was that hit me.
Darn, I hit something!" exclaimed Hopper, then I saw it heading for the left side of my head. A small pebble like those we saw in one of the rooms yesterday. "Keep calm! I hit something too. I think those are fragments of those formations we saw. Chunks of them are floating about here!" I said. Now, I noticed a few more of them. This chamber had a glow to it like the other spaces, but was spacious enough that its dim light didn't reveal much. As I got closer to our exit corridor, I noticed how it blended with the chamber.It had no discernible edge and smoothly morphed into the dimpled chamber. I looked up and saw a formation of "pebbles" arranged like a vine or a branch, stretching from the surface toward the middle of this cavern. I could briefly see larger shapes connected with small and quite tiny ones, like grapes that fused together. I wanted to turn around, but the opening of the corridor was approaching fast, and I chose to make a soft landing on the side wall. I lost the visual contact with the pebbles. 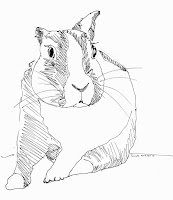 Mr. Toes
"Wow! You won't believe what I just saw!" yelled Hopper.
"Try me! Those pebbles, growing together like thick ropes, no?" asked Mel.
"Yeah! That's right!" sounded Hopper.
Then I almost died. Somewhere, a flash of light went off, as bright as a nuke, and then another one tinged with purple. I felt a sudden rush of blood to my head before my mind could even register what had happened. I couldn't see anything; my ears were ringing and hissing, and everything went quiet. My space suit was silent. I felt the life support system in my suit going off-line, and all I could hear was white noise. My noggin tried to make sense of it all. How could I see the second flash when I should have been blinded by the first one? I hit something, and my head snapped forward; I tried to extend my paws in front of my head. My heart was thumping like a jackhammer, and the veins behind my eyes wanted to burst. I kept tumbling somewhere and tried to protect my visor with my right paw as my left paw fumbled for the reset switch on my suit.
Credits:
- Renee: taking care of critters, photography
- Mr. Bun, Ijon Thichy The Nth: story
- Mrs. Angie: editing