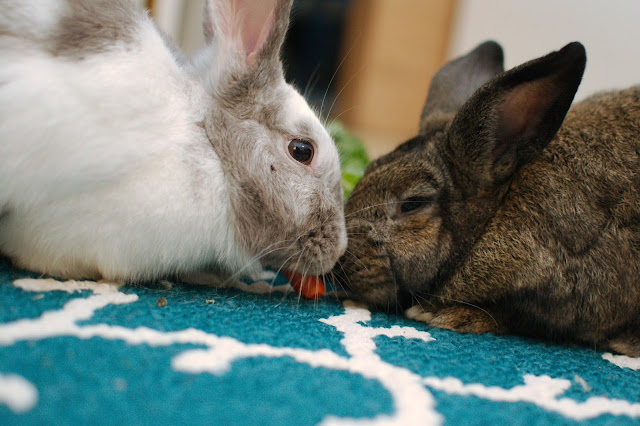 Slowly but surely, we're working on enjoying the salaaaaaads together. This week there was a little less chasing each other around and more lounging around next to bunanother. We still have our room divided, though. Espresso found out where the hoomins keep apples and nanners and he's becoming adept at inspecting groceries before the hoomins put them away. As for me, I've been mapping the whole house, chinning and mark-noming whatever I can. We have scored a couple of unattended snakes! It's so funny; the hoomin plugs in one end of such a snake and tries to figure out why it's dead, hilarious!

Ah, the moment they realize that they are *partners* in global domination; true bonding :)=
-Jen (Kohl's mom)

This reminds me of the scene in Lady and the Tramp in the Italian restaurant with the spaghetti.

Sharing a beautiful meal and double teaming the intruding snakes. Those 2 kids are on their way : )
ken&kaci

You two make such a cute couple. A nice lunch date you have, noses together. Hopefully you'll be moving in together soon.
merle, trixie, baxter