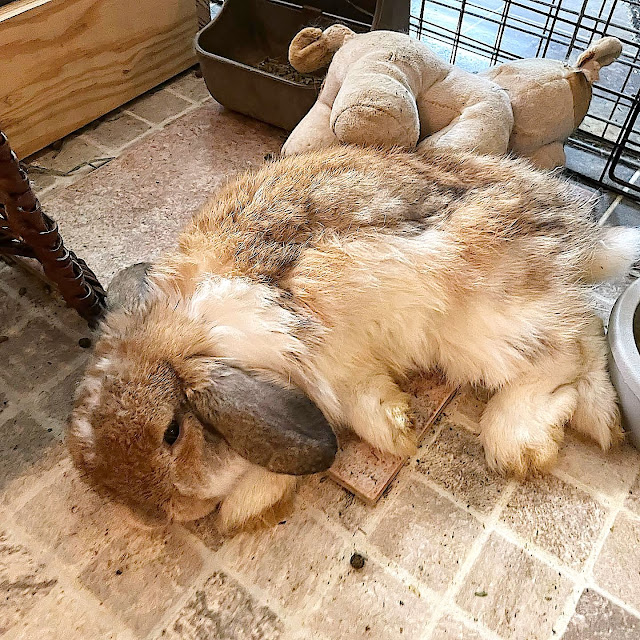 PS: Butterscotch and a few other bunns are getting their special operations this week and soon will be looking for their forever homes.

Posted by Mister Bun at 6:27 AM No comments:

We have noticed a while back how the days are getting shorter. Even the calendar is starting to tease us - this upcoming Thump Day (Wednesday if you need help with that), Fall will officially begin. The senses are trying to pick traces of something different in the air, but in La Florida, you are lucky to be haunted by the memories of turning leaves.

But we'll keep our spirits up and our carrotinis higher - so here's to Fall, if only on paper.

Posted by Mister Bun at 3:55 PM No comments:

We're enjoying a cooler, gray, and groovy day, perfect for lining the pee bin with plans and agendas. The trick is not to miss a breath and grit your teeth with gratitude. And head rubs - never forget the head rubs.

So what that your hoomin is trying to type up some notes!? You saddle up next to them and expect to get your head rubs - they don't need two paws to type! I've been doing that all week; believe me - it works!

PS: We don't have a progress update on how Rheya is doing at her new home, but we'll try to find out. I guess my hoomin misses her still. Sigh. 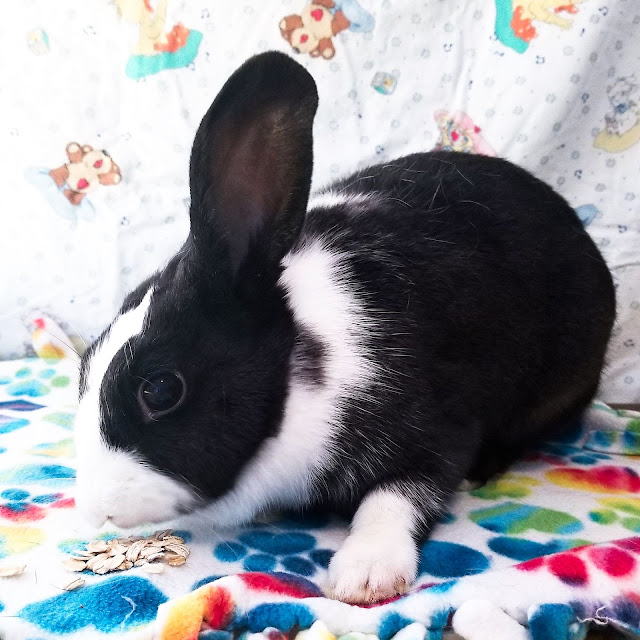 Just keep away, hoomin, and don't mess with my weekend aura!

PS: Cupid is still looking for her forever home. You can learn more about her here.

NOTES: Contact us for more information The BHRR fundraiser is still going on and is over the 3k mark! :-)
BHRR: http://bhrabbitrescue.org
Fundraiser: https://www.gofundme.com/brambleyhedgerabbitrescu
Posted by Mister Bun at 6:29 AM 2 comments: 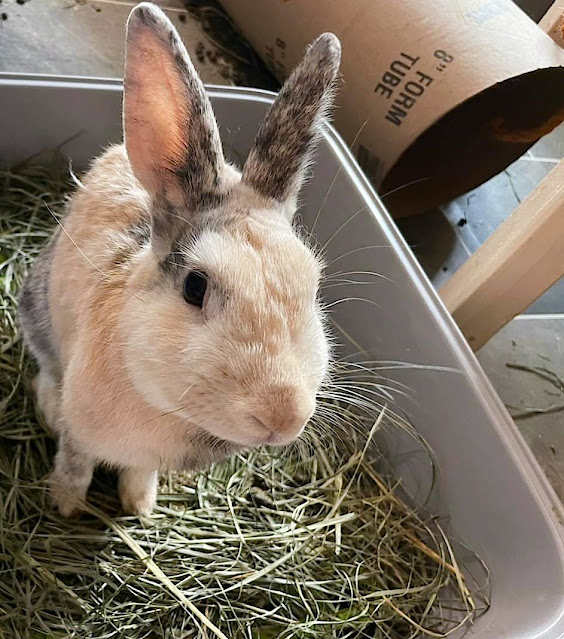 Your job is to shut up, hoomin. And harry up with that raspberry moonshine!

PS: Yes, somehow, we bungled the story line yesterday, got the names wrong and all that, but Vincent and Francesca are still fundraising for their special operation: https://www.onehopewine.com/event/c95474fa-6425-41a4-9faf-0281bdd3a369

Of course, they will be looking for their forever home soon. 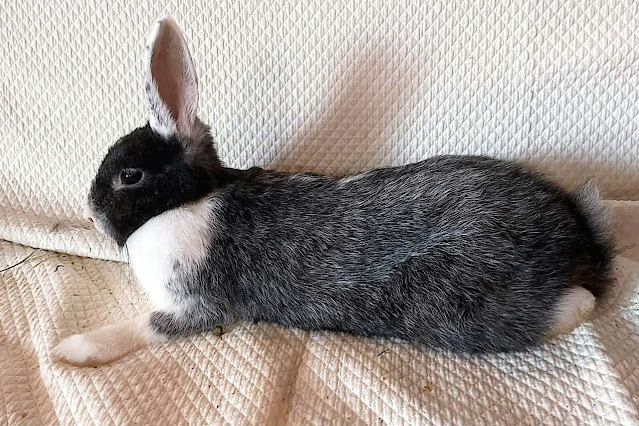 Ya think ya know when to hold 'em and when to fold 'em, eh?

PS: Fiona was rescued from South Floridan and her partner got freshly rescued after wandering about in South Tampa. And guess who's gonna be featured tomorrow ;-)

Posted by Mister Bun at 6:48 AM No comments: 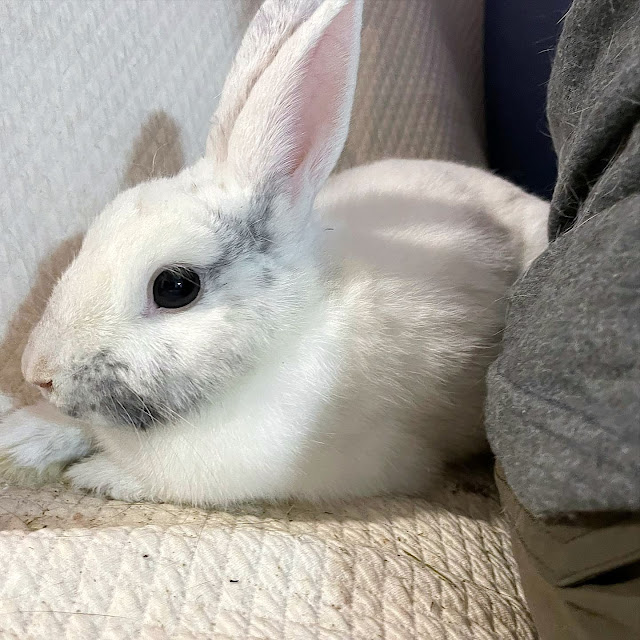 Five cawwots on whoever plays the Bucs this weekend!

PS: Rory loves to watch TV, so of course, he'll catch a game or two. He is looking for his forever home. Rory was rescued a few months ago, after wandering around South Tampa.

Posted by Mister Bun at 6:39 AM No comments: 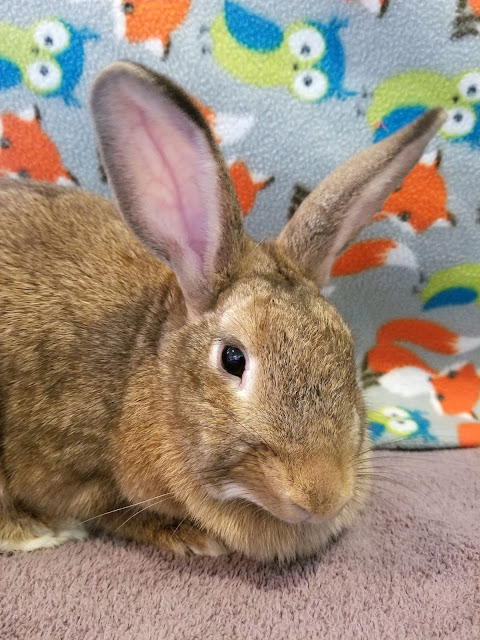 PS: Honey is still looking for her forever home, learn more about her here.

The BHRR fundraiser is still going on and is over the 3k mark! :-)
BHRR: http://bhrabbitrescue.org
Fundraiser: https://www.gofundme.com/brambleyhedgerabbitrescue
Posted by Mister Bun at 6:34 AM 1 comment:

If you asked my hoomin, he would tell you that the last two days felt like one with a nap in the middle, punctuated with nightmares. It's OK, though. we roll with it, and it makes for a weirdly bunderful stretch of chilaxation. My hoomin is still in the desert of typing up those lesson plans, still telling himself it's nothing but "priming the pump." In the end, even this mind-numbing and depressing stretch of staring at the regs will come to an end. Just try to digest "14 CFR Part 61.3 (j) Age limitation for certain operations." It's a fascinating hint at how things will be rounded off in the end.

In the meantime, we'll be communing with bun another, and even if we can't exactly churn out anything artsy beyond a few photos, we'll plod along. One cookie extortion at a time.

Posted by Mister Bun at 4:20 PM No comments:

The big news is that Sadie went off to her forever home yesterday afternoon. She met a charming lad who lost his bunwife just recently. We wish them all the best.

Aside from that, my hoomin tries to give in to the Fall's sense of security and comfort that comes with September. Does that line mess with you? It should; it messes with us. There should be the occasional cool evening, leaves thinking about changing colors, and that smell of changing season in the air.

And then we remember where we are. That smell could be the red tide in the Gulf or something brewing off the coast of Africa. And all we can do is wait and wonder. 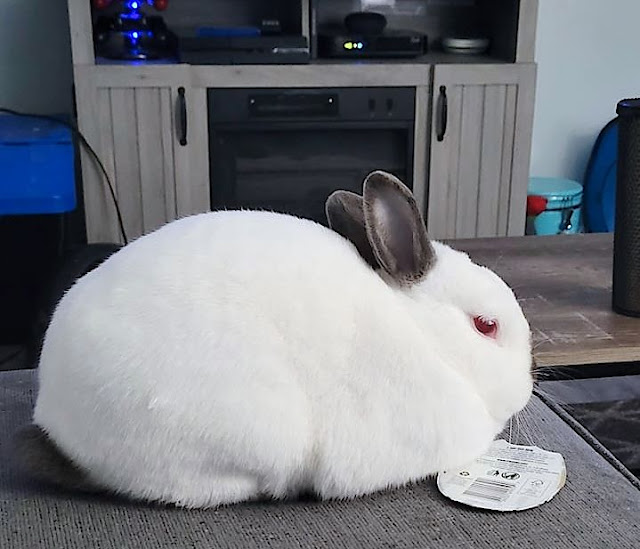 Look - I can't make it any more "sideways" than that!

Follow Jake and Cinamon on their FB page at Jake & Cinamon!

Posted by Mister Bun at 6:37 AM No comments: 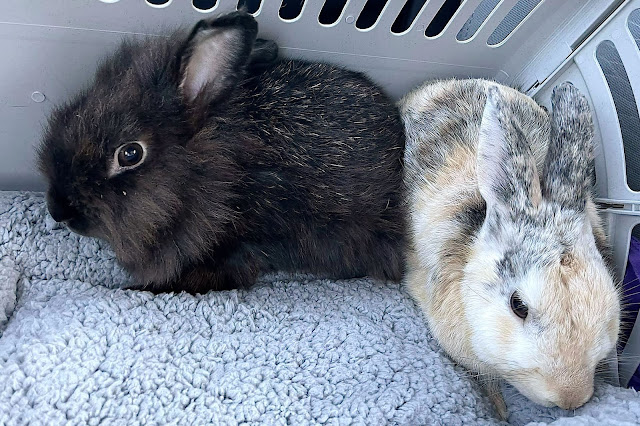 PS: Vincent and Francesca are getting their special operations and will be looking for a forever home soon.

Posted by Mister Bun at 6:33 AM No comments: 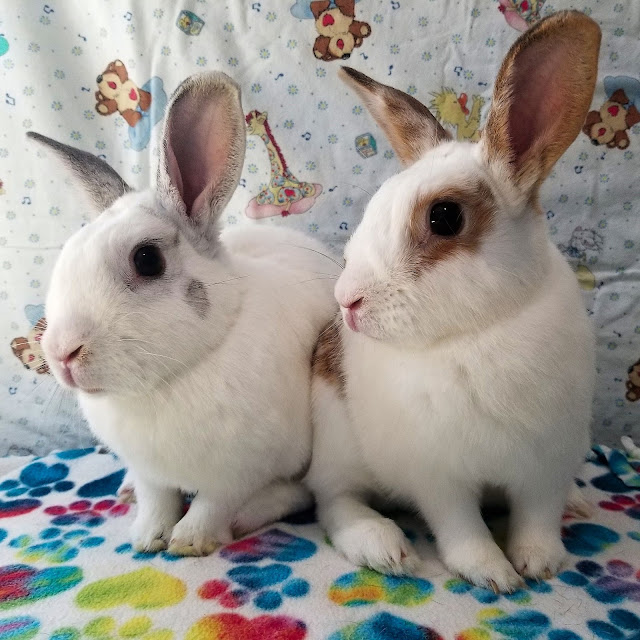 PS: Knot and Tangle are looking for their forever home. You can learn more about them here.

NOTES: Contact us for more information The BHRR fundraiser is still going on and is over the 3k mark! :-)
BHRR: http://bhrabbitrescue.org
Fundraiser: https://www.gofundme.com/brambleyhedgerabbitrescu
Posted by Mister Bun at 6:37 AM 1 comment: 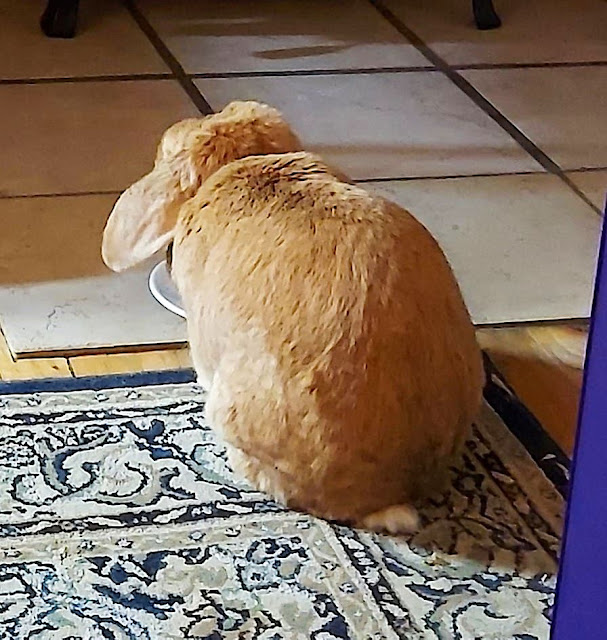 Ah, yes,  you're having a M*nd*y on a Tuesday - very sad. The tail wants to know all about it.

PS: Follow Peaches on her FB page at https://www.facebook.com/peachesyoknis/

Posted by Mister Bun at 6:33 AM No comments:

I took up residence in this new, maybe temporary, maybe permanent home. It takes a toll on ya to bounce around homes like this, especially after you lose a husbun. I have a feeling everybun here takes it one day at a time. So we'll see what happens.

I share a room with a couple of buns, Charlie and Gus. That Gus feller is nice enough. I think I can make good friends with him. Charlie, on the other paw, has a real attitude problem. Or she needs a lot of exercises because she's been running up a down the perimeter of my x-pen for two nights now. The good news is she seems to be getting petered out.

Today Charlie went to hang out with some bun called "Espresso." I hear that's the one that taught her all those bad manners. It's nice and quiet now, and I've been running zoomies and trying binkies!

And that hoomin that sat with me in the x-pen this morning? He smells familiar. Maybe I've met him before at a "meet-and-greet" or something. What a small and strange world it is sometimes.

I try to honor this day by loafing extra hard. I have a big, loaf-perfect hay bin and a small, personal bundo that's just right for me.

Yesterday afternoon, Rheya started on the next adventure in her life. She went back to the rescue to meet some potential forever hoomins. We'll keep you posted on how that goes. If it doesn't work out - she's coming back, and that's the end of the story.

This foster stuff is tuff. My hoomin was all busted up over it, but the original idea was to do what's best for the bunns. As awful as it feels, it's still the right thing to do. And we have fallback plan.

So, Rheya left, and Sadie moved in. Sadie lost her husbun, Cooper, last week. Maybe she could use some peace and quiet? Of course, Charlie thinks that's rubbish, and once again, we had all night assault on the x-pen. I think it was the "Bay of Bunns Invasion" reenactment.

I don't mind the new girl; she seems nice enough. We'll try to have an update on Sadie tomorrow.

Posted by Mister Bun at 4:57 PM No comments:

I finally got to run around the room with Gus. I ..., I don't know what to do with a nice guy like that. He puts his head down and - I don't know - wants a head rub? We're not friends yet, but we don't harbor any murderist ideas toward bun another either. Maybe I need more time.

For now, we get along well enough. Charlie is not warming up very much toward me, but that's OK. Maybe she needs more time. She is one bossy bunny, and I don't think I'm a pushover either. So there you have it.

And that hoomin of mine, the one I bonded with really well, he started tapping his finger on the tablet; in the art program. It's like learning to walk all over again. Is it time to channel Douglas Bader?

Posted by Mister Bun at 1:00 PM No comments: 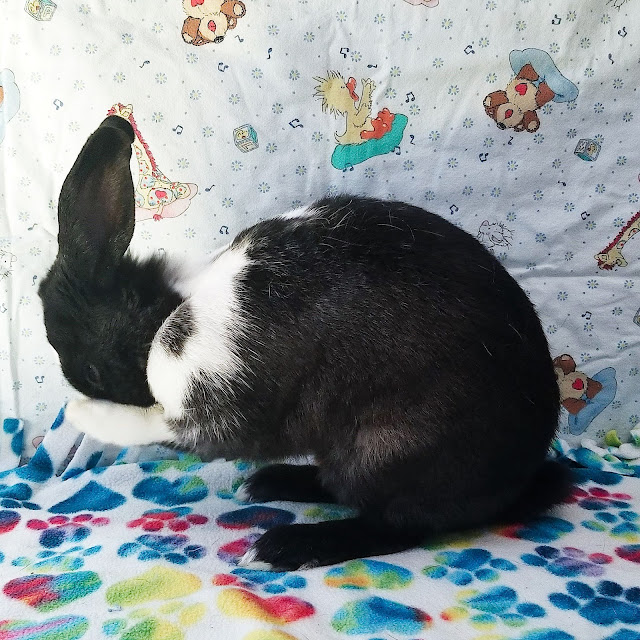 Serenity now! The hoomins better clear out for the long weekend like they promised. Serenity now!

PS: Cupid is looking for her forever home. You can learn more about her here.

NOTES: Contact us for more information The BHRR fundraiser is still going on and is over the 3k mark! :-)
BHRR: http://bhrabbitrescue.org
Fundraiser: https://www.gofundme.com/brambleyhedgerabbitrescu

Posted by Mister Bun at 6:37 AM No comments: 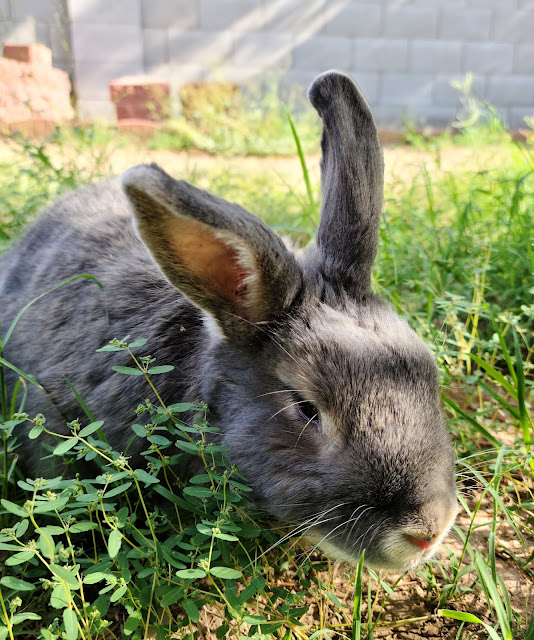 PS: Inspector General, Bubbles, enjoying her eight year at the Dessert Warren. Thanks for giving all the buns a chance! 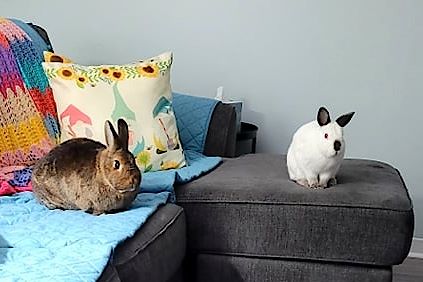 Sit down, hoomin, and let's talk about how you refuse to double our carrotini rations. Call it an intervention if you like.

PS: Follow Jake and Cinamon on their FB page at Jake & Cinamon!