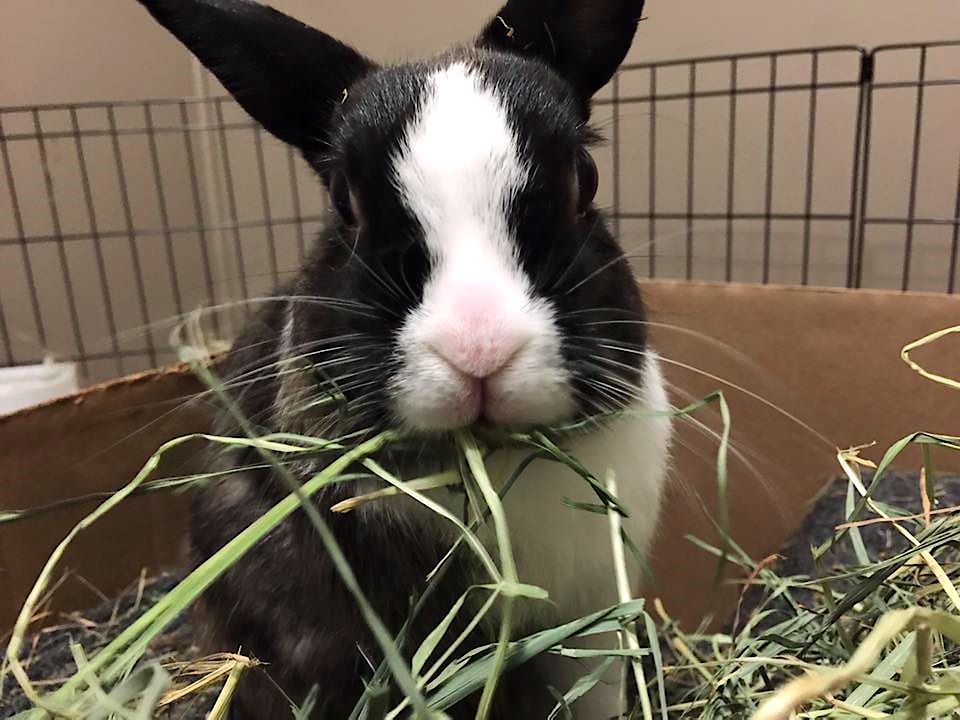 We set out to raid the parsley patch. If we didn't get the remaining veg, overnight freeze probably would. So we sampled at will, leaving as little as possible to the change of seasons. We moved in pairs, looking out for one another, vigilant, trying to stay one step ahead of the next thing that can eat us. Of course there was nothing to worry about; this time. I enjoyed the smells of a warm day, the ground and greenery. 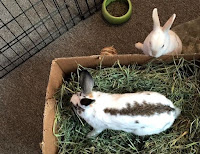 I retreated back under the tree for a nap and Abby joined Suzy and Molly. Bruno sat next to the house, taking in all the sun he could.
Flopping in the wild is so much more fun than indoors. Under the fir you get the best mix of smells from the ground, the tree and the surroundings, every little thing so ordinary and precious at the same time.
I hoped for a short nap, but the birds singing and the ambient sounds were too much. I couldn't really nap or sleep. It still felt good to be there. There was too much going on so thinking about napping turned out better than napping itself.
When the girls came back, with green moufs and fresh veggie breaths, we thought it would be nice to dig some more. Soon, It would be time to head back, so why not get good and dirty. 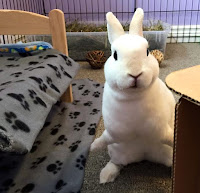 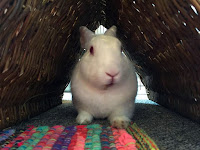 That's what we started doing. Suzy watched over us, chewing a twig. She spat it out, picked up her vest, pulled out a chunk of dried carrot and started chewing it. We looked at her. She stared back at us …. "What?!?" … and she kept on chewing, slowly, she started to grin, almost busted out laughing. "I wish I had my sunglasses" she said smiling. "I'd really look like a mean boss!" We nodded. Well, I felt relieved knowing I wasn't the only one that packed extra supplies for this trip.
The hole kept getting bigger. We were making it pretty tall and wide. By now it had to be a few feet deep, maybe more. We didn't care to measure it. The dirt wouldn't fly out all the way out so we took turns moving it back. Molly would be deep into the opening shoving dirt back, I'd stand behind, shoving it back some more. We went on and on like that. We were past the topsoil and into the sand. It was compact, hard and moist, containing more and more gravel and pebbles.
It was Abby's turn to lead the dig and Molly was behind her, moving stuff back. Abby could claw a lot of dirt fast and Molly struggled to keep up.
All of a sudden we heard Apollo, "Somebunny check on Abby! Abby, are you ok? Her heart rate spiked off the scale!" Abby was trying to back out, thumping strongly. Molly got out of her way fast. Abby kept moving back as fast as she could, thumping all the way. She did couple of furious wheel abouts as soon as she was out. 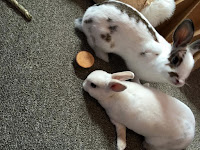 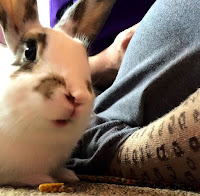 "What happened?" asked Suzy. We were hyperalert and anxious. "Apollo, she's out, she's ok, but very upset, hold on…" continued Suzy.
We got close to her, trying to help her come down. She was still gazing toward the hole and panting, her eyes fixed on something, we couldn't tell what. It was hard to peer into the hole, it was deep and dark. Abby continued to be speechless, she was settling down, her thumping stopped.
She raised her front paw, point toward the opening and whispered "Something's there."
"What? What is it, what did you see?" asked Molly.
"I don't know. I was clawing some sand and suddenly the ground felt soft. It felt flexible. I pressed down on it and it gave a little way. When I moved my paw back it sprang back into place. If there was something hollow underneath I thought it should cave in, shouldn't it?"
She looked at me and stared into my good eye, still frantic. 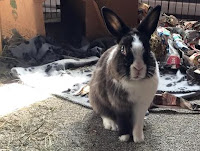 "Should we check it out a little more?" I asked.
- Thank you Renee!
Follow Suzy, Molly, Abby Mr. Toes, Frankie, Apollo and Zeus on FB
Posted by Mister Bun at 9:51 AM

They found the gopher that tore up our lawn! I do not know where these adventurous little buns are living, but I'm pretty sure that our gopher has teleportation powers and can show up anywhere on the planet! We are ashamed to admit that the gopher is just smarter than us, and we were not successful in discouragng him from destroying the landscape. However, if indeed they did discover the gopher, bunnies are much smarter than hoomins, so maybe they will have more luck in reasoning with him...
-Jen (Kohl's mom)

Come on, you guys, they are called "wildlife." Don't you want to have something to say when people ask, "How's your wild life." Hmmm, not from Montana? Not beer drinkers? Well, anyway, as I always say, "The best news any of us will get today is that there is still something alive out there."