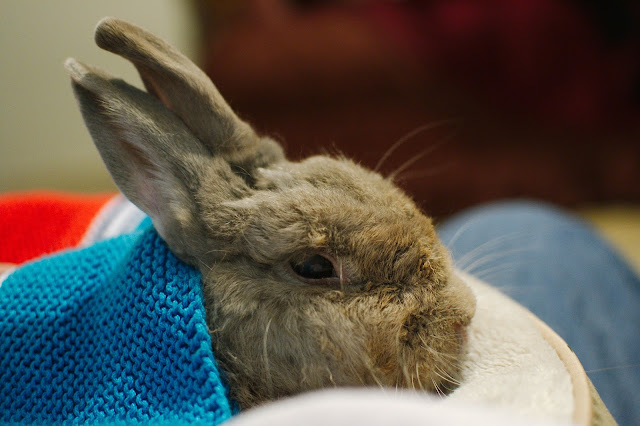 Resting after bum baf. Hoomin put me in the round, soft thing, covered me up with Auntie Jane's knit and administered headrubs to no end. I think I snoozed. After the I got the usual powder, I disapproved and fussed, eventually settling down with a treat.

Hoomin said I keep him on the straight and narrow at the tarpits. He says every time he gets a brilliant idea for a soliloquy on something or other, he looks at a drawing of my mouf on his computer screen. I sayz to him "Don't do it man, don't do it!" he sayz.  Then he rolls up his yapper and he iz a good code monkey again, he iz.

Why do I have to keep reminding him that he's there to make my saaaalad monies?!? Hoomins.

On a sour note, my sneezing has not improved significantly. I'm afraid he'll talk to the vet again. Hm....

My scald spots are healing well and he keeps trimming the more hairy, matted bits.

So there you have it. We'll keep on keeping on and we'll keep you posted.

AWwww little guy. You both are working on it so hard - it is tough going sometimes - keep at it!

So sweet :) Hope you find something to soothe your sinuses, little guy; perhaps nebuliser treatments? You will NOT like it, but it is known for clearing up sinus issues in bunnies. Hope you are feeling better soon!
-Jen (Kohl's mom)

Mr. Bun, if you take that knitted thing and roll it up long ways like a jelly roll, it can be another adjustable, washable round soft thing, at least the sides...your own little fort. You have a splendid human. I think he has a very clear idea of what his job/purpose is. But, it is soooooo hard sometimes. Why don't you play Dilbert bunn once a week, and say what he would have said. Or, just show the appropriate face when Dilbert bunn hears something like, "Meet your new boss."