Author's Note: Last week, Mr. Toes recalled how he and Joey had an impromptu feast of fresh, wild greens by the edge of the woods after they were done with the repairs to their ship. Joey continued to build his friendship with Hopmeric. The bunstronauts were almost done modifying the powerplant of their spacecraft.
I woke up and sat up at attention. I felt the ship tremble ever so slightly; something had happened. When I got to the flight deck, Molly and Pancake were in the middle of running some systems check. "What happened?" I asked, still half asleep. "We're just testing that skid you fixed," answered Pancake slowly, drawing long pauses between the words, paying attention only to what she was doing. The skid was lowered, and the ship was resting on its freshly healed limb. Joey was already outside, removing the stone slabs we had used as the brace for our ship. Afterward, he started playing with the loader. Yes, Hopmeric was with him. Once I realized we were safe, I finished my morning grooming, nomming, and ship chores. 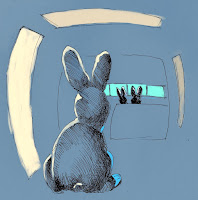 Mr. Toes wakes up
I went to check on Abby in the engine room. She, Penny, and Ava were sitting and staring at the modified reactor. Their mood was rather somber.
"So, what's left?" I asked. "Run the wires to the flight deck, fasten them to the structure, so they don't snap off during the launch," Abby recited grimly and slowly without making any eye contact.
"How are the numbers looking?" asked Ava quite excitedly, dissipating the glumulonimbus cloud that took over the room.
"I still have to finish that. Polar orbit OK with you? I can't quite recall how we re-entered. What was our inclination, ten, thirty degrees? I've no idea," I muttered.
"Neh, it doesn't matter. I think I know where that cloud of debris was; we can use the polar orbit if you want. The window we have to hit is very tiny no matter how we get there. I'll help you in a minute," said Abby, coming out of her bad mood.
Well, I went back to my console and prepared everything. We just had to correct the launch parameters so we could hit that location Abby had in mind. As I waited for her, I took a look outside. Joey was still on the loader with Hopmeric, still doing something with the leftover stone slabs. Joey was standing them up and arranging them in a semi-circle for some reason.

Abby and Pancake in the engine room

"Hop" and Joey
I put him on the speaker at my console and listened to him for a while, "... cause you have to give it some form, Hop. Hop, how's that stogie? You're not supposed to eat it, you know, just chew on it as I showed you. So, we can have some fun with those stones. We could put them up in a pile, but that would be just a pile. You see, when we arrange them in a half-circle, we gain balance and symmetry. And every bunny likes circles. Do you like circles, Hop?"
Of course, "Hop" didn't feel like contributing to the conversation. I had to admit it would be great to witness Hopmeric's first contribution to any conversation. I pondered how Joey did care about his "piece." He was diligently hauling away the stones from the ship to a safe distance, beyond the reach of our main thrusters during the upcoming launch. Out by the woods, they might survive our takeoff and give the bipeds something to ponder for centuries to come. And I like to think of Hopmeric as the proper co-author of this... "piece." The conversation on the speaker died down as Joey worked hard and talked himself through the handling of another slab. This one he placed across the top of two others, like a cross beam. When he turned around to get another block, he came right up to the window. "So, what do you think, Major?" Joey boomed through the speaker.

Joey and Hopmeric
The voice was his, but the rest of the sight took a second to process! He wore his antique, aviator sunglasses, a red bandanna sat on top his head, and the sleeves of his flight suit were tied in a knot around his midriff. A lit-up catnip stogie hung out of the corner of his mouf. He even managed to decorate Hopmeric. The poor beast sat right behind Joey and sported sunglasses as well. Chewed up bits and pieces of catnip where stuck all over his mouf. I guessed he either ate the thing or lost it. I had hoped it was the latter.
"I'm speechless, Joey. When is the Grand Opening; are you going to have a reception?" I laughed. "This evening, Major. Bring a quest!" Joey played along.
He gently turned around the loading dolly and floated away to pick up the next piece of his installation. Underneath that easy-going smile of Joey's hid a ruthless professional. When he picked up the next stone, he was all business even though he was cutting up with Hopmeric. As he built his stone composition, Joey handled the pieces as carefully and precisely as if they were parts of a satellite on orbit. His exactitude and self-assurance in creating his art project were worthy of the most demanding of jobs between the Sun and Pluto. 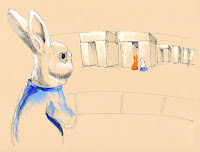 Abby looking over the installation
Abby and the rest snuck up on me while I was lost watching Joey work his magic. They stood there for a moment, gaping at the stone arrangement, and listened to Joey make fun of the bipeds, "... they'll be scratching their noggins over this forever, I tell ya, Hop! Mark my words, we could come back here in a thousand years, and they'll be on oning and oning about it. Hey, how's your stogie there? Oh, didn't you lose it again? You want another one?" Joey was enjoying himself, "Major, I tell ya, you gotta tell the others to come out and play. It's such a beautiful day outside!"
Pancake stood next to me, shifted her footing and said, "He's got a point; he's got a point, I give him that."
"OK, where are we, Toes?" Abby herded us back to work.

Mr. Toes
Ava and Penny finished installing the trigger cable from the reactor to the consoles on the deck. We installed a pair of toggle switches between two seats in the first and second rows of the consoles. The bun on the right or left of each switch could throw it and inject the pressurized cadmium chrono-chromium into the core of the main reactor. Of course, the injection was supposed to happen automatically, but Abby wanted a manual backup. All that a bun had to do was get ready when the switch flashed yellow and flip when it flashed red. The window to throw the switch was only a few seconds long, so the timing would be critical.
When we checked on Joey again, he and Hopmeric sat in front of this, I presumed, finished piece. Abby tilted her head and mused, "Why can't we have that picnic we wanted? Isn't that why we came here in the first place?"
Credits:
- Renee: taking care of critters, photography
- Mr. Bun, Ijon Thichy The Nth: story, illustration
- Mrs. Angie: editing

Follow the Characters of X Plus Bun on FB
On Instagram @dollyalittledisabledrabbit
Visit our About X Plus Bun page to learn more about the cast members and catch up on other stories!
Posted by Mister Bun at 5:26 PM