Author's Note: Last week, Mr. Toes recalled how he and Joey repaired the damaged skid of their spaceship and how Joey became more bonded with Hopmeric. We rejoin them as the bunstronauts are cleaning up after the skip repair.
"Once the applicators started activating the repair compound, we had to back away from the skid. The amount of heat released from the spreading sealant was enormous. You could roast a carrot in it. You would burn it, most likely, and your whiskers too, so don't try it."

Noming - Study 2
"How come I've not heard of that stuff?" Zoomer interrupted me.
"It's old technology; they don't use it anymore. We had rented a junker for that trip, remember? Check it out if you don't believe me," I responded. Zoomer squinted her eyes a little. I couldn't really see them, but I knew where they were, and I did see her brows twitch just right. Her hair was sticking straight out in every direction, and her mane moved a bit and became lit up by a streak of light that blasted its way inside the capsule from another orbital sunrise.
"Well, OK then, go on..." said Zoomer and I went back to the story again.
So, Joey and I set the hover-stand on the ground, and we cleaned up after the repairs. Even down on the ground, we could smell the metallic, burnt air coming off that healing skid. Hopmeric disappeared somewhere since we last saw him and Joye got a little frantic about it. Time after time I had to pull him back to the task at paw. Then we saw him. Hopmeric sat next to Molly on a small, electric utility cart. Where in the heck did find that? She drove it straight at us and braked in a hard turn to avoid us, kicking up dirt and dust. Debris and scrap filled the back of her cart. Whatever they sawed off best had to be thrown out because there was no sense lugging the dead weight to orbit. We helped her unload it.
"Abby wants to bury it in a shallow pit under one of the engines. We'll vaporize all the trash during the lunch," said Molly, running out of breath as she frantically hoped on the cart and drove back to the ship.

Molly on the cart - study 1
Hopmeric stayed with us. I got everybunny clear of the skid and released the applicators. They fell and hit the ground with a thud like a bunch of slain, monstrous serpents. I wondered for a while if we had to stow them away but, we decided to toss them with the rubbish.
"Hey, Hop, you wanna give us a paw here?" chuckled Joey. But Hopmeric didn't move, just kept observing us quietly. I had a feeling his gaze was becoming more penetrating. He was rubbing his paws a lot and looking at them. He would wiggle his toes and look at them as if he was seeing them for the first time. He would turn his paws every which way and watch them some more, then look at me quizzically before going back to his paws.
It was getting dusky when we finished, and I was starving. Joey and I sat down on the hover-stand, and we pulled out some snacks. Hopmeric followed us like a shadow, of course, and we shared a few bites with him. Joey passed around a thermos with chamomile and mint tea, and it tasted refreshing. Even Hopmeric enjoyed it. He was apprehensive at first about anything coming out of a thermos, but this tasted good, and he drank most of our tea.
"That's right, Hop. That's the proper, good stuff!" Joey quipped and carried on, "This is gonna make your tummy feel good and won't do anything funny to your head," and he ribbed me after that. Joey moved closer to Hopmeric and scratched him behind the ears.

Molly on the cart - study 2

Molly on the cart - study 3
I kept staring at the sky and the edge of the woods making up the horizon where the sun just disappeared. The air became considerably cooler, and the mist was starting to settle in. This had to be one those sunsets that are best watched from three, maybe five thousand feet up in the air. Not only do you get to see the sunset, but you get to watch the whole world around you turn dreamlike, and a little surreal as it settles in for the night.
I finished my chew bar and noticed that Hopmeric started to sniff around on the ground. "Hey, Joey, let's go for a little ride," I said and turned on the hover stand. "Where are you going?" asked Abby in my earpiece. "We'll go to the perimeter and look for some fresh grass. I think Hopmeric's getting hungry," I responded. "OK, I'll watch the radar for you; keep the flame on. At least try to keep the owls away," said Pancake. Joey tried to get Hopmeric to follow him onto the stand, and he did. Where we sat under the ship resembled a desert moonscape. That's what our landing did to this spot. We still had some light in the sky, so I thought we could venture out. We ignited the flamethrower, and we kept close to the hover-stand. We got to a spot where the grass and wildflowers were doing fine, and Hopmeric had a blast. Joey nomed the wild chamomile and talked to "Hop," as he called him now, the entire time. We had all the hyssop, daisies, and wood cranesbill that we could stand. My breath smelled like a garden.

Hopmeric study
I tore out as much of the fresh grass as I could to take back to the ship.
"Is anybunny watching the infrared cameras?" I asked. "Um, we got a few, faint signatures, no movement though ... and you're the brightest spot on the screen," came back Pancake. Like Joey, I had the bipeds in the back of my mind. I didn't fancy getting surprised by a sharp stick in my hide.
When we returned to the ship, everybun enjoyed the fresh, wild greens and we caught up on the status of our chores. The "reactor crew" was exhausted and knocked off for the night right away. Joey and I stayed up for a bit longer. Joey wanted to get on the sim, and I needed to get going on the numbers we needed to get to orbit. 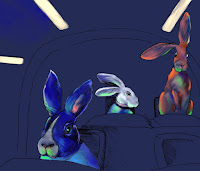 Toes, Joey and Hopmeric at the consoles 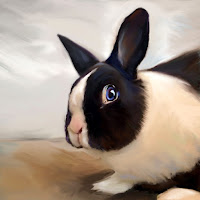 Mr. Toes
Joey convinced Hopmeric to get up on the couch of the console next to him. He took a checklist he had to work with and explained it to Hopmeric from start to finish. "Major, I tell you, Hop would make a great pilot. He's a natural!" Joey was getting excited, "If he only had a half a chance, I tell you! Half a chance! Why don't we bring him with us?" Joey pressed on.
"Don't even think about it, Joey. You'll be missing an ear; Molly will see to that," I dumped some cold water on his idea.
I tried to work on the trajectory math, but my head was getting fuzzy. I shut down my station, turned down all the lights, and looked outside at the starry night. Behind me, Joey kept on talking to Hopmeric unabated. He went on and on about all the buttons and switches on his console. Maybe it's better that Hopmeric couldn't understand a word Joey was saying to him, or he might have died of boredom. He didn't understand any of that, did he?
Credits:
- Renee: taking care of critters, photography
- Mr. Bun, Ijon Thichy The Nth: story, illustration
- Mrs. Angie: editing

Follow the Characters of X Plus Bun on FB
On Instagram @dollyalittledisabledrabbit
Visit our About X Plus Bun page to learn more about the cast members and catch up on other stories!
Posted by Mister Bun at 11:58 AM