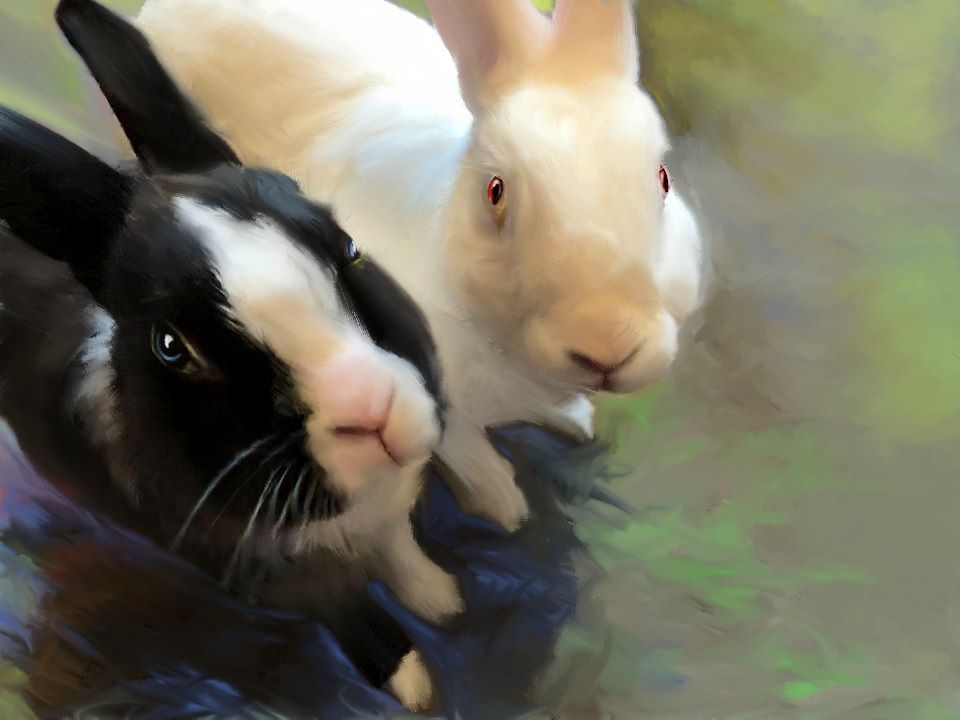 Author's Note: During the last episode, Mr. Toes told us about the crew's effort to save Hopmeric from an incurable infection. The bunstronauts also had their first glimpse of the damage done to one their ship's landing skids. Joey brought on board the vessel a small sample of the substance wedged in the gash of the landing skid.
We looked at Abby, puzzled, and Pancake asked, "What lucky break are you talking about?" On the table in front of us was a piece of cadmium chronochromium that most likely came from that cloud of debris we had hit before reentry. Pancake was not impressed, "If you look closely at the hull of this ship, you can probably scrape off a ton of iron and nickel that came from that cloud. I still don't see how this is helping us." 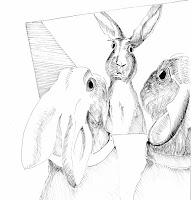 Hopmeric in the infirmary
We were interrupted by the warning light on the infirmary annunciator panel. Molly didn't say a word and rushed to check on Hopmeric. One of the monitoring screens did, in fact, show Hopmeric sitting up and trying to drink some water. His vitals looked normal. At least his temperature didn't point to an infection. He looked tired and could barely keep his balance, and after a minute stretched out with a big yawn and sighed. I thought he'd go back to sleep, but he stayed awake. Next, we saw Molly enter the room and give him a good lookover. 'He's doing fine!' exclaimed Molly over the intercom, her voice sounding scratchy and distorted by the old audio system.
She pulled an alfalfa chew bar out of a a pocket of her suit, took a little bite of it, then put the bar next to Hopmeric's mouf, hoping he would bite. He sniffed and sniffed the bar for a while and raised his head. It looked like he was slowly working up the courage to taste the snack. He licked the bar once, then again, and very gingerly bit off a tiny crumb from it. His mouf worked ever so slowly. Under other circumstances, you would think he was judging and savoring the finale of a cook-off of some sort, but his tired eyes pulled you back to the grim reality that this guy's life hung in the balance. We forgot all about the chrono-chromium for a while. 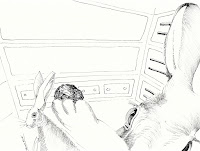 Molly and the giant pellet
Hopmeric took another small bite of the snack and started chewing it. He drank more water and ate a little more. We watched and watched, quietly rooting for him. Molly checked around his bedding and rummaged for something, and presented to the camera a. . . big, fat pellet! We erupted in cheer over the intercom! Poor Hopmeric, either embarrassed or startled, sat up straight and suddenly looked very alert if a little disoriented, not able to tell where all those voices were coming from. Molly stroke the back of his head to calm him down. He relaxed and laid down again. As Molly turned to leave Hopmeric sprung up, ready to follow her! I shifted my stance from one foot to another and held my breath. Molly stopped and looked at him, as if not sure whether to convince him to stay put and rest or to help him move along. Hopmeric slowly caught up with her before she could make up her mind and they worked their way toward the flight deck. We lost the visual of them once they left the room and it took them a long time to rejoin us. Well, to me it felt like a long time.
We didn't know how to react when they arrived, and we just stood there quietly, sizing up Hopmeric. I'm sure he was doing the same with us. Molly stood by his side and administered head rubs behind his ears. She fed him another bite of the snack bar, and this time he took a nice, big bite of it. To break the tension, Abby decided to pick up where we had left off as if nothing had happened. "OK, so, about this chronochromium..."

Hopmeric on the flight deck 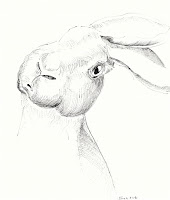 Hopmeric study
That's when I got a queasy feeling in my gut. I knew what Abby had in mind. She must have noticed my grimace because she looked at me with a mischievous smile and said, "When we get to orbit, we can inject it into the reactor and make it backfire. It will probably blow us up into gravitons, but going through the ensuing rip in the fabric of time-space will send us back to where we came from. We will be mixed with the chronochromium, and that stuff likes to gravitate toward the time it came from!" Abby kept grinning.
Molly thumped, Joey almost fainted, and I had to sit down. Hopmeric dropped the chew bar from his mouf as if he understood something. Pancake just kept staring forward as if she had seen a ghost of herself and didn't say a word. Ava and Penny, not amused, groaned. My legs felt a little rubbery. Would I have to say goodbye to myself? Would it be appropriate now to try and kiss my duff goodbye? Should I write a note to the other me, the one that is going to get reconstituted? Do I get a fresh start on that, other, new, same old side? Can I rearrange myself, make some changes before I get put back together? Could I, somehow, change timelines and go back to my Mom in her parallel universe, yet keep with me everything I've been through until now? 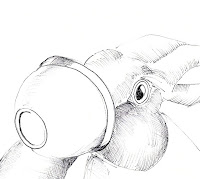 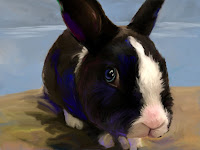 Mr. Toes
"Hey. . . " somebun was scratching me behind the ear, "are you OK?" At first, I didn't recognize Abby. "Yeah, I'm OK," I mumbled. Abby continued, "We've got no other options. It's either that or we stay here. I guess we could vote on it." Everybun around me shook their heads no. There would be no vote on it, and I agreed with them. Hopmeric sat there, tilting his head sideways and thumping from time to time. Part of him had to be catching on to what was going on.
Everybun except me followed Abby to the engine room. They were gone for the rest of the day, trying to figure out how to feed the cadmium chronochromium into the reactor at just the right time. I crawled under my couch and pulled out a titanium thermos I hid for times like these. I took off the screw-top cup, opened the pressure relief valve, and filled the cup with the carrotini. I took a swig and showed Hopmeric how to do the same. The poor guy tried to get his mouf into the cup and spilled half of it on himself. He tasted the stuff; his mouf twisted, and his eyes crossed, but he slurped the rest. I filled the cup again, and we relieved more pressure, repeating the ritual. Hopmeric minded it less and less.
Credits:
- Renee: taking care of critters, photography
- Mr. Bun, Ijon Thichy The Nth: story, illustration
- Mrs. Angie: editing

Follow the Characters of X Plus Bun on FB
On Instagram @dollyalittledisabledrabbit
Visit our About X Plus Bun page to learn more about the cast members and catch up on other stories!
Posted by Mister Bun at 11:56 AM

This may not turn out well ... I am glad I am not with them.

Interesting story and stellar artwork. Feeding the reactor with the correct material at the right time is a tricky business. ken&kaci