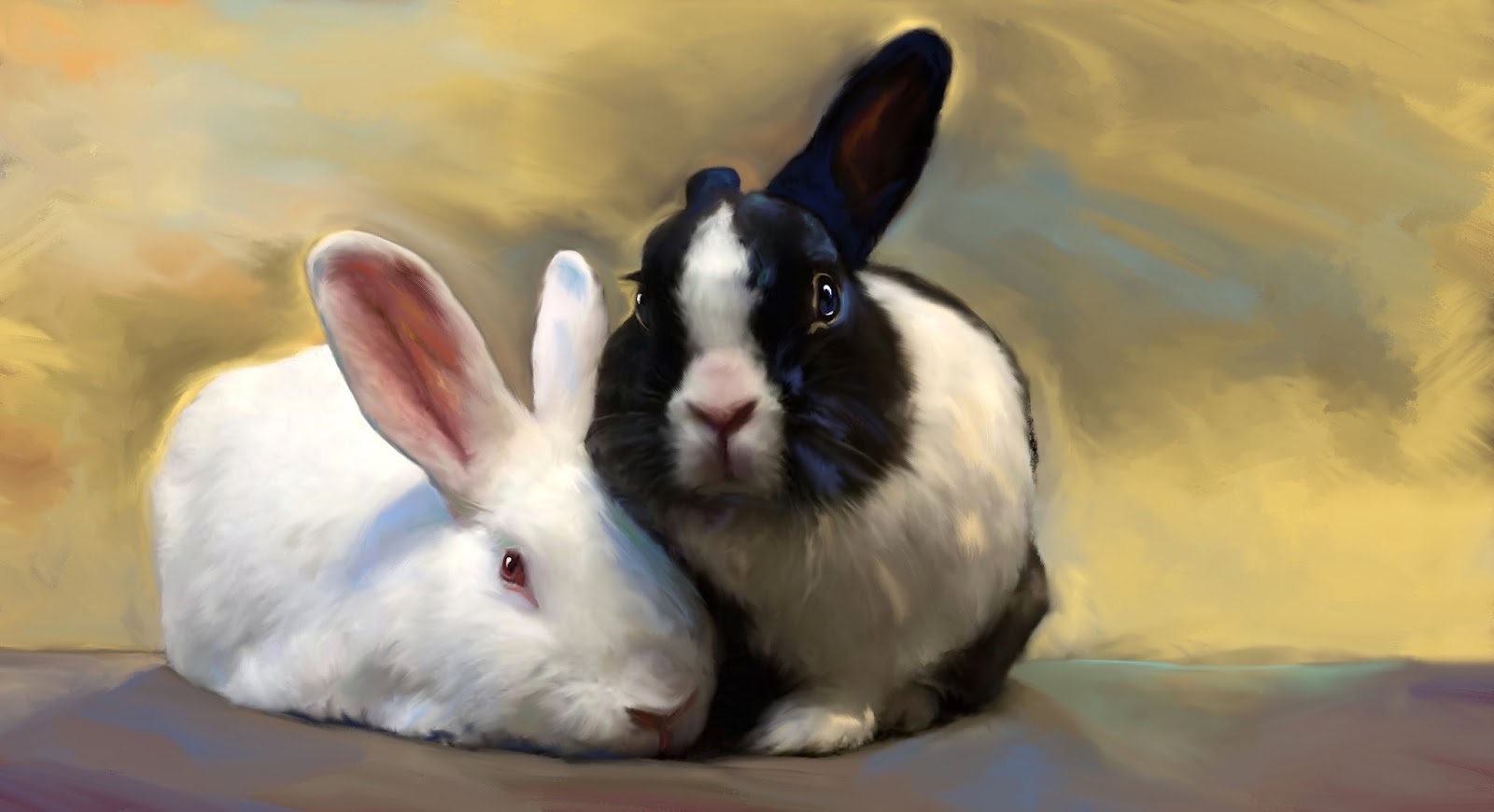 Author's Note: Last week, Mr. Toes and the crew cheered for Hopmeric as he started his recovery from treatment for a wounded leg. The bunstronauts also discussed their options for making the journey back to when they came from.
I woke up shivering in the middle of the night and wondered what had happened. Hopmeric was on the couch next to me, covered up with a blankie. I guess somebun had taken pity on him. He kept gritting his teeth, and his mouf and nose kept twitching. I went to the litter bin and then tried to find something to cover up with. Before crawling back and settling into my couch, I saw a note in Abby's pawwriting, "You're patching the skid first thing in the morning!" I crumpled the note and tossed it. I just hoped my head would spare me when the sun came up.

Joey, Mr. Toes and Hopmeric study
In the late morning, I got Joey to help me work on the skid. As luck would have it, we got another one of those picture-perfect sunny days with a gentle breeze and the aroma of the nearby woods in the air. The sun decided to be extra bright, though, like I thought it would. My head did not like it one bit, so at first, our progress was slow. We cleaned out all the cadmium chronochromium dioxide from the gash and collected it into a pale. That's when we got a proper look at the extent of the damage.
The outermost layer of the protective armor system was blown off. That made sense since it was a fairly light substance, designed to dissipate the heat and not protect against the vaporizing forces of impact with a foreign object at orbital velocities. The next layer, designed for just such eventualities was caved in and gouged out almost all the way through. In the bottom of it, you could see a series of thin cracks in the material. It looked like the bottom of a dry lake, parched and baked to death by the sun. The hot plasma during the re-entry almost got through. Behind the damaged layer, the secondary heat isolator shuttered and exploded. Thus the well housing the retracted skid was left, essentially, unprotected. And behind that was the rest of the ship, open for the melting. I gulped. I've seen the damage done by collisions with nuggets of iron and nickel, but nothing like this.

Joey study from The Bunstronaut Painters
Joey tilted his head and furrowed his brows. Before he could say anything, I blurted out, "We don't have enough material to patch it, do we?" "Nope, Major, we don't," growled Joey. "Check the numbers to be sure, would you?" I asked him, but Joey was already on it. In my earpiece, I heard the noises coming from the engine room. A high-pitched drill or a saw. Somebun was banging something with a hammer. I think I heard two hammers, devastating something in a brutal rhythm of two buns taking turns and swinging the heavy blocks of iron on sticks.
"Stop! Everybunny stop! Right now ..." I screamed into the intercom. Things got quiet, and Abby came on, "It better be good, Toes." I looked at Joey, and he shook his head in silence, "We don't have enough patch material to repair the skid for re-entry."
"What do you mean?" Abby responded. She had to have known where I was going with this, but she was stalling form some reason.
"Well, you know,..." I started slowly and went on, "we won't be able to re-enter with such a light application of this stuff. It will ablate, the gear will melt, and you know the rest." The silence continued and after a moment so did I, "What I mean is, whatever you're doing to the reactor, you better be sure of it, because we won't be able to come back here if it doesn't work. We need a proper dry-dock to fix this up to spec. We only get one trip to orbit with this thing."

Joey and Hopmeric study
After a second or two I heard the distinct change in the audio tone in my earpiece telling me that Abby put me on mute. She muted me! She came back after a little while and said, "Rog!," and all the banging and sawing, and drilling resumed.
"Well, I'll get the compound ready, Major," said Joey, sounding mournful. We both fixed our gaze on Hopmeric, and a sense of finality washed over me. Up until now, I have tried to keep a light attitude toward our predicament, but now I had to admit we could do everything right and still come up short. Maybe that's why Hopmeric looked different to me all of a sudden. He might be only one left here to carry on after us. Maybe by fixing his leg, we have handed our baton off to him? Hopmeric sat on the ground and watched Joey and me. From time to time he would go inside the ship after Pancake or Abby, then he would hop out and watch us again. He went on like that the entire day.
Finally, Joey nudged me out of my stupor, and I raised the hover-stand even higher and closer to the gash in the skid. I started placing the small flat repair pods on the surface of the wound, around its perimeter. They looked a little bit like sand dollar shaped electrodes with metal clad feeder lines attached at their centers for delivery of the raw, powdered, repair compound. When I had them all in place, Joey had to throw a switch that would release the patch material stored in a high-pressure container through the feeder lines into the electrodes. There, the fine powder would be activated and crawl all over the wound. It would grow and spread on the surface like algae before finally heating up and bonding with the armor. Eh, how I wished we had enough of it for several coats so we could do the job right. 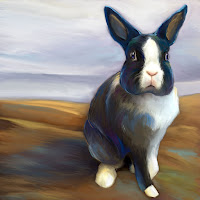 Mr. Toes
I waited for Joey to throw the switch on the applicator pump, "Ready when you are, Joey!" Nothing happened. "Joey?" I asked again. Joey was still looking down at Hopmeric sitting on the ground, looking back at us. "Hey, Joey, what's going on?" I asked as I tapped him on the shoulder. He looked at me for a second and turned his attention back to Hopmeric. "Maybe we can let him throw the switch? Wanna bring him up here? I wonder if the bipeds are watching us, you know," mused Joey. "Come on, Joey, just throw the damn switch, you can play with him later. If we bring him here, he'll have a heart attack. Later you can show him how to enjoy a catnip stogie, OK?" Joey grinned and threw the switch, "Guess you're right, Major."
Credits:
- Renee: taking care of critters, photography
- Mr. Bun, Ijon Thichy The Nth: story, illustration
- Mrs. Angie: editing

Follow the Characters of X Plus Bun on FB
On Instagram @dollyalittledisabledrabbit
Visit our About X Plus Bun page to learn more about the cast members and catch up on other stories!
Posted by Mister Bun at 11:28 AM