Author's Note: In the second episode, Mr. Toes and his friends started to assess the condition of the tumbling ship. They were beginning to discover what had happened to the drifter and its crew.
Freddie kept looking for signs of a terminal failure that could have caused the death of the ship, but he found nothing. Entire systems and subsystems had simply gone offline one by one. A chronology of how they went dark had emerged, however.

Freddie
Freddie noticed something peculiar in the logs of the ship. The main computer had accessed everything it could that belonged to the fantom crew. Those bunstronauts only existed as a set of data points, a model or a set of models to be exact, so that the main computer could interact with "them." To the machine, "they" were as real as they could be. Just about the only thing the computer couldn't do with them was to bleed them. It had monitored their vitals, emptied their litter bins, and refilled their hay and salad holders. But why had it started going through their personal stuff? Music and book libraries, for example, were among the places it had digged into. All those things were available at the Central Library as well, and there was nothing new in what the crew buns enjoyed, but the question remained: What was the purpose of that perusing the machine had been doing? Had it been trying to get to know "them" better? Was this part of the original program's or experiment's design, or did the machine take it upon itself to learn about the crew? The ship had shown a particular interest in philosophy and over time stopped accessing materials on any other subject.
I almost choked on a piece of kale biscuit. We kept looking at bun another without saying a word. Finally, Pancake took a long sip from a beverage pouch and, with her mouf still half full of carrot tops, turned to Freddie: "Are you sure? It stopped on philosophy and ignored the arts, sciences, and everything else." Freddie didn't get a chance to answer.

Molly
"Um ..., look at this ..." Molly started to whisper. "It gets worse. If I'm reading this correctly, right here ..." Molly scrolled through a part of the log data on her monitor and paused. We stretched our necks to see her screen. "... Right here, it tried to contact the crew directly. Then something responded to it ..., and then all exchanges stopped."
"Do you think it had figured out there was no real crew onboard?" asked Penny, but no bun answered. I thought I saw Freddie shudder for a split second. Then again, it could have been a momentary glitch in our connection. Our flight deck felt much colder now. I glanced at the temperature reading on one of the biomonitors, but it had not budged from its proper setting.

As we kept on sifting through the data, we came across signs of the ship trying to reach other vessels and facilities. This wasn't your regular telemetry. It had scanned all the frequencies it could tune and then had tried to initialize contact. Of course, nothing responded. This explained the mystery interrogation that our own Buzzard had encountered a few months back. Our ship had flagged it as a penetration attack. The funny thing was that it didn't look like a penetration attack. The intruder didn't try anything nefarious, and we chalked it up to some kids playing mischief. I remember some of the crews on a break at our last stop at a resupply hub talked about something similar.
After that, the communication system went quiet. Something methodically powered it down, as if to get it ready for some major maintenance or an overhaul, except no maintenance or repairs followed. Next, the ship performed its final course correction. It had changed its trajectory to fly toward the sun and slingshot around it so it could leave for the open space. Afterward, the guidance and navigation disappeared. Attitude control went the same way, and the ship had become vulnerable to developing a tumble. 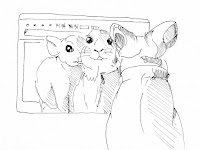 With the news buns
Freddie broke the silence after a good stretch of time had passed: "If you ask me, it looks like this thing ended up trying to quiet its mind. First, it turned off all communication systems. It stopped transmitting, and eventually, it stopped listening. It went blind. In the end, it slowed down its, hm... let's call it metabolism to nothing. It turned off all renaming systems and became as still as it could, short of dissolving into a quantum soup. The only system it couldn't touch was the logger, and even this one fell silent once the power plant shut down and the backup fuel cells run dry. Maybe it didn't care about it anymore?"
To complete turning itself off, the craft had gotten rid of its operating system and left us only with the activity logs. The logger observed and recorded what it "saw." It couldn't offer any explanations of what had happened.
We kept staring at the data, but after a while, I was not sure anymore of what we were trying to find. We were still afraid to miss "it" even though no bun was sure what "it" was.
Suddenly, Molly stirred as she reached for her sippy bag and said, "This is starting to read like a dairy." She sipped a gulp and floated toward the litter and supply lockers. "Bring you a snack, any bunny?" No bun answered.
"No, this is not a diary anymore. It's more of an obituary or a remembrance piece," said Ava.

Joey
When the delirium started taking over us, we took a break. We probably should have done it sooner, but the adrenaline took a while to subside.
Since our news bun friends had agreed to carry the story, it had become doubly urgent to get better control of this situation. We had found ourselves in the midst of a difficult debate. Should we have tried to stop the ship with our engines, let it go entirely, or tried to power up the main engines on the drifter and used them to stop the craft?

Breakfast on the flight deck
Abby wanted to forget this whole thing, the news story be damned. We were drifting along with the ship and sooner rather than later we would have to think about heading for home. She was getting cranky and snappy about it too. She didn't pull rank yet, but I had a feeling she was close to it. Ava and Penny stayed neutral, but Pancake insisted on staying with the craft. The news buns could rendezvous with us sooner if we could slow down this thing even a little bit. Joey was none too pleased. He wasn't getting his EBA anyway. He had excused himself and said that he would be busy with maintenance in the engine room. Freddie begged for a chance to power up the engines of the drifter. He claimed he only needed a couple more hours at this point because the crew of his Morsel was working the problem from the beginning and they were close to having a good hack on the procedure to power up those engines.
Abby relented a little. Her eyes were red and puffy. The fur on her mouf had started to get fleecy from the frequent washing and rubbing. I had not seen her like this in a long, long time. She turned the command over to Pancake and went to get a nap. Pancake's first order was simple: "Listen up, everybunny. Go and get some sleep! One of you can stay with me, but that is all. We have two ships to drive now, so you better disappear to take care of yourself for a while!"
Next morning, at breakfast, we were all quiet. Trying to sleep never works. Mix in a puzzle like the one we had been trying to decipher, and everything starts to blur. 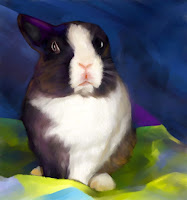 Mr. Toes
We were tired, but one thing had become obvious to us: We had to do whatever we could to get this to the news buns. Everybunny had to know about this experiment with a fully autonomous ship. The evidence of this would not burn up in the sun; not if we could help it.
We put Joye in charge of working with Freddie to power up the drifter's main engines. Joye became ecstatic, and you would think it made up for his EBA. His legs kept twitching from time to time as he worked at his console. I couldn't tell if he was trying to thump or brink from all the excitement.
I kept floating, spellbound. Maybe Freddie was right, or maybe the forensic team would prove him silly. The ship would not do anybunny any favors in solving its mysteries. We had an idea about what the ship had done but not what it had thought. It had taken that part of the puzzle with it to the void it had joined.
Credits:
- Renee: taking care of critters, photography
- Mr. Bun, Ijon Thichy The Nth: story, illustration
- Mrs. Angie: editing

Follow the Characters of X Plus Bun on FB
On Instagram @dollyalittledisabledrabbit
Visit our About X Plus Bun page to learn more about the cast members and catch up on other stories!
Posted by Mister Bun at 1:18 PM

Becoming self aware. Uh oh. Good thing the buns are one with the universe. Excellent artwork also. ken&kaci