I didn't get much sleep that night and woke up very restless and tired after only a few hours. Even before I crawled out of my burrow, I was ready to go back into it, but to my surprise, the little "Aha!" moments kept on coming. When we first approached the Behemoth, and it beaconed at us on what looked like every frequency known to bun, from gamma rays to visible light, it was trying to transmit on all the frequencies it knew. It learned about us quickly, though, and once we were inside, it knew that X-ray frequencies would not do us any good, literally.

Mel
The Behemoth taught us what we needed to know about it and then figured out we don't belong here. Did it compare us to some quantum entanglement registry and realized we're in the wrong time-space location?
I felt sorry for the passengers of the Behemoth. They were very deliberate in picking their destination and died on their way to it. Only a few survived the unfortunate encounter with the point where multiple dark matter waves crossed. There were only enough survivors to deploy and land just one pod around what's known today as St. John's, Nova Scotia. However, the ship logs said nothing about their origin. Have they, by chance, grown out of the Behemoth, or had it grown around them? Our lab-coats will have to chew on this one.
Groggy, I went to the pantry bay, thinking maybe a snack will help. I got hungry at last. On my way, I passed the first-aid station, and there was Mel, messing around with the "stasis-snake," an ingenious little device that relieves gastrointestinal stasis. The rush of adrenaline hit me hard and slammed the sidewall when I grabbed a paw-rail to stop. I woke up for good.
Worried, I asked, "Mel, what do you want with that? What happened?"
"I'm fine. Don't panic, Major. I am making a ton of snacks and stuff. I thought I would get this thing ready, just in case," said Mel. 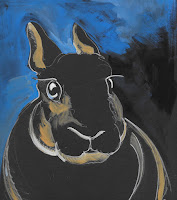 Hopper
We got some reconstituted carrots, nanner chips, a wad of parsley, some berries, and a few nutriberry cakes, and we headed to the astronavigation bubble. Mel couldn't sleep either; he was just too excited. I, on the other paw, was filled with dread. So, I thought, "Maybe a little stargazing would calm us down?" Passing by Hopper, we watched him snooze. His eyes were busy under his eyelids and moved about rapidly. His mof was working, too, twitching and smirking as he was gritting his teeth a lot. We moved on.
The view out of the bubble afforded us nothing but deep space. I placed myself so that no parts of the Behemoth were in sight. For a while, we enjoyed our makeshift "all-you-can-nom" space buffet. I nomed and nomed until I stuffed myself properly. I never felt so famished during a flight. I had hoped secretly that the next bite would clear my head about the impending decisions we had to make. Of course, no such thing happened. I just felt like I ate too much.
"Mel, how come you couldn't sleep? You can't wait to go back, can you?" I broke the silence. After a long pause, Mel looked at me, surprised, and nodded in agreement. I felt a squeeze in my gut and looked away. I stared into the open space, trying to locate the barely visible Rohan Nebula. A nutriberry crumb floated past my nose.
"We are going back, aren't we?" asked Mel with trepidation.
"Should we? Just because we can now?" I asked in return without taking my eyes off the stars. 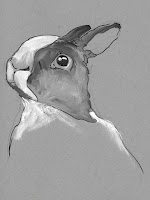 Mr. Toes
I realized we would be better off finishing the discussing with Hopper.
What scared me the most was trying to explain to our kind back home what happened here. Can we waltz back in and tell everybun, "Oh, you see, the ship is so advanced it TEACHES you how to fly it, and it LEARNS about you. Nothing to see here, now. Let us through, please!"?
Of course, back home, they will want to know what happened to us, on a molecular level. I don't think a post-flight physical will satisfy them. They will want to know the long-term effects of our exposure to the Behemoth. I am afraid they will want to keep an eye on us very carefully for a very long time.

Mel
Back home, the ship doing a lesson onto others before they have a chance to refuse it won't help us much. Whatever first paw knowledge our compatriots would gain from their encounters with the Behemoth would not absolve us of our unique status. We would still be the first ones; we would be the prime specimens, the "patients zero." Is it going to be all "berries and nanners – we are so glad to see you!" or something like "... Are you back? How fascinating; let us have a look at you and don't you dare come any closer!"
I was not worried about the public's view of us. We would be heroes for half a day, and that would be all. The suits, the lab-coats, and the uniforms would see to that. It's one thing to debate how far we have come as bunkind, and something else to test it on our hides. They don't teach "society survival" in bunstronaut training.
Should I be concerned about how they will use the Behemoth? Maybe they should wait their turn and develop similar technology in their own due time? Still, a part of me wanted to believe that no harm would come from bringing back home a space-time jellyfish like the Behemoth.

Hopper
Had any of the passengers of the Behemoth come back to life, would our lab coats and uniforms accept them as friends or at least as non-foes? I don't think I can count on that, not a hundred percent, and that's what had me worried.
We have entered another sunset on orbit, and once it got dark, the starlight felt even closer and more luminous. I turned around and watched how the Behemoth reoriented its energy panels. Deep space is where it lived; this was its medium. Mel was looking at the same show, still musing on something. I have lost my appetite again.
"Let's check on our friend, shall we?" asked Mel. I nodded, and we turned around in the bubble. Hopper was out of his burrow. He had his feet in a couple of improvised restraints on one of the walls and was doing bun yoga. "Downward Bun" in zero gravity is not easy and takes a lot of practice, but he nailed it. He had his eyes closed and breathed slowly. A sippy bag of something slowly turned around by his mouf. We stopped quietly so not to disturb him and watched him until he finished. Hopper then rose and stretched out with a huge yawn and smacked his lips. He opened his eyes, smiled at us, not at all surprised, rubbed his belly, and said, "I'm hungry. Did you guys eat already?"
We followed Hopper to the pantry bay. He was most appreciative of all the food that Mel prepared. I envied them their appetites. Afterward, we headed for the flight deck.
We faced one another in a circle and busted out laughing. We could suit up and go into the Behemoth, reset our coordinates in its navigation module, and we could be home for dinner. However, I had to state my case for not going back and staying right where we were, with Arthropods and all. I tried to entice them with the honors of seeing the first dandelions on this planet! We could explore first-paw all the ancient flora, or we could explore some exoplanets. We could do that and then come back to the same spot if we don't find anything we liked.

Mr. Toes
Well, Hopper said he knew what he wanted exactly. His family was waiting for him, and he wasn't giving up on them for a second. For a moment, Mel seemed to be on the fence about this whole return thing, but in the end, he sided with Hopper.
Hopper was convinced we had nothing to worry about. If we can't trust our own kind after all this time, then we have not advanced anywhere worth a pellet. This was but another test flight, just the stakes were higher. He insisted it's better to find out where we stand sooner rather than later. Testing the boundaries and pushing them no matter where we go is what we do to put hay in the feeder.
Hopper thought that once the lab-coats make it into the "control room" on the Behemoth, the ship will reveal itself just as it did to us. They will know what we know, no more and no less, and that will be the end of it. They won't weaponize the Behemoth or turn it against the bunkind. If meat-farm days are to return, it will not be because of the whole Behemoth affair. On its own merits, this incident will be but a footnote in the history of bunkind. If we are that fragile, then we do have deeper issues than bringing home the Behemoth.
I admired his optimism.
"Hopper, we'll have to set up a 'dead-bun-switch.' One that can still work a few million years from now," I said as I turned away and headed back to the astro-bubble.
Credits:
- Renee: taking care of critters, photography
- Mr. Bun, Ijon Thichy The Nth: story
- Mrs. Angie: editing