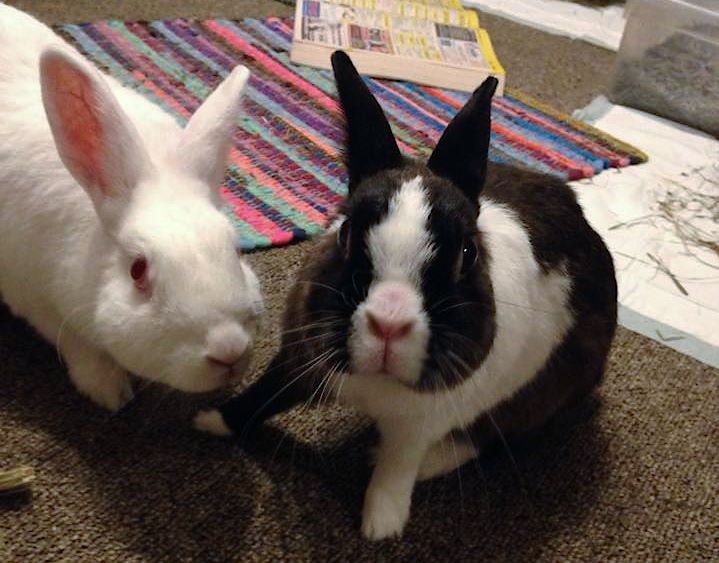 We started chinning everything in sight. This is our garden now and we’re marking it so. I started sniffing and inspecting greens coming out of the ground right around my paws. There was grass, little flowers, even some dandelions; fresh, crisp and juicy. I snipped one off and savored it. As I sliced through it, I tried to take in its fresh aroma. I had no idea how intense a simple green could taste.

We worked our way through the rows. Out of the corner of my eye I saw Molly and Suzy working over some parsley. Abby meandered across the rows checking everything out. Once in awhile you could see her pop up as she inspected greens from root to top. 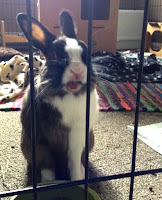 I started to wonder as I hopped from green to green. Who taught me all this, how did I know what to look for, what to avoid, what to do? When I got to the first bunch of kale, I took a nip of it and tore out a big chunk from its leaf. Sitting up and noming I tried to recall when I last saw my mom. I tried to remember if we ever went out into the garden? I couldn’t tell if what I remembered really happened or not.
I sat and nomed slowly, my attention dissolving in the tastes, smells and this surreal reminiscing. I was taking my time to enjoy this new life.

Mr. Toes didn’t notice Abby telescoping, yelling and waving her paws at him. In the adventure control room Zeus sounded alarm for everybunny to take cover immediately. Zeus and Apollo watched as an unknown object slowly entered the tracker screen, drawing a circular path. It took them a moment to identify it as a large bird of prey. At first they thought it was an eagle. As data poured in, Apollo realized it’s not an eagle, but a female hawk. Because they’re bigger than male hawks, sometimes they get mistaken for eagles.
Suzy and Molly immediately scooted off toward the fraser fir in the back of the garden. As Abby spun around to do the same she noticed that Mr. Toes appeared to have been lost in own world, oblivious to everything around him. She stood up and yelled, “Major, cover! We have to run!” He didn’t seem to notice her.
“Somebunny get his fuzzy bum before the beast does!” came on Zeus.
Abby rushed toward Mr. Toes and almost knocked him over. She grabbed his vest and started pulling him toward the tree, hoping he’ll snap out of his stupor. He followed her, looking frightened, slowly returning to the shared reality. At least they were moving and Mr. Toes started to pick up his pace.
The hawk was taking her time to survey the pickings from high up, more interested in finding decent updrafts than snacks. But the day was getting on and it was time to think of something to eat. Easy pickings were always welcomed. Finally, she spotted something, looking like bunnies, but not quite.
In her black vest, Abby didn’t look like a typical bunn. Her head did, but not the rest of her body. Without the vest, all white, she would stick out like a sore thumb against the ground. So it took a while for the hunter to catch on and decide she may as well try going for one of them. Maybe the one standing still? The others were running for cover. She started preparing for the dive, trying to predict which way if any, would her prize try to flee.
Zeus was giving updates second by second; Frankie and Freddie came out of their burrows; it was their day off. So did Izzie and Millie. They stood around, staring at the tracker, watching the bird circling, Mr. Toes standing still and Abby running toward him.
They could only hope the bunns would get to safety of the trees before the bird could get to them.

The hawk had to make a lot of adjustments and calculations before she could drop on them. How high was she, which way was the air moving, was it gusty or steady? Now, everything depended on a split second timing. Situation was a bit more complicated though. Those bunns, if they were bunns, run for cover much, much sooner than they should have. She’s never seen that before. They weren’t supposed to have an idea that they were in danger. As she pondered this anomaly, she pulled her wing in and started gaining a lot of speed.
That little black and white feller sitting still, … that’s just too bad. Something was running toward that little bun and the hawk thought she might get both of them! She was really picking up speed now.
Zeus could only watch.
The hawk was fully committed to the dive, she was making the slightest of corrections now. She didn’t see the red ball of feathers about to blindside her. A small cardinal crashed into her head, feet first, blocking out her vision for a split second. But the hawk had too much energy now and that little collision could not stop her. Then she got hit from the other side and her trajectory was seriously altered. A third and a fourth hit! The hawk realized what was happened. She was getting mobbed by cardinals. She was still in a dive, but she knew she was just plunging toward the earth; the hunt was over. Ironically, she was under attack. The cardinals could it hurt her too much, but they sure could make her life miserable. And they knew it. Their pounding on the big, older hawk was relentless. In his younger days she could have snatched one of them in mid air just to make an example of it for the others, but she was too big and too slow. They were quicker and more agile, they could strike fast and get away instantly. The strong, powerful and frightening bird was getting outmaneuvered.
The best she could do was to arrest the loss of altitude and try to get away from the impertinent little fliers. She would have to look for food somewhere else.
The bunns were really working hard, speeding toward the old christmas tree. The day was warming up quite a bit now. Abby and Mr. Toes were really hot, their vest acting like heat collectors.
Every ratty friend in the control center was dumbfounded. Why would Cardinals attack the hawk in this time of year? The cardinals were not nesting anymore, the hawk didn’t really present any danger to them. Were they on a practice flight and this was an opportunity to pick on someone bigger? It didn’t matter now. They broke up the dive just in time and the hawk had barely time and energy to level off and climb away from them.
I had no idea what happened. I sensed that I had to follow Abby, that the situation was grave. Something inside of me took over and turned my mind blank. It drove my legs. My paws worked the hardest they ever did. I was really hot and getting hotter. We dove under the fir, plowing into the old needles and all sorts of decomposing matter.
When we picked ourselves up, we turned around and huddled with Suzy and Molly; and we watched the brawl in the sky. The hawk was trying to save her own hide instead of tearing up mine.

- Thank you Renee!
Follow Suzy, Molly, Abby, Mr. Toes and Zeus on FB
Posted by Mister Bun at 3:00 AM

yes ,you chinn it its yours,xx Rachel

My apologies, all I could think of was Cardinals (you know, the guys that surround the Pope). I was trying to figure out how they could be airborne and attacking the hawk until I realized they were real, bonafied birds. How embarrassing.
-Jen (Kohl's mom)