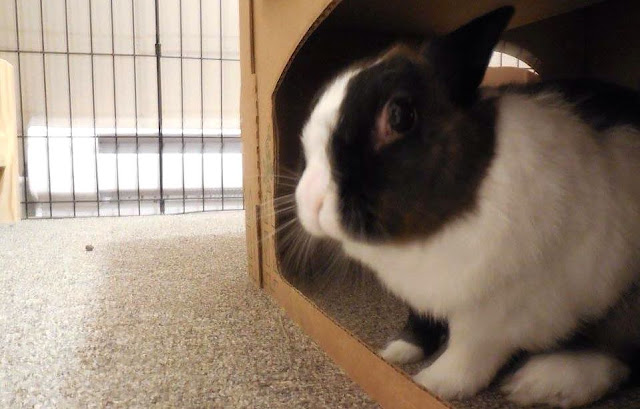 Frankie  started grinning. “Oh, come on, Frankie, are you telling me that this tracker is so great, but the only way you know I’m in trouble is when 2 signals are too far apart, distance wise?,” I sneered, “... no biometric data gets transmitted?” Frankie stopped grinning and put up his paws in front of him, as if pushing away the idea that his joke backfired. “Ok, ok, the reason for 2 of them is redundancy. Yes, we’ll know your heart rate, temperature, etc.”

I nodded my head, Abby asked “... so those green circles on the computer screen we saw moving were signals from the trackers and the whole thing works a little bit like a radar, right?”


“Exactly,” said Frankie. It will also show us if there are any birds of prey or earth bound predators around. If you get swallowed by a land marauding, rubber boot wearing megalodon, we’ll know how tasty you were and how satisfactory the megalodon’s burp was!,” exclaimed Frankie, his grin returning. "Ok, just kidding."


If looks could nibble Frankie would be short a whisker. No matter how right he was,  I found it most difficult to appreciate his sense of humour. “I know you’re looking out for us and want us to come back for dinner, Frankie. Just don’t quit your day job, your stand up routine still needs some work,” I said as my eyebrow went up. 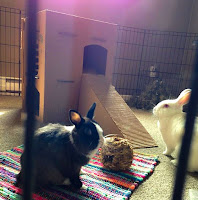 Next morning we suited up as soon as hoomins left for the tar pits. Sun rose a little bit after 6 so we had plenty of daylight to work with. We turned on all our gadgets and performed all checks. “Frankie? … radio check!” started Suzy and the rest of us followed. “Loud and clear guys, you’re all lit up on the tracker like emeralds!” answered Zeus. We grinned. I grabbed some treats and water for the road, just in case.


By now we were quite comfortable dealing with the stairs. Our hops were light and effortless, not having to worry about any cargo helped and we were downstairs in no time. The only thing left to do now was to build a ramp so we could climb up on the table next to the south facing windows. A chair and one of our packs that we stashed away on the last trip did just fine. We got out a small rope ladder. If all went well, we would need it to get up to the house after the EBA (Extra Bunnicular Activity). Sliding out should be easy, trying to hop back in through a small window is not something we want to risk. So we’ll climb back up on a small ladder.

Slowly, we got ourselves and the ladder to the table. “Zeus, how are things looking?,” I asked, our noses pressed against the double paned window. We were looking at the garden. Weather forecast called for cloudy skies and pretty cool temperatures, possibly rain later on, but we didn’t care. “So far so good, I see your heart rates elevating, you’re not hyperventilating, are you?” asked Zeus. “No, no such thing, Zeus, we’re doing well,” I replied.

Out of nowhere we noticed Bruno going by in the garden, next to the blueberry bushes, moving very slowly and looking around. When he got to the end of the berry row, he sat facing away from us, swaying his tail from side to side, like a fluid metronome.


After another minute Bruno came on: “Zeus, confirm alarm system turned off, all clear in the air”. ”Alarm is off and sky is clear, ground is clear, we’re ready when you are” confirmed Zeus.
“We’ll try the first window latch now!” said Molly. Abby got both of her paws on the latch and tried to turn it. No joy. She tried again. It would not budge. Oh, come on! Not now! Not after all we’ve been through!

“Let’s try the next one; Mr. Toes, take over for Abby; Abby, please try the next one,” directed Suzy. So I tried to work the latch back and forth, the best I could. The only change I could feel was in my paws, they were getting pretty sore and …. I heard a  loud click and then Abby screaming “We got it!!!!” I could feel my face flush and turn hot, my ears burning up. 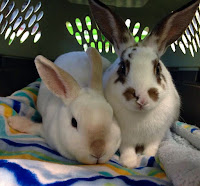 “Let’s press against the window frame!” exclaimed Suz and we put our paws on it and waited for Suzy’s count. 1, 2, 3 and puuuuush! It gave way immediately, had we pushed any harder we would have spilled outside!


The cold air rushed in, washing over us like a river.

Aaannnd...they're out! I just knew they'd figure it out; EBA is becoming quite frequent all over the world these days. A lagomorph take-over is imminent! Are you stocked up on bunny treats for the necessary SUTTRs? Surrender the fresh produce trucks!
-Jen (Kohl's mom)

If they get loose - yup - disaster. (I thought bunnies just slept all day.)

This is worrisome stuff.