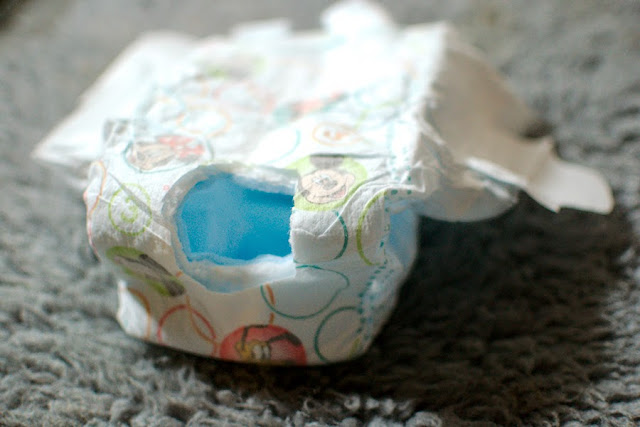 As hoomin promised, hoomin dragged me out to the vet this week. My teeth are ok, doc said 'a little pointy, but ok'. Hm.... At least for the moment I don't have to go under to have them corrected. I got a nice baf. Baf was nice, I was not nice about it though.

Doc says 'urin scolds'. Not good. Hoomin always thought that would be a problem. We've noticed the gray pads I love sitting on, do not wick off the moisture as well as we'd hoped. A little bit of urin beads up on the fibers and stays there. A lot of pee does soak through to the undelying liner and we see that when the liners get changed. The problem is the little amount of urin that does not work its way down right away.

Those are the long term maintenance problems. We've been at it close to 1/2 a year now. So we decided to give something else a try. Mrs. Tichy picked up a pack of small Huggies diapers and I've been getting wrapped in them for the night.

Idea is to keep my good leg and front paws free of urin, at least for part of the day.
If you think I hate taking a baf, I really let them know how I feel about the diaper.
It takes 2 hoomins to wrap me in it. One of them is walking around with some decent scratches on his forearms. Oh well, he likes it. You know, marks of honor, earned in the line of service to the bun overlords.

Question to the community: does anyone have any suggestions as to better way of dealing with urin scolds?

try putting Calendula nappy rash cream as a barrier cream and to help sooth too,the only thing I can think of that wicks moisture away is Nappy liners,xx Rachel

Oh dear, oh dear. Keep trying and helping and hoping! We have used some baby powder after a wash to help dry and sooth. Not sure if it helped but it was something to try.

Wool has fabulous moisture wicking properties; perhaps wool rugs or wool blankets on top of the underlying liner? Of course it will mean washing them, but it might be easier for both hoomins and Bun :D Mr. Bun, I won't ask you not to be upset (because that looks mighty uncomfortable), but please go easy on your hoomins; they are really quite innovative and doing the very best for you!
-Jen (Kohl's mom)

We'll be trying the cream. We looked up the pads, but they are very small compared to what we hoped for.

Will try the powder as well :-)

... any suggestions in regard to specific brand or maker? Washing is no big deal, we wash the gray pads right now on a very frequent rotation anyway.

Apologies, not really an expert in this area, but perhaps something like this: http://www.faribaultmill.com/baby-blanket-1920-buffalo-gray.html ?
Amazon, Overstock, Wayfair and the like also have lots of woven wool rugs and throws that might work.
Hope you find a solution soon! :)
-Jen (Kohl's mom)

Thank you :-) That's what I thought, I found some 100% wool blankets on Amzn. last night and one is on its way. Time will tell.

Doggie diapers come pre-formed so they would save you work. I hope you find a diaper alternative, though.

Already tried to post this once, let's try this again! I used to use synthetic sheepskin for my bunnies. Six out of eight house rabbits developed an arthritic condition where they lost the use of their back legs. Heart breaking. We would put a pee pad underneath the sheepskin and I would recommend changing both out daily. The sheepskin is machine washable and not too expensive. You can find it on amazon. Here is a link: http://www.amazon.com/Essential-Medical-Supply-Sheepette-Synthetic/dp/B001CBG14U/ref=sr_1_3?s=hpc&ie=UTF8&qid=1432076880&sr=1-3&keywords=synthetic+sheepskin
Hope this helps. Many blessings to Mr. Bun!

Much appreciated, the clickable link: http://www.amazon.com/Essential-Medical-Supply-Sheepette-Synthetic/dp/B001CBG14U/ref=sr_1_3?s=hpc&ie=UTF8&qid=1432076880&sr=1-3&keywords=synthetic+sheepskin

We've been using something similar, I think they work in similar ways and Mr. Bun loves it. We also have the peepad underneath: http://www.amazon.com/gp/product/B000UGJNW0/ref=oh_aui_detailpage_o03_s00?ie=UTF8&psc=1