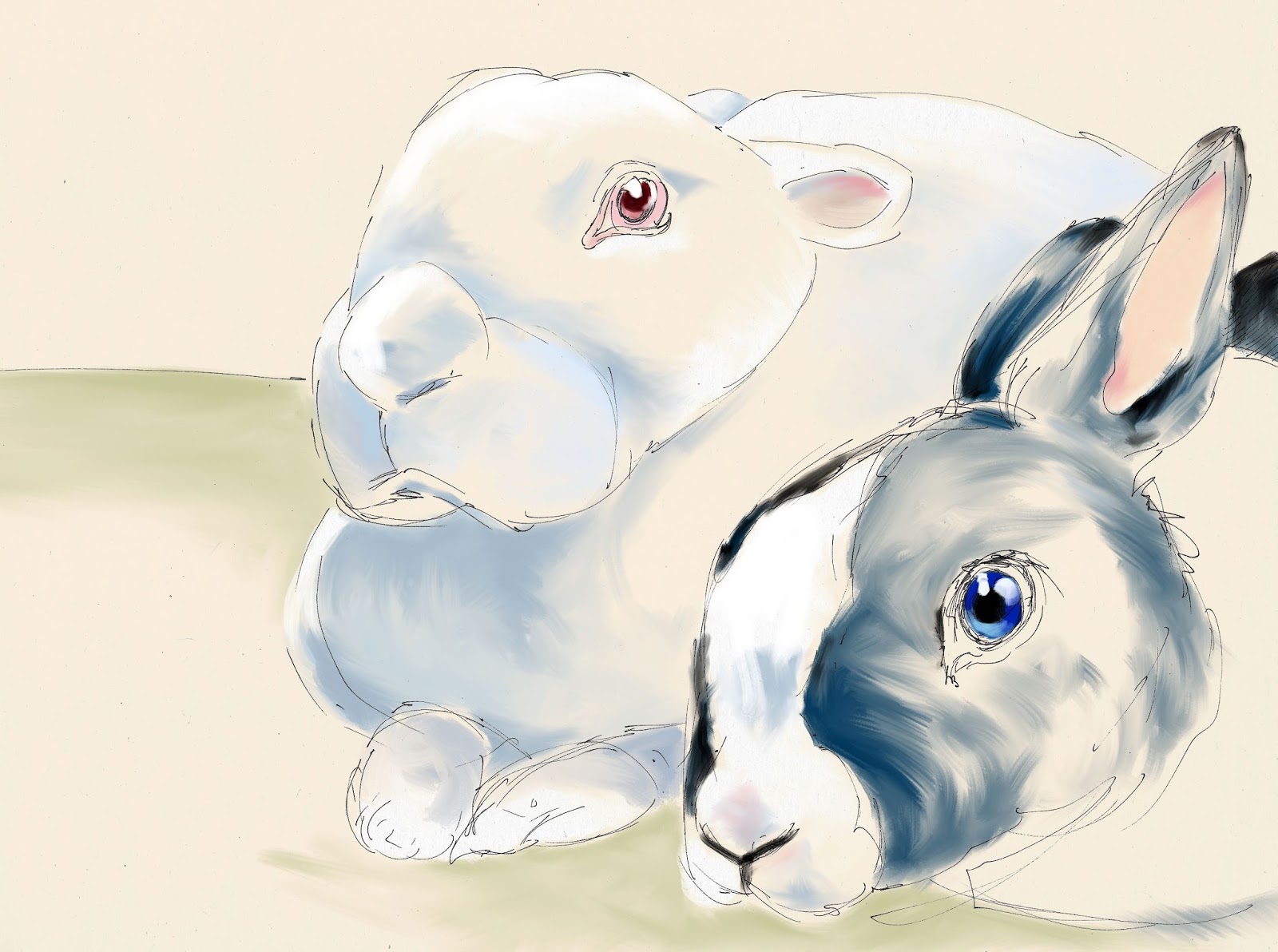 Author's Note: During the last episode, Mr. Toes and his crew launched their craft into orbit in a daring attempt to return to when they came from.
My hearing returned first. The ear is a simpler, more mechanical organ than the eye, so we register sound faster than sight. Not that it made much difference in my case. At first, I couldn't understand anything I was hearing. I heard a lot of ringing and humming in the background, and that noise was very slow to go away. Somebun was speaking, "Jahoppy One, Jahoppy One, do you read?" By the time I made sense of it, somebun else spoke up in a rough, tired voice, "Loud and clear, Jahoppy One." Joey? Was it Joey? "Jahoppy One, state your emergency; souls on board?" that other voice asked. "Six on board; four unresponsive, still assessing; stand by, Jahoppy One." Penny? Was that our little Penny? "Rog," said the other voice; that had to be the Center.
"Toes here. I think I'm OK," I forced my dry mouf to mumble into the intercom. "Pancake, are you OK?" I was pretty sure that was Penny again. I heard the clanky sounds of some helmets making contact. Penny had to be out of her couch and checking on everybun.
"Yeah, I'm fine, I can't see yet," responded Pancake. Abby, Molly, and Ava checked in shortly after. 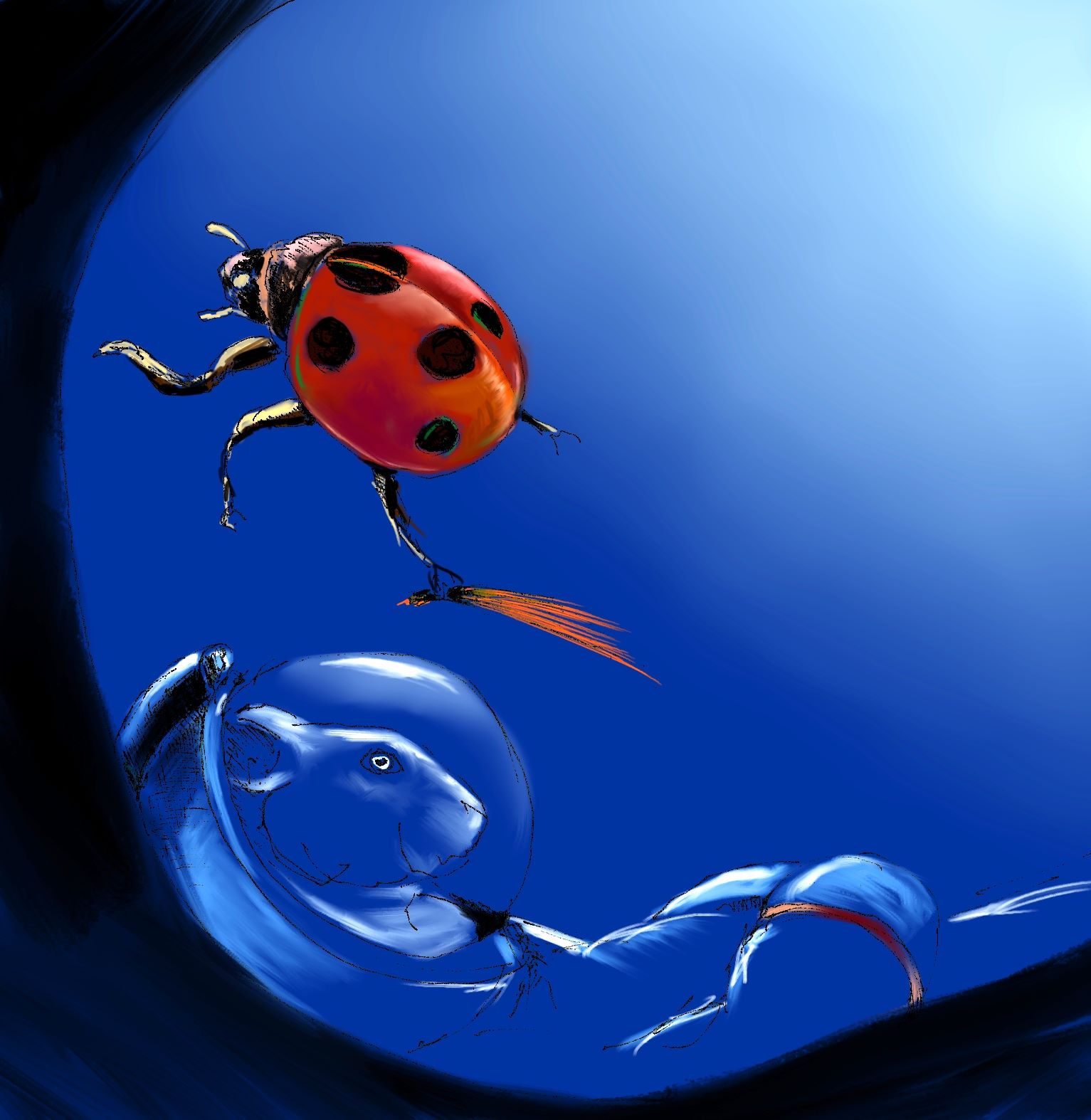 Hopmeric's hair, Joey in the background
I started noticing some colors. They were blurry and pale at first. I wanted to rub my eyes with my paws, but I couldn't. I still had my helmet on and those thick gloves. Of course, it could have been worse. My nose could have been inching. I blinked a lot and hoped that would clear my eyes. There was a lot of grunting and cussing on the intercom as Penny made her rounds and we tried to come to grips with being alive.
Finally, I understood one of the reasons why all the colors I saw were fuzzy and diluted. The visor was fogged up. That meant the life support system in my suit went out for a while, but for how long? I noticed that the CO level was decreasing now. It was below the red zone and dropping. How long did it stay in the red? As the air in my helmet dried up, my visor display started tracking my eyes and responding to commands. I wanted to check the ship's life support system. The pressure was within limits on the low end of the scale; it was slowly rising to the proper level.
"Abby? Abby!" I called out, "... do you think we've got enough pressure to take off the suits?"
"I don't know, I still see fuzzy," came back Abby. "I think we're OK," offered Pancake. Then, Molly added, "Stay put for now. It looks like we had lost pressure at some point, that's why it's building back up. This poor thing is trying to heal itself. And we still have to run a full propulsion test." 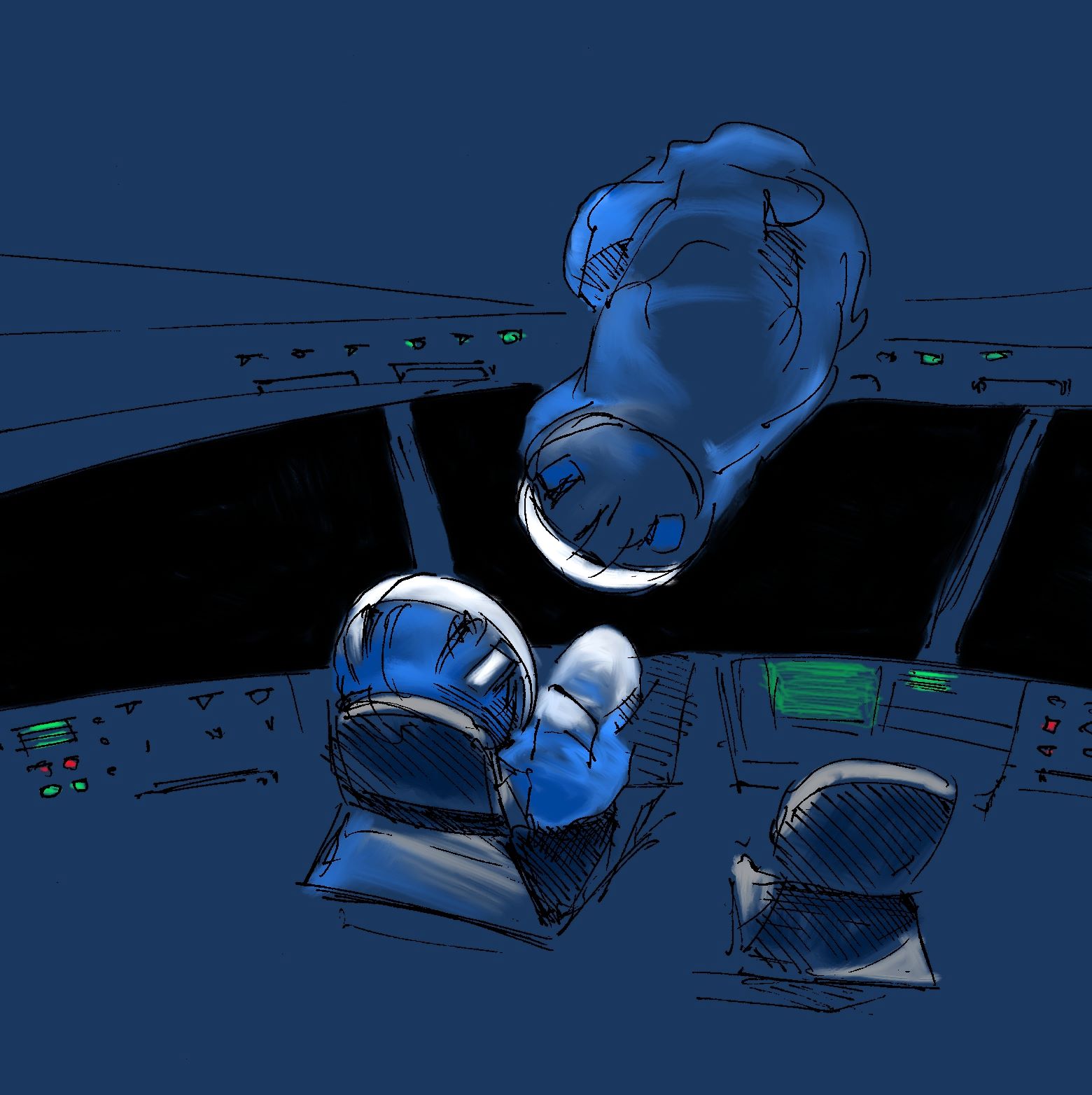 Penny checking up on everybunny
Since Joey was the most coherent of us, he talked to the Center and kept them updated on our situation. We could pick whatever space-route we wanted to whatever hub would suit us the best. Space was ours.
Now my stomach was letting me know how unhappy it felt. I was mad about not being able to throw up. Then I was glad that I couldn't because I would probably drown in my own puke, right in my helmet. So I relaxed as much as I could and watched the different diagnostic checks my visor was displaying. Everything was coming back in green.
As I ran the tests, it occurred to me that surviving our experiment presented quite the dilemma. A while back, I had heard about a horror story somebun wrote. A lagomorph was to be killed on the order of a warren council, but before the killing, he or she was allowed to have a last, fancy meal, no matter how extravagant, courtesy of the council. I don't know what the motivation was behind that scene, why the warren decided to off somebun, or why they would offer that dinner. I remember being very upset by the whole production as if it was a real thing. Was the warren trying to hedge their bets somehow, to appease the condemned bun, take the edge off their guilt or something? I could never make it all add up. Anyway, now it hit me that we had flipped that story. According to some calculations, we shouldn't be here. Did the transformation we just underwent count as death and rebirth? Since we were coming back to life, what should we have for our FIRST meal? What about the first beverage? The very first time around, when we were tiny, the first meal was very simple. Usually, it was mom's milk or else. But now we had a chance for a do-over. We squandered the first opportunity for it after our picnic trip went sideways. Today we could do it right. 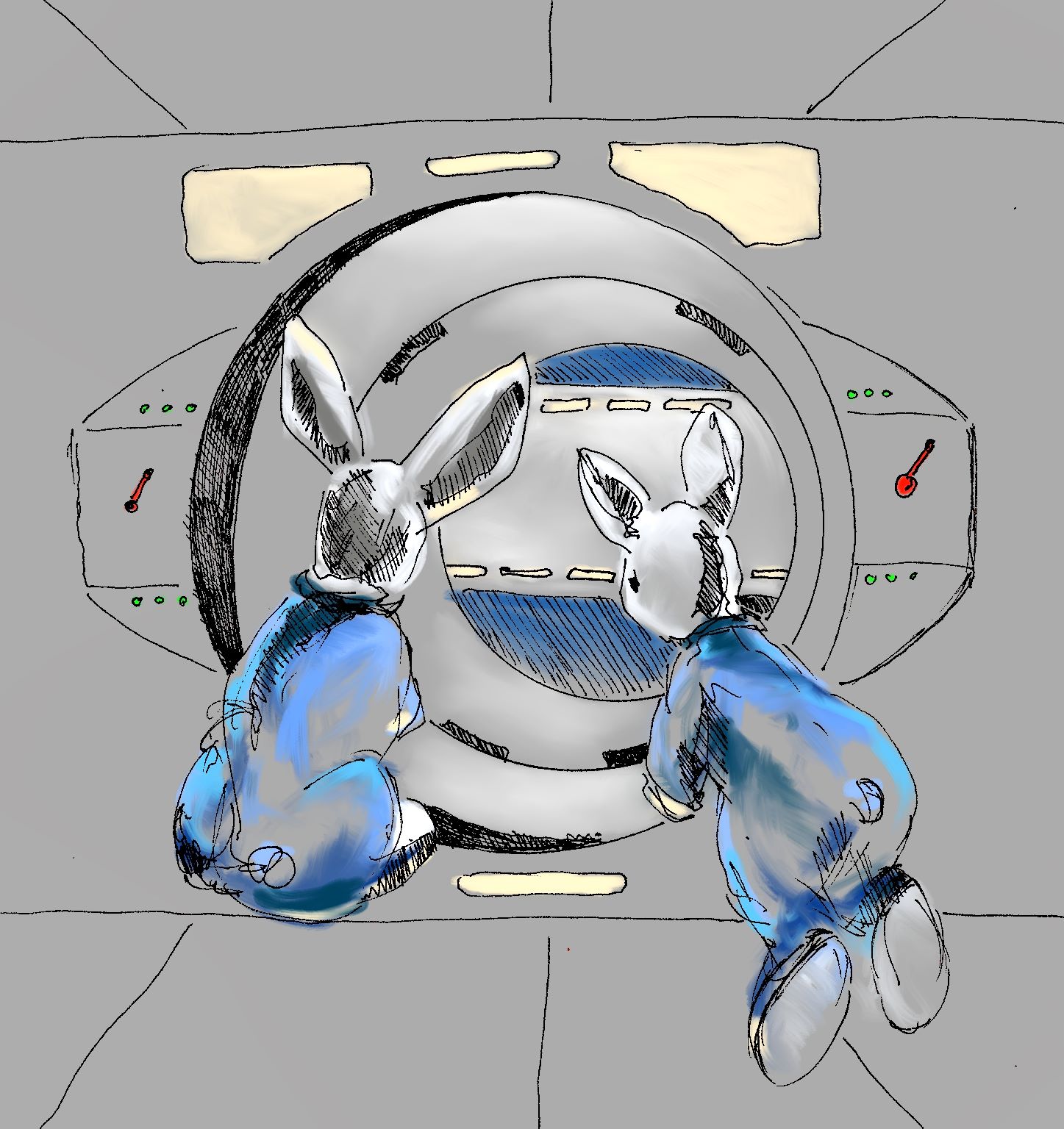 Looing out into the hub
Something started to float right in front of my left eye and interrupted my train of thought. I got spooked a little, but it turned out to be just a ladybug. She was inside my helmet. Probably got lost and got stuck there during our evening dinner alfresco. She ... was it a she? She had a little clump of bright, orange hair stuck to one of her legs. She was very still, and I thought she didn't make it. But when she hit the inside of my bubble, she came to life and gripped the slick, glassy surface of the visor with her legs and marched out of sight. She took the orange hair with her. Maybe she was that tiny bit of good luck we needed to sway fate our way?
"Major? Are you still with us?" I heard Abby just in time to stop my mind from wandering away again.
"I'm here."
"Good, we are deciding who's going to test what parts of the propulsion and control systems. What do you want?" Abby asked.
I picked the reaction-control. Again, to our surprise, nothing blew up. We used the tests to set our course for the nearest hub. Our old tub headed for the repair station under its own power! At last, we could take off the helmets, and it felt great. Everybunny got to throw off the gloves and rub their eyes. It didn't help much. 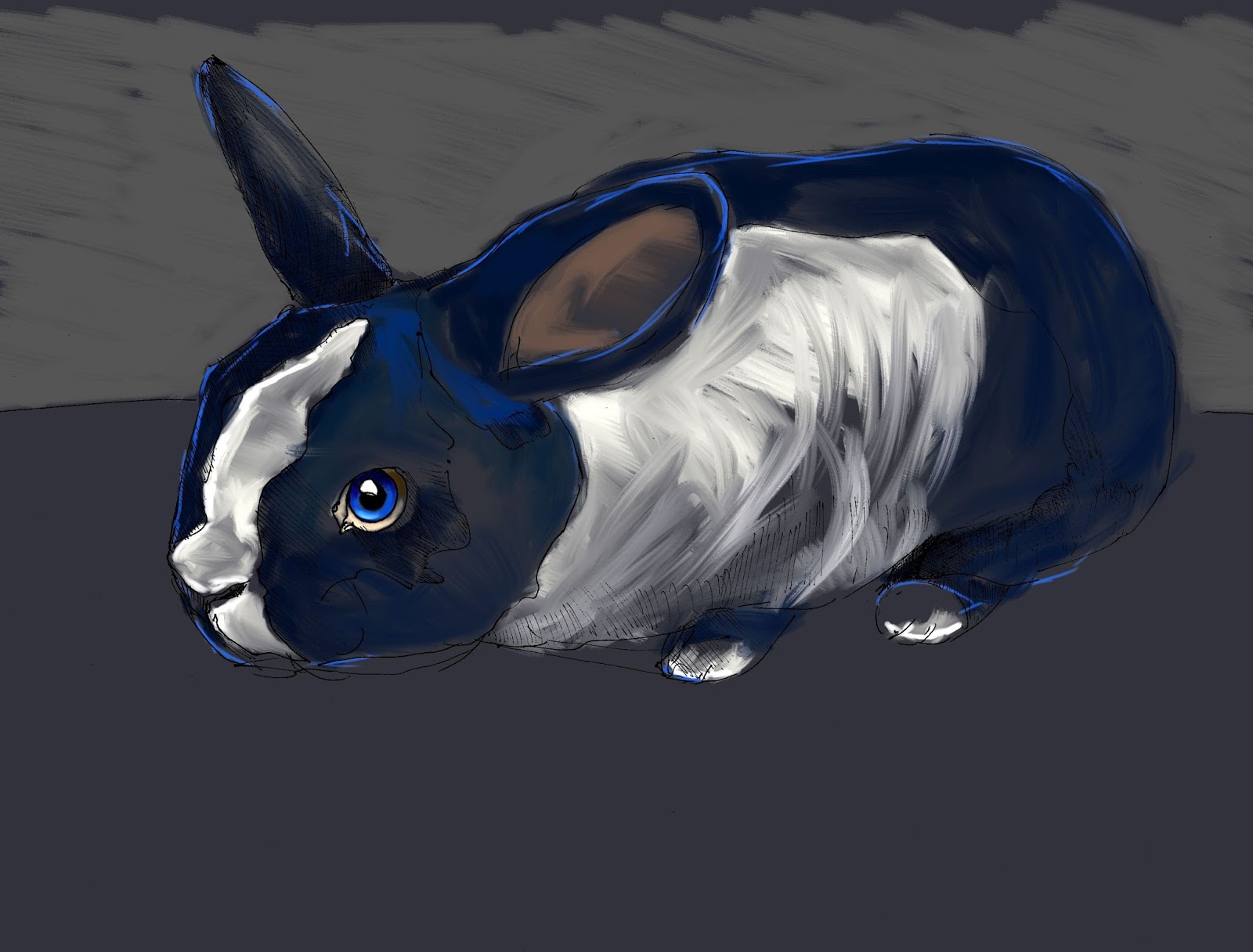 Mr. Toes
Docking with the hub was the last major hurdle we had to face. If our airlock couldn't get a good, clean seal, we would have to do an EBA to enter the hub. Usually, that's not a big deal, but this time it felt insurmountable. So we waited, half suited up, wishing the time away.
When the moment of truth arrived, our ship docked, the airlock pressurized and we could barely wait for the hatch to open. We discarded the rest of the suits with pleasure. Molly was so excited that she started thumping. It looked comical at first. Her feet were windmilling as she floated in front of the hatch. Then, I realized how unfunny it was. We were on the brink of complete exhaustion and helplessness. We have had enough, yet we had to open the heavy hatch ourselves. I thought it was strange that no bun on the other side tried to help us. We expected at least the rescue personnel to be waiting for us. There was no bun.
Credits:
- Renee: taking care of critters, photography
- Mr. Bun, Ijon Thichy The Nth: story, illustration
- Mrs. Angie: editing

Follow the Characters of X Plus Bun on FB
On Instagram @dollyalittledisabledrabbit
Visit our About X Plus Bun page to learn more about the cast members and catch up on other stories!
Posted by Mister Bun at 5:53 PM