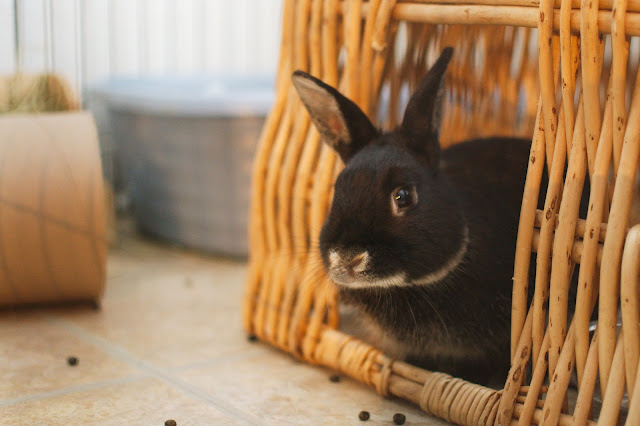 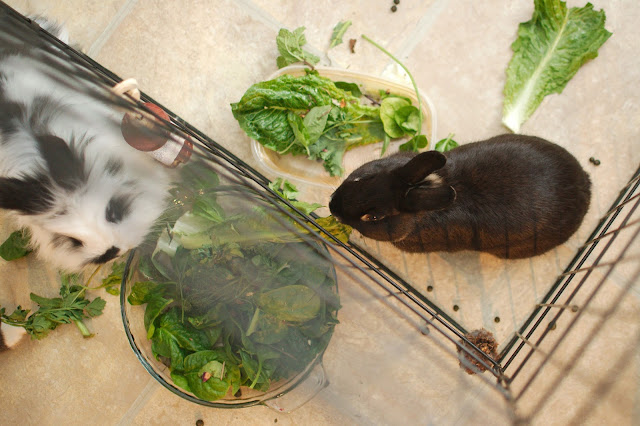 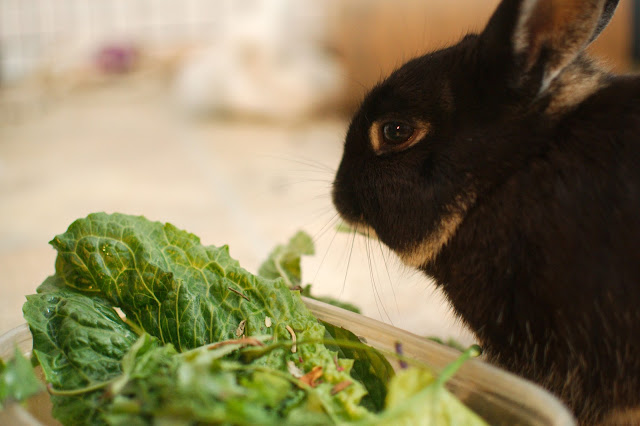 
Our neighbor knocked on our door first thing M*nd*y morning. "There's a bunny in the yard!" she declared frantically. Our hoomins trotted out to see what's going and sure enough, there was a little feller just sitting in the neighbor's yard, tucks out and all. They could tell that this was a domesticated bun and not a wilding. The dogs were barking, a few cats were wondering about, but this guy just sat there.

Well, hoomins thought someone set him, or her "free," or the poor thing run away. They tried to catch the bun, and it finally became distracted with fresh carrot tops. No bun can say no to fresh carrot tops! They had to be better than the Spanish Needle and other weeds that were on the breakfast menu in the yard. While the refugee nomed the tops, Angie caught him from behind.

Hoomins put up a pen in the living room and set the usual amenities: hay, pee bin, water, some pellets.

Tuesday morning the FNB, that's a "Fantastic New Bun" for you, went to the V.E.T. for a checkup. That's when we found out the FNB was a boy, about two years old, fully grown with all his original factory equipment intact. All his test came back negative.

We updated his records, and now he's Gus. Yes, Fleetie, like THAT Gus. Our little Gus is so tiny that the hoomins thought he was a few months old Easter gift set loose. Well, this tiny Gus would make the perfect Mercury bunstronaut. And we caught him during his EBA! He was so detached ;-) He's so feisty and spunky!

Gus has an appointment on Friday to decommission his unneeded equipment.

At the moment, every bunny is very territorial. Gus has no litter bin habits at all. He likes to spray his territory, and we respond in kind. Our hoomins have a heck of a time trying to keep up with Gus to keep the place not too smelly. We hope that Gus can mellow out as the time goes by. Can a grown bun develop a better litter bin habit?

- Espresso and Charlie
Posted by Mister Bun at 9:28 AM

Aaaawwww! Bunnies must have a sort of radar that guides them to bun-friendly homes. Decommissioning the unneeded equipment has been known to help improve litter box habits :D Congratulations on the new addition to the warren! :)=
-Jen (Kohl's mom)

Gus did indeed fall into the finest of situations! Hi Gus - welcome to the group of disapprovers par excellance!