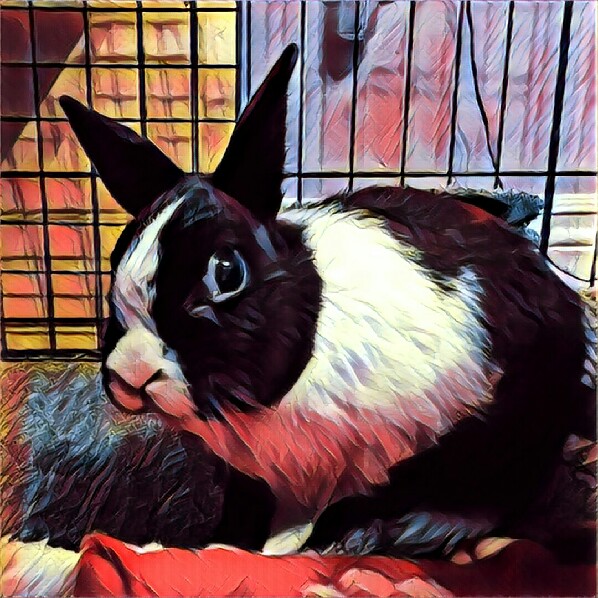 Author's Note: Mr. Toes and his crew are having a close look at the outside of the Behemoth and what they suspect might be its propulsion system. They are worried about not having a remote probe they could deploy to explore the mystery ship remotely.
I wondered, "If this dock is empty, where is the craft that belongs here?"
"Major, do you see that opening, straight ahead? Could that be an airlock? But why is it open?" asked Hopper.
"What makes you think that this is an airlock?" interjected Mel.
"Try to get a little closer to it. But make sure we can back out of here, Hopper. I don't want to have to get out; just push us out," I said with a giggle. 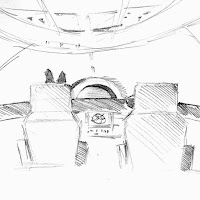 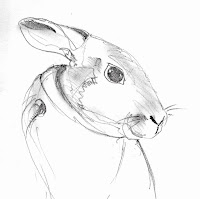 Hopper
As we inched closer, we noticed several other openings that were sealed. They were all arranged in a single straight line, and only the last one was opened. I couldn't even tell you what let me assume this thing would not only be a hand airlock but that it would be recognizable to us as such. When we got close enough to the opening to peer through it, Hopper rotated us in such a way that the nose of our tug was pointing into the "airlock," and our flood light shone directly into it. That was like no airlock that we'd ever seen before. It was irregularly shaped; its rim was thick and looked swollen. The whole thing looked more like an orifice of some kind than an airlock. Of course, it might have lead to the bowels of the Behemoth, but how could we know for sure?
"Hopper, take us out of here. Let's get a look at the rear of this beast. We can come back here later." I requested. Very slowly, we started moving away from the opening. Hopper turned us around and we made a beeline toward the "back" of the Behemoth. When we cleared the read edge of it, we swung around again and came face to face with the ship's behind.
"I just want to see how this thing gets propelled," I said. Mel turned around and smiled at me. "Thinking about hot-wiring it, are we, Major?" I smiled back.
Before us, lay the most peculiar sight. The back end had a very thick and wide rim around a deep, hollow space, going deep into the craft. It looked like the insides of a bell.
"Major, if this is anything like a combustion chamber, it is the biggest one I've ever seen!" exclaimed Hopper. Indeed, we had the sun behind our backs this time, and the deep chamber was well illuminated.
"We have got to get in there." said Mel.
"Hopper, what do you think?" I asked.
"Agreed, Major. If they light it up, though..." Hopper's voice trailed off quietly.
"It will be quick." followed up Mel immediately.
"OK, let's have a look before the sun sets again. There's no way we can ever illuminate any of this with our lights." I said. Hopper immediately moved us forward. We headed for the wall of the chamber. I wanted to see its surface up close. It was smooth with no discernible texture. If anything ever combusted here, I couldn't tell that from its clean appearance. In zero-gravity conditions, when you throw something one way, you move in the opposite direction, so if this chamber is a part of the propulsion system, then the laws of physics as we know still apply to whoever build this spacecraft; we have that much in common. 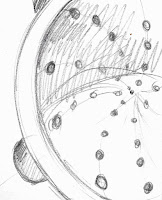 Combustion Chamber
We came to face another curiosity. From a distance, the chamber looked covered by dots arranged in a spiral pattern like the seeds of a sunflower, though not as dense. One of those dots turned out to be anything but a dot. It was an opening with its round edge smoothly blending into the chamber. Hopper instinctively picked up the heading that led us along a line of those openings toward the peak of the chamber.
"Maybe those are some kind of veins?" wondered Mel. If we only had a probe to send down one of those veins. Maybe one of us could venture out and follow one? I perished the thought. At the very tip of the "bell" was another vein outlet, no bigger or smaller.
It was getting dark all of a sudden. We had lost track of time, and the sunset was upon us. The shadow cast by the chamber swallowed us quickly.
"Dare we sit here for an hour and a half?" asked Mel.
"Hopper, can you back us out of here, or do you need light?" I asked. He should be able to back out, but he had the controls, and there was no sense in rushing him. A thought crossed my mind. What if our ship comes into contact with the Behemoth and we get cold-welded to it? What an awful, sticky way to go that would be. Hopper estimated a course correction and pointed our duff toward the middle of the chamber's outlet. We could see the starry night behind us, and we aimed for the middle of it. 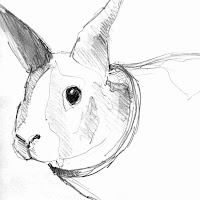 Mr. Toes
We were out of the chamber momentarily, and we could make out the dark shape of the Behemoth against the stars. We found our way toward the empty dock where a craft or a pod was missing. I wanted to have a second look at it. We've gone another sunrise and sunset cycle looking at the empty berth.
We had a big meal, as we nomed and debated the chance to explore that empty airlock. Whatever we decide to do, we will do it together; no bun will stay behind. We kept scratching our heads over some way to construct a probe to send into the "airlock." We just didn't see how we could cannibalize anything from our vessel. It would only be able to transmit a signal in a clear line-of-sight. We suspected there would be no clear lines to transmit along or to follow inside the Behemoth. Our theoretical "day" was drawing to a close. Some decent napping would do us a great deal of good before we invite ourselves into the Behemoth.
Credits:
- Renee: taking care of critters, photography
- Mr. Bun, Ijon Thichy The Nth: story
- Mrs. Angie: editing

Follow the Character of X Plus Bun on FB
On Instagram @dollyalittledisabledrabbit
Visit our About X Plus Bun page to learn more about the cast members and catch up on other stories!
Posted by Mister Bun at 7:26 AM