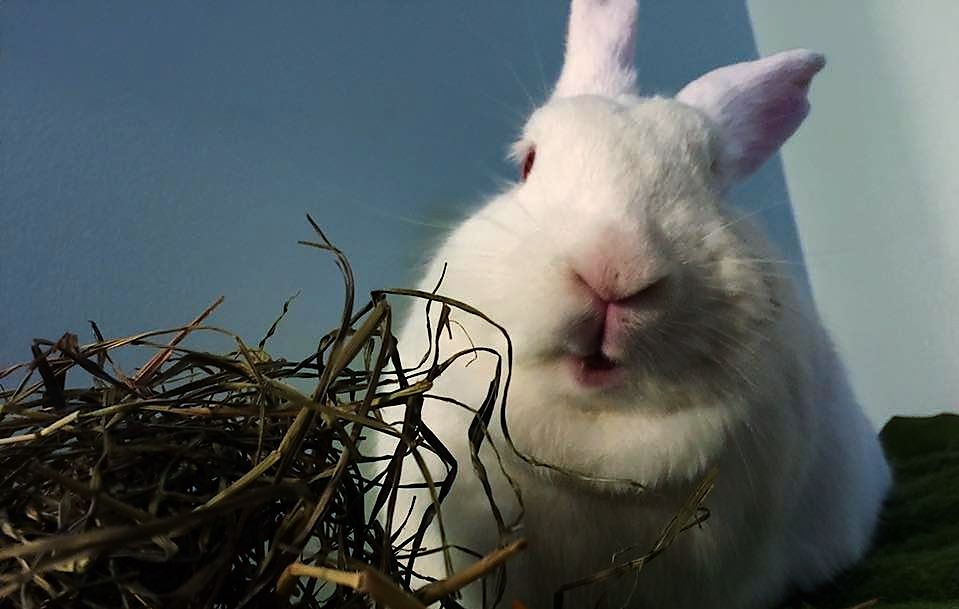 Author's Note: (narrated by Joey) Greetings, Everybun!
Today we have for you a progress report on "The Disapprovers." We are working hard on rewriting the early posts in the series. In this episode, Mr. Toes talks about the new routine in his life - living with his adopted hoomins and making new friends. He meets Cleo, Suzy, and Bruno.
To illustrate the episode, we found some old images of our characters and run them through a program called Prisma.
Next week we will return to the "X Plus Bun" saga and will see how Mr. Toes and his your crew are handling their challenge of being displaced on the time-space continuum.
- Joey
The door the carrier opened, and I hopped out. I was immediately picked up and put in my quarters. I knew this would happen and at least it was over. I've been with the new hoomins for few days, and they took me to the V.E.T. But that's OK; it puts their minds at ease; they're terrible when they worry. Now I will stretch on my pad, drink snack and get spoiled with snorgles and nose bonks. Later on, I will hand out with Cleo and Suzy, two very lovely buns ladies. I think Cleo takes a real shine to me; she likes to hang out a lot. She's funny, too. Just the other day she asked if I know where the get some industrial strength wire cutters. I played dumb. My gut didn't like where that conversation tried to go. I quickly moved the conversation to pros and cons of homemade versus commercial treats. 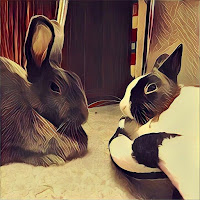 Cleo & Mr. Toes
It turns out any conversation can be treacherous. I'm a big proponent of homemade treats. You see, you can use all sorts of fresh ingredients in them, and you always know what you are getting. Then we talked about raw versus baked treat, and clearly, there was no winner in that debate. We talked about wild strawberries, you know, the kind you can find in the woods, versus ones grown hydroponically. I told her the taste changes significantly, once you start altering the berries and breeding them for "durability" and longer shelf life. You simply lose the taste. On top of that, in the greenhouse, you don't have the smell of woods around you. The farm will never feel as fresh and relaxing as the woods and everything that makes it up. The damp underbrush and leaves on the ground, the mushrooms in the fall, the tree bark, the pine needles, the ferns two times your length. "Yes, but there are no wolves or foxes or bears on the farm or in the greenhouse, are there?" asked Cleo. Well, she had a point. The smell of a wolf can take the joy of fresh berries right out of you.
She looked at me funny, though. I had the feeling it was one of those "You're not from around here, are you?" looks. 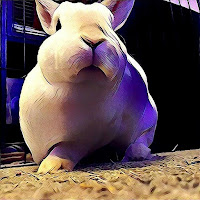 Suzy
Suzy never said much She mostly watched our banter shook her head from time to time. Suzy had splayed front paws, but that never seemed to stop her. I had the impression there was much more to her than met my eyes. She had a better poker mouf than I did.
Whenever our conversations strayed into overly adventurous territories, I tried to shift our attention to the fresh hay and alfalfa waiting for us. Well, we got alfalfa as a treat and only from time to time, but we nomed it with gusto, always, and it was a safe subject. 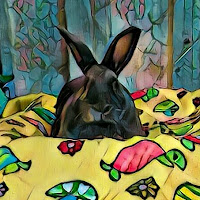 Cleo
Then, one day Cleo asked me if I knew that our hoomins had a garden? I had no idea. Yes, it turns out, they do and in spring they plant a bunch of veggies for us, and the feasts are incredible. They also have trees growing in the back yard. She asked me if I ever had a nap under a tree in the summer.
I will never know what gave me away, but she only nodded her head and said, "That's a shame you've never done that, I hear it's quite lovely." My gut told me, "She almost has your number and is getting closer to the root of it." I pushed the thought aside. 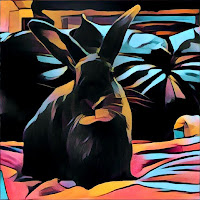 Cleo
I also made friends with Bruno. A pleasant, burly gent of a cat. He keeps bragging about how often he sneaks out of the house, and the hoomins are yet to wise up to his exploits. He said if you play them right, they'll never know what you're up to.
I was starting to see where Cleo got her curiosity. She and Suzy were rescues; they were indoor bunnehs all their lives, and for better or for worse, were spending their day in the care of our hoomins. I would say it's for the better. Then, this Bruno cat comes around keeps bragging about the outside. To be honest, he sounds like he's making up half the stuff, but they don't know it. Once their ideas germinate, good luck trying to get rid of them.
Credits:
- Renee: taking care of critters, photography
- Mr. Bun, Ijon Thichy The Nth: story
- Mrs. Angie: editing

Email ThisBlogThis!Share to TwitterShare to FacebookShare to Pinterest
Labels: Bun Fiction, The Disapprovers

Fun to go back!

Oh, that wee bun mouf is almost enough to make me forget about the latest depressing news story or my leaking washer or...see, I forgot! The magic of rabbitude.