The Disapprovers - The Bun Stuff, Pt. 4

Last Week on the Disapprovers: The Disapprovers discovered a technical error in their plot line and proceeded to correct it. It turns out that no bun can watch a sunset over the west coast of Africa at 2:30 AM Eastern Standard time. Afterward, the pick up the story line where they left off and move on.
We didn't have to do anything to watch the next show when the night took over, and all the stars came out. But we decided to alter our vantage point anyway by gently turning around using the handlebars and cables for support. We barely had to touch any of that stuff since our mass was so small; it took very little force to move us. The view turned out much more satisfying and overwhelming than I expected. It meant that I was relaxed enough to perceive the majestic void in front of me. Suddenly I had a hard time breathing; I felt a hard squeeze around my chest. I thought, well, I can't recognize any of the constellations because my vision is failing, I can't breathe, is it my time already? No, it wasn't. It was Abby, squeezing me and holding on. I couldn't recognize the constellations because there were so many stars! I tapped her paw, and she let up a little. We didn't have to say anything. I felt a strange bond with the hoomins here, though. I suspected they had to be frustrated trying to describe their experiences of spending time here. No matter what they tried, the experience evaded capture and stayed beyond their reach. We let ourselves be, and I lost all track of time. We got used to the hum of the station, and the ensuing monotony felt reassuring, conducive to being lost in the moment. 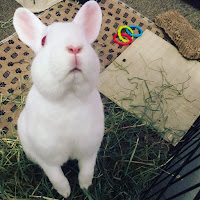 Abby
I felt Abby stir a little and scratch her cheek. "How many atoms of gold are in our bodies, do you think?" I asked quietly. She looked at me puzzled, shook her head and rested it on mine. I looked at the view outside again. "Does it matter?" she asked after a long pause. I said, "In this grand scheme of things," and I pointed to the stars with my nose, "probably not. But each and every one of them came from the supernovae, out there." I kept quiet after that. I felt bad about breaking the silence; I had diminished the majesty of the moment. 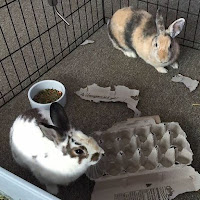 Molly & Pancake
After a while, we changed our positions again and got ready to watch a sunrise. Technically speaking, the sunrise looked the way hoomins described it, beautiful and overwhelming, yet none of that prepared us for the intensity and speed of becoming immersed in its pure sunlight. My brain felt like a piece of clay, getting kneaded and worked on by some fantastic, invisible paws. I could feel in my chest the gut and paws the impact of what I was observing. My grand plans, mischief, and all that I had hoped to perpetrate on this trip vanished. I was grateful that I had the luxury to be honest with myself and to admit that simply being here was enough. I was thankful that Abby was here, that I didn't have to choose between her and being a bunstronaut. 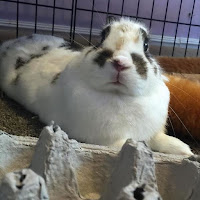 Molly
She tagged on my foot. "Major, if we want to see anything else on the station, we probably have to do it now. We still have the 'gift' to deploy, remember? We can come back here later, okay?" I nodded and turned around to float out and away from the cupola. I didn't want to leave it. I pushed off the window with my foot, just enough to get moving. "I'm really tired of lugging around that 'present.' It bounces about every time I move, and it's going to cause a problem," grumbled Abby under her nose. Several sections connected in a straight line make up the core of the station, and there are several smaller modules connected to its sides. It's a gross oversimplification, and I would never call the station a glorified space trailer, but it will do for now. We got out of the Node 3 we were in and tried to turn "left," toward Node 2, and the crew quarters. Well, the "left" part is relative. You can have "left" or "right." All you have to do is turn yourself upside down, and "left" becomes "right." Anyway, we had to go "that way." You know, everything here is "down the hallway and to the left." You just have to put your head in the right perspective. We made our turn from Node 1 into the Destiny module. 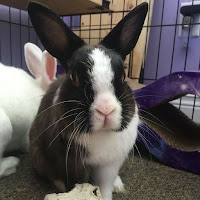 Mr. Toes
From Node 1, we could see the airlock and a couple of spacesuits velcroed to the walls. One of them was uncovered. Were the hoomins that careless? We knew there was an EVA scheduled for the next day, and it takes a long time to prepare for one, but I thought the suits would be all covered up! I made a mental note of that. 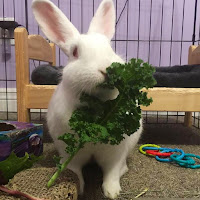 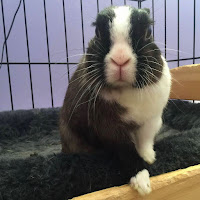 Mr. Toes
We moved on to Node 2, very slowly and very quietly. We got the "present" uncovered. It wasn't easy because if you don't have proper leverage in zero gravity, you can tug, push, and pull on something all you want and it will tug, pull, and push right back against you. You'd go nowhere. Space gymnastics, that's what we had to do. We could start a circus there! I held the package in my paws while Abby wrapped her legs around me and peeled off the tape that was holding half the cover on the package. She lifted it off, rolled it up, and tucked it away in her suit. She got the tape with the clip unfurled, and I watched it make a crazy, swirling dance, all thanks to its weightlessness. Once Abby had gotten the tape under control, we moved toward the junction of Destiny and Node 2. We crawled along the wall until we got to the first crew compartment. Its fabric door was closed, and it looked to me it was more suitable for storing a vampire during daylight than for acting as a personal space, but never mind that. There were blue handles next to the doors, so we threaded the tape through one of them and secured it with a little knot to keep the stuff from floating away. We extended the tape with the "present" as much as we could to make it equidistant from all the other crew compartments. At this point, we could only hope that it would stay in place. It was a strange thing, that "present." Freddie said the folks here would probably kill for a bite of it. He got some very expensive cheese, two thick slices of proper sourdough bread, and real butter. He put hot spices and salt on it because these sorry sods here can't taste a whole lot. For some unexplained reason, food can taste very bland in zero gravity. Worse yet, fresh produce and food are very, very scarce on the Station. Oh, how I'd love to watch what the sandwich would do to their brains. Especially the part when they try to figure out where it came from.
I was holding on to Abby's vest, admiring the sight of the sandwich relaxing in zero gravity, half wrapped in a space blanket when I felt a tug on my foot and my heart almost flew out of my throat.
Credits:
- Renee: taking care of critters, photography
- Mr. Bun, Ijon Thichy The Nth: story
- Mrs. Angie: editing

Thinking about it now, it seems so obvious that one of the nicest presents a hoomin astronaut could receive is a mega-cheese sandwich; how did we not guess?! Such sweet, compassionate little bunns :)=
-Jen (Kohl's mom)