The Disapprovers - The Bun Stuff, pt. 1

Last Week on the Disapprovers: With the help of Singularia, Abby and Mr. Toes do a practice session in preparation for their vacation trip.
We reviewed the video recordings of our practice from our vest cameras, talked about how our exercise went, and decided to repeat our "preview" visit one more time. Our nervous energy during the second trial transformed into focus, and we ended up with a firm grip on moving about in the zero-gravity environment. We had gotten good enough to be where we needed to be when we needed to be there. 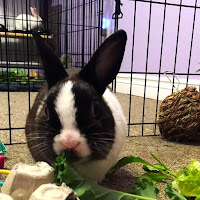 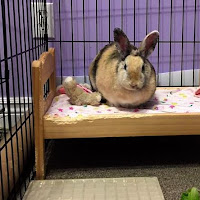 Pancake
For the next few days, we stayed up as late as possible, returning to our pads and pretended to sleep just long enough to keep the hoomins oblivious. We put a lot of time in learning by heart the layout of our destination. It was easier than I had thought. We found a decent number of tutorials and guides online, and we didn't even need to snoop around in ways I couldn't tell you about. I had only hoped that the resupply flight to the same spot we were going to visit would be delayed. Of course, no such thing happened. Mid-twentieth century space technology is as tough as nails. The hoomins who had developed it had to get it right. Their lessons were hard, and tuition took blood.
We agreed on the final rules of engagement for the trip. Abby and I would observe strict radio silence, to be broken only in case of an emergency. Izzy said they would tap into the general frequency, and we could transmit in Morse code, scrambled to pass for interference. But we were to use it only when necessary. 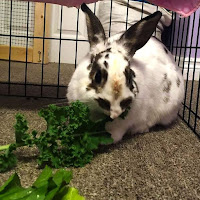 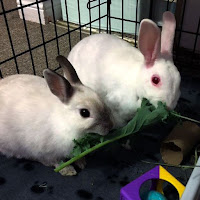 Penny & Ava
That meant our mission control would have no telemetry of any sort, including medical. That was fine by me. Pancake said I should shave my pits and glue wireless electrodes in those spots. I better not tell you what I thought of that. Molly thought that was funny.
Freddie installed red and green indicator lights on the front and back of our vests. Flashing green would mean "work your way back to the port," red ... well, it would mean you better be back at the port.
We were going to use our old trick and subvert the video feed going to Houston with a feed recording from another night. That's the same trick we're still using on our own hoomins. 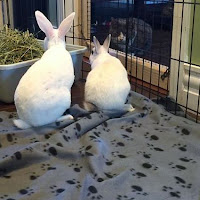 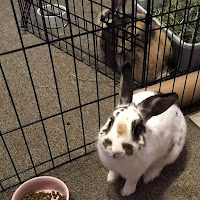 Molly
Penny and Ava insisted that we treat our little escapade and the inhabitants at our destination with proper respect and compassion. They thought that maybe smuggling something onboard as a gesture of goodwill would be a wise thing to do. Hence, Freddie procured and prepared such an artifact and wrapped it in space blanket material. I'm not sure that part was necessary, but who was I to argue? I would have used a simple, self-locking plastic bag, but whatever. The "package" was rather heavy and bulky, and now, very shiny. We were to unwrap it partially before deploying it.
One evening, I noticed something new. Ava and Pancake gathered around little Penny in front of the laptop. She had something mounted on her head, like goggles or blinds of some sort. I knew what it was, and I had to sit down. I was a bit stunned. Freddie came out of his workshop, pulling a little cart with a jug of something orange. He pulled up next to me, handed me a cup of spiked carrot juice filled to the brim and sat down. "It's not the best, Major, but there's a lot of it; cheers!" said Freddie. We toasted; I took a sip; he was right on both accounts. "VR set? How did you get them a Virtual Reality sim, Freddie?" I asked and motioned toward Penny with my head. "It was Pancake's idea. They are coming along very quickly, Major." It was a brilliant idea, of course. I knew it was only a question of time before we would be using VR for this type of training, and here it was. 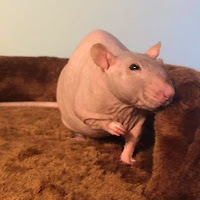 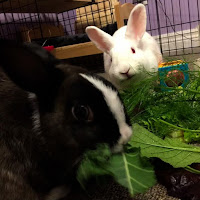 Mr. Toes & Abby
Penny had an air bottle in front of her. There was a USB cable connecting it to the laptop. She was all suited up, working the sim in full regalia. I watched over her shoulder how she flew around on the screen, moving with grace and precision in a small room. The air bottle she held was the controller device.
"Sammy and Quinn did the controller software; most everything else is off-the-shelf stuff. I helped them hack it a little bit, but they did most of it themselves," Freddie said quietly.
I didn't know what to say. I felt upset. No bun had told me a word about it. Abby and I had to work our bumms off in Singularia to get our practice in, and here was Penny, sitting in the living room outperforming me by a huge margin. Right then, Abby hopped over with some biscuits, sat down next to me, and took my empty cup out of my paw. She motioned to Freddie, and he topped it off for her, grinning.
"So, my dear, what are we moping about now?" asked Abby with a full mouf, crunching the biscuit with gusto. "You know, sometimes the passage of time feels very tangible. I feel like it just crashed over my head and rang my bell" I said quietly. 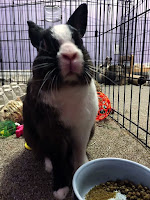 Mr. Toes
Freddie and Abby both looked at me. Freddie said, "You'll have your turn at it, Major. Penny and Ava need all the help and all the time compression tricks that we can muster. You, on the other hand, are up for the real thing tomorrow. Do you think I feel any better about this time thing?" Freddie squeezed my paw, as he finished. I nodded, staring at the screen, where Ava was buzzing about on the screen, like a bee.
Abby put her paw around my neck and said, "We may as well try to get some good sleep. All systems are a go for tomorrow night, Mr. Toes." Freddie cracked a huge smile. I slowly hopped off toward my pad.
Credits:
- Renee: taking care of critters, photography
- Mr. Bun, Ijon Thichy The Nth: story
- Mrs. Angie: editing

It looks like everyone is very happy together, and so clever, with all the sleuthing and plotting.