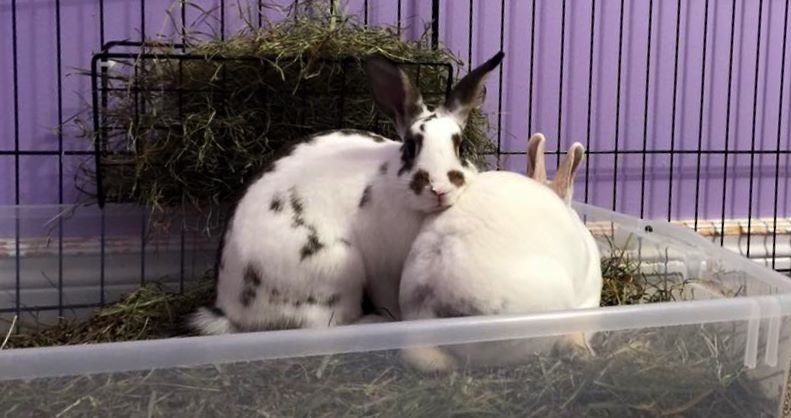 Our next chance to get out would be determined by two things: favourable weather and absence of hoomins from the house. For a while, either they were home or we had sleet and rain. None of us enjoyed this "hurry up and wait" lifestyle. We kept busy going over all our equipment, testing batteries, cleaning, playing "what if" games and contriving tabletop simulations for what we could run into. 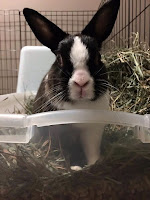 Then, one afternoon Bruno ran up and whispered, "The good news is they're leaving tonight for a sleepover at their friend's house and we're supposed to have a clear night! The bad news is they are coming back early in the morning."
We decided to set out very early in the morning. Leaving several hours before dawn would give us enough time to deploy the probe and return. Suzy decided we should have somebunny as a lookout in the window since it's going to be pitch black. She volunteered to bunn the position. Among us, she's the best at keeping the bird's eye view on things like that.
On the eve of our second EBA (extra bunnicular activity), we nomed a ton of hay, drank plenty of water and tried to get a few hours of decent sleep. Hoomins muttered something about being relieved watching us ravage the hay with gusto and monstrous appetite. ... if they only knew. Once they convinced themselves that we were all settled in for the night, we heard the door shut and their 'rover' rumble out of the driveway and fade into the silence of the night. 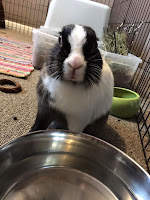 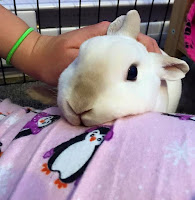 Good sleep was had to get though. I kept tossing and turning all night and just when I thought I was about to get some zees, Suzy was tugging on my ear.
"Come on Major, time to gear up!" I sat up straight, my head was eager to go and it desperately tried to drag the rest of my body with it. My eyes burned, my paws felt cold and hot at the same time and my gut had a knot in it. In other words I felt great and good to go. Water, I needed some water. I heard that hoomins consume something called "quophee", or "quofy", or something like that and it supposedly perks them up. Right now I wished I some of that "kawfi".
All of a sudden I sensed someone was close by. Soft, yet heavy and laboured footsteps were coming from the other bedroom. It was Bruno. Usually, the fluffy, browny beast of a cat moves like lightning, but today he looked like an attack tiger. Zeus was sitting up on Bruno's back, riding like Bunn Wayne or Atilla the Bunn, looking majestic, with his little paws on his hips. For a moment we stared at him, mesmerized.
We had all paws on deck that morning, including our ratty friends: Frankie, Freddie, Zeus and Mila. Frankie and Freddie would work the mission control, Zeus would ride the cat with us and Mila would stay with Suzy.
Zeus was all decked out in a jumpsuit, gloves and night vision goggles. He carried the small, olive like probe and the remote explorer. We made a bee-line for the basement window. Hop, hop, off we went and soon we were climbing onto the table next to the window.
We popped open the window. Cold, morning air rushed in and we could feel the damp morning chill flowing over us. We've made a rapid descent to the ground. Bruno and Zeus went first, then Abby and Molly. I went last. Suzy kept watch, perched on the window with Mila by her side. Suzy brought a bag of alfalfa to snack on. She pulled out a twig and started chewing it slowly, all the while looking out over the dark garden. 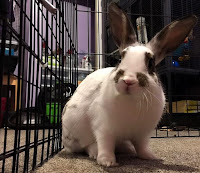 The back yard was hardly recognizable now, even with the full moon glowing like a frozen sun. Bruno led the way with Zeus acting as a navigator. We followed them single file. I could see how ravaged the garden was. Most of the greens were picked and whatever was left looked wretched and battered. I was getting cold now and the mix of cold air and adrenaline was giving me some strange shakes. We've made it to our destination in what felt like a record time.
Abby was wheeling about, trying to recognize and pinpoint the exact location of the dig. Zeus kept saying "It should be right there, right under your paw!", but to her, the spot just didn't look right. She started clearing away some of the rubbish left by the recent storms and rains, hoping to recognize a detail of the opening. How accurate was that GPS position Zeus was swearing by?
"Hey, what's this?" asked Bruno, pointing to something right on the edge of the area Abby cleared. She turned around, leaned in for a closer look and worked her whiskers close to the ground.
"That's it!", she exclaimed.
Everybunny started clearing out the debri and before we knew it, we were unplugging our tunnel. We pointed our headlights at Abby's paws and tried to illuminate the spot she worked on. Surprisingly, the tunel showed no flood or cave in symptoms.
Zeus dismounted and started getting the probe ready. I hovered over him, watching how he tested power and prepared it for deployment.
"I'm getting the probe signal." we heard Frankie on the radio. Zeus pointed the probe at my mug and Frankie got excited, "Looking good Major, projecting some serious disapproval there!" 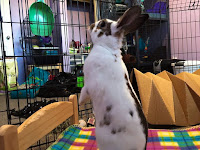 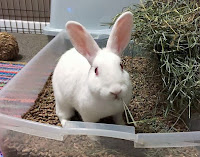 By then Molly cleared out the tunnel and said "OK, let's try it."
"Here, keep an eye on it." said Zeus. He handed me his little tablet, and turned toward the tunnel. He called out to Molly, "Let me go first."
I looked at the little screen and watched the jumpy, stark video feed from the probe. Abby and Bruno gathered around me, transfixed by the imagery.
That's when Suzy came on the radio,
"Somebunny better keep a lookout! You can't be all staring at it at the same time! Mr. Toes, please holster that thing and keep a lookout. Frankie, can you please 'play call' the video stream?"
Bruno and Abby perked up, rudely yanked out of their stupor. 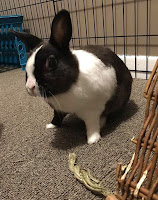 "Of course!" replied Frankie in his measured, calm, best radio host and NASA commentator voice.
"They're almost there, Zeus is in front of Molly, they have both headlights on.
It's very dark, there's no ambient light, at the same time the image is washed out by the bright lights.
They're over the 'thing' now.
Zeus is trying to clear out more sand from it, but he's struggling, his tiny paws can't scoop much.
Now Molly is helping him and she making good progress.
She's shoving all that dirt to the sides.
That's enough, Molly - ... that was Zeus and I think they are ready to deploy the probe.
Zeus has the probe in his paw and it looks like its lens is resting on the object, the video feed is very dark now. I'm not exactly sure what Zeus is trying to do.
Come on, what's going on? How come it's not opening like it did for you, Molly?
It responded to my touch, Zeus, let me try something ...
That was Zeus and Molly, trying to coax the object into creating an opening and now Molly moved just a little bit closer to it.
She's extending her paw, reaching over Zeus, finally able to touch the surface of the object.
She placed and pressed her paw on it.
Nothing's happening yet...
There's some movement now, I can clearly see an opening forming under and around Molly's paw.
Zeus is trying to stretch and reach over that opening, without falling in...
He's lowering in the probe, holding it by the cable.
The probe is illuminating the surroundings very brightly.
Looks like Zeus finished the deployment and is motioning to Molly to remove her paw.
She did just that and now the opening is slowly closing.
Video stream from the probe continues, still a little jumpy as the probe steadies itself and it's slight pendulum motion dies down.
We still can't see very clearly, in spite of the very strong light from the probe, we'll have to adjust some settings here, hopefully the image will clear up.
We to see the raw data stream coming in and we'll process that as soon as we can.
Molly is backing out and Zeus is following her.
He was able to turn around in that tight space without a problem and he's able to move head first."
I had to sneak a peek at the opening of the tunnel to see what's happening.
"I see Molly, she's almost out!" I announced.
"Thank you, Frankie, great job!" said Suzy.
"Excellent!" yelled Frankie excited and continued, "... hm, would you look at that ..."
- Thank you Renee!
Follow Suzy, Molly, Abby Mr. Toes, Frankie, Freddie, Mila and Zeus on FB
Posted by Mister Bun at 3:00 AM

Surely the hoomins have noticed some evidence of the EBA by this point? Or perhaps I'm giving them too much credit for being observant and such :) Kohl's dad thinks that maybe Billy and the Blue Hole are what awaits the furry squadron in the tunnel...
-Jen&Henrik (Kohl's mom and dad)

Is it the Ground hog?