Author's Note: Last week Mr. Toes started telling Zoomer a story about one of his adventures. He's hoping it will ease the tension on the ship and let them both relax before the risky maneuver of separating their craft from the stuck booster. We join them as Mr. Toes carries on with the story.
"We watched the temperature rising, and we wondered if the hot plasma would burn through the hull."
For a moment, I pretended to gaze up toward the main control panels and the forward-facing windows. In the corner of my eye, I saw Zoomer listening intently.
"... so, did it burn through?" implored Zoomer.
"Well, the temperature leveled off. Then, we noticed how dark the ground was. We made our initial descent over an area still experiencing night, and those parts were just pitch dark as if the power went out over the entire continent. That was only the beginning. Pancake called out our nav system defaulting to the magnetic compass. We weren't picking up any guidance from the satellites, so the autopilot kept switching to the magnetic compass for reference.

Joey and the warning lights
You see, we were heading for this big island shaped like a bunn sitting up on its hind paws. The whole thing is one giant park. You ought to go there if you get a chance. When we got visual contact with the ground, it looked like we were in the right area, but as we got closer, we realized we would never make the island if we followed our current heading.Abby finally turned off the autopilot and went to manual controls. We were pretty sure we had the right spot in front of us. There's no other island like that, so it was impossible to confuse it with something else. We recognized the coastline. From our altitude, everything looked right! Only the guidance computer kept protesting with a bunch of warning lights and chimes. Joey finally turned it off. Pancake turned on the panoramic recording of our approach. I have no idea what prompted her to do it, but it came in very handy later on.
At this point, we knew that our little vacation would be no picnic. The lower we dropped in altitude, the more dismayed we became. Where we expected to see the only cosmodrome on the island, we saw a thick, primordial forest. To be honest, we couldn't recognize the place anymore, and Abby started to look for any clear spot on the ground. We had to land somewhere. We found a couple of hills and a bit of a clearing in the woods. Abby set us down as gently as she could on top of the taller of the two hills. We waited at idle for a moment to see if the ground would shift under us. Joey had the shutdown checklist ready, and he rattled it off in a heartbeat the instance Abby called for it. 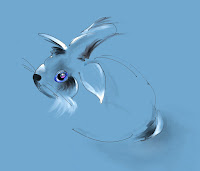 Zoomer - study
Then we sat there. Everybun seemed frozen in their seats. No bun wanted to make the first move even though our diapers had to be full. I knew mine was. Finally, Pancake wiggled out of her restraints and stumbled out of her seat onto the flight deck. Once the initial shock of it all wore off, a hopping mayhem broke out. A mix of pandemonium and emotional collapse in the likeness of an imploding star took over us. The girls wanted to do something, anything, while Joey and I couldn't get out of our seats. We were frozen stiff with fear.
Once we started to come to, Joey wanted to go out and have a look around. Abby yelled at him that if he touched the hatch, she would stab him in the neck with a tranquilizer. We decided that looking out of the windows would suit us just fine for now. Pancake and Molly resurrected an old, rusty hoverscooter from the storage area near the power plant. The thing turned on and looked like it was in a working order! We drew lots to see who would get to go on a little reconnaissance mission the next day; Molly and Penny got the honors.

Molly and Penny
As our stomachs settled, we started thinking about two things: How were we going to fix the cover on the landing skid, and how in the hey would we get out wherever we were? We needed a dry dock for the first one and a miracle for the second. We definitely had one stinking, pickled carrot on our paws and not a picnic.
Joey and I couldn't sleep so we took the first watch. OK, we didn't need to keep watch, but we stayed up anyway. We turned down the lights on the flight deck and stared out the windows. We almost had a full moon and the night sky was crystal clear. We marveled at the forest a little downhill from us."

Lurking from the forrest 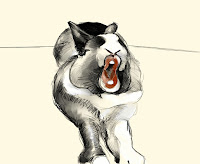 Mr. Toes
I stole another glance at Zoomer. She was still with me; her nose kept twitching at a pretty good clip, so I carried on.
"Then, we saw something come out of the woods. Actually, we noticed it when it was halfway between our ship and the trees. We sure as hay didn't expect anything to come out of there and, when it did, our brains just tried to ignore it. Joey stood up in his chair ready to thump, but I put my paw on his back to calm him down. You know, it's funny how sometimes you stare at something and it just doesn't make any sense to you because you don't want to see it. My mouf dropped when I finally realized what was trotting toward us..."
Credits:
- Renee: taking care of critters, photography
- Mr. Bun, Ijon Thichy The Nth: story, illustration
- Mrs. Angie: editing

Follow the Characters of X Plus Bun on FB
On Instagram @dollyalittledisabledrabbit
Visit our About X Plus Bun page to learn more about the cast members and catch up on other stories!
Posted by Mister Bun at 3:01 PM

A puzzle within a conundrum - oh my.