I had a bad day in the simulator today. I thought the sim malfunctioned when I tried to dock the craft manually, but they wouldn't hear of it. The exchanges got so heated that the deputy director of training got involved and personally sent me off to cool it. He then ordered me to go and clean the old hangar. Of course, I saluted him and decided in the last split second to use all of my toes and not just the one. I took that as a good sign; my cooling off has begun. 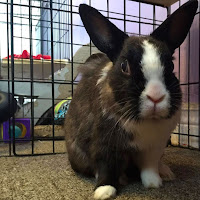 Mr. Toes
During the very early morning hours, I drove a forklift to the old hangar used as a storage depot. The abandoned parking lot was quiet. A single, old, lonely lightbulb over the side entrance barely gave off any light. I felt bad for its tired wolfram and wished it could tell me the stories it had illuminated during it's younger glow.
We were going to use this hangar for transient training vehicles. I had to wrestle with the door lock. It wasn't ready for any visitors at this hour and wouldn't let the key make half a turn; it took me a lot of wiggling of the key to convince the lock to let me in. I found the light switch, and a couple of retired lightbulbs by the rafters begrudgingly gave off a few photons.
I pushed the main doors open and let in some fresh air. That spooked some critters by the ceiling, and they flew off through the busted window. What a mess this place was. There were storage containers stacked almost to the ceiling. Hopping past them, I had to use my torch to see what was in between the stacks. Beyond the containers squatted something tall and massive. The shape made no sense aft first, and I telescoped for a better look, but it was no use. After a while, I realized I was looking at an antique N-BUN-33 rocket engine. It sat lonely, flanked by piles of rubbish and scrap on both sides. As I got close to it, I noticed that half of its combustion chamber was gone. It looked cracked and cleanly broken off. I carefully hopped around to see what else was there. I was worried about tripping and getting knocked out or getting stabbed and buried under an avalanche of rusted scrap.
By now, I had forgotten all about the sim fiasco. I had also forgot to tell anyone that I was coming out here to do the job. I wasn't sure if this order to clean this hangar was a rhetorical one or not. I pressed on and went around the back of the old engine. I had hoped something like that would rest peacefully in a museum, instead of doing solitary time in an abandoned hangar. It probably hasn't done anything to deserve this cruel forsaking. 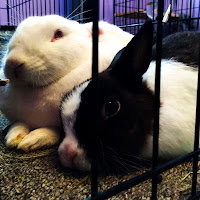 Abby & Mr. Toes
I was hopping around it, touching the cold metal from time to time as if reassuring it that it is going to be OK. I turned around to go back the same way I came, to start hauling some of the containers to the parking lot. We would have to have space in the building to drop an empty container for all the trash.
That's when I noticed the capsule. At first, I thought that it was another engine, this time laying on its side. When I approached it, I saw the conical shape and the corrugated texture of its outside skin. I couldn't believe it. The concave bottom and the sides have shown signs of charring. Was this a space-flown capsule? You just about had to carbon date it to see how old it was. There was no mistaking it; this was an original Bunkury capsule!
It lay on its side, stuck between a couple of old electrical generators and an AC unit. The entry hatch was low to the ground, and I shone my flashlight into it. I slowly stuck my head inside and looked around. I've only seen one of these capsules in old pictures, and here I was, looking at the insides of one. Very carefully, I stepped into it. The pilot seat was in front of me, serving as a wall since the capsule was turned on its side.
On my right were the guidance displays. I was looking at a real "eight ball"! The light from my torch caressed the control panels, the dusty switches, and the lights, without disturbing their repose. I stopped on the master switch and stared at it. Of course, it was silly to think the master switch would do anything else other than click. I pressed it anyway. The master caution light, confused, blinked and came to life. Pins shot through my toes, and I froze. The rest of the master panel lights came on. I flipped the subsystem switches. The bewildered circuits started running systems diagnostics, chirping nervously. Most of the lights and press buttons lit up. I had to sit down; I hoped the side panel wouldn't mind my bum resting on it. 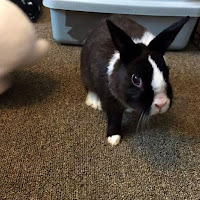 Mr. Toes
The attitude indicator mesmerized me, and I started scratching my chin. There was no way the batteries here were still good, was there? Could the fuel cells still work after Bun knows how long?
Outside, the sun must have been preparing to rise, and the birds were going wild, sounding giddy and yapping about an orchard with a bunch of fermented apples on the ground.
I had days like that.
The wild bunch flew off and silence settled back in. I shifted my position to get a bit more comfortable and kept staring at the panel lights. I couldn't help but think about the last time those lights were revealing the pulse of the capsule and telling the fortunes of the bunstronaut strapped inside. He or she, suspended in the void between celestial bodies, would be looking out of the tiny window, pondering a bird's eye view on things no birds had ever enjoyed. The view would constantly change as the craft circled the globe every ninety minutes or so. A sunset, followed by a sunrise, followed by a sunset, followed by a sunrise and another sunset. Every time the sun was completely out of view, the stars came out in droves and shone like never before. It was their showtime. I enjoyed every star twinkle my eyes could catch. I sensed another sunrise coming up and became focused on the sliver of space where I expected the sun's awakening. Then, just as the sun started to come to life again, my capsule shook violently, and I was glad to be so tightly strapped into my seat. Without that, I was sure to be thrown against the cabin like a rag doll. The sun blasted my eyes, much harsher and whiter this time. Somebun was shaking me by my shoulder. I looked up. That was no sun. It was Abby and Pancake's headlights. Quiet, they stared at me in disbelief. The capsule was dark; all the lights were out. 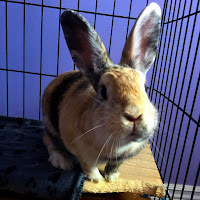 Pancake
"Good grief, Major! We thought you were a goner, that a hawk got you or something!" said Pancake.
Credits:
- Renee: taking care of critters, photography
- Mr. Bun, Ijon Thichy The Nth: story
- Mrs. Angie: editing

Good to see Mr. Toes in one last story.