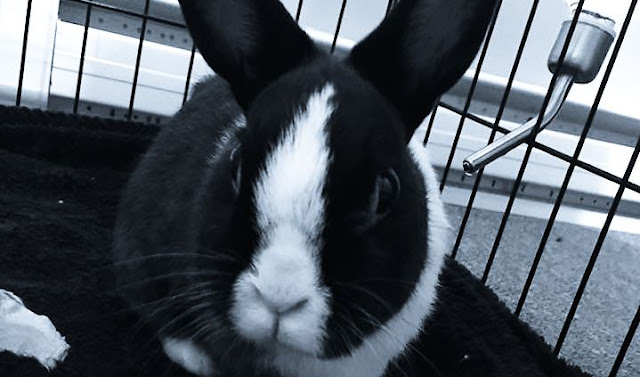 It is with a very heavy heart that we're sharing the sad news of Mr. Toes making his journey to the Rainbow Bridge. He suffered a stroke and spent his last moments in the loving arms of his hoomins.

He enjoyed 11 years of wonderful life with the most exceptional bunny servants.

Renee says, "He was at the pet store before rescue existed. He was there for 6 months. No one wanted him. So I bought him he was marked down and 6 months old and Brad bought his cage."

He inspired The Disapprovers and X Plus Bun stories, and we will sorely miss Him.

Our hearts go out to the family of Mr. Toes


PS: Lately, I've been thinking a lot about Mr. Toes and started working on the early episodes of The Disapprovers, to tidy up and complete the series. Below is the re-imagined  version of Mr. Toes meeting his hoomins.

It was a quiet, not too dark but soggy night. We had freezing drizzle and low clouds, reflecting the town's sodium vapor street lights, making for a ghoulish and putrid view. This was the last time I'd see Zip, my best friend. Once I decided to put in my notice and to retire, there would be no going back. We took all of my personal possessions, or whatever was left of them, and we burned them in a small bonfire by the river. Zip would escort me as far as the park, but after that, I would be on my own. I'd play a bunny that some hoomin "set free" in the park, in front of a particular couple of hoomins. We had it on good authority they were pretty good at taking care of strays and rescues. I'd put on a bit of a charm charade, and all would be OK in the end. It sounded risky, but we had it all figured out, and this was nothing compared to the antics I would be leaving behind.

Zip checked his watch; it was time to go. The park was quite a ways away. We started hopping at a good clip, just to keep warm. It was getting colder as the frontal passage approached.

We trekked along the river bank, foreboding and quiet. We had to be on the lookout for predators, but at least we didn't have to think too hard about where we were going. The park would be downstream and to our right, and if we got to the road bridge, we'd have gone too far. Zip was a great companion on this last adventure. He shed his suit and went along barefoot to blend in and be exposed to the elements in solidarity.

Finally, the park lights came into view and my stomach sunk a little. The drizzle started changing into rain. When we came to the edge of the park, the place was mostly empty. A few hoomins hurried along, disappearing into the shops along the sides of the park.

We paused behind a tall, thick shrub. I hugged Zip, and we said our goodbyes. Now we would try to spot the hoomins we needed and avoid the others. We hid behind an empty bench and waited. It was getting very windy, and the rain was freezing. I was starting to shiver. Maybe I was getting too old for this? My mind shorted for a split second, and I thought, "Retirement my fuzz! I should be in a warm, cozy burrow now, having some tea and snacks!"

Then Zip tapped me on the side, "Your three o'clock, I think it's them!" I looked up. Yes, those were my future hoomins, bundled up, rushing along with their heads down to keep the rain out of their eyes.

This was it. I looked at Zip. He scratched my side. As the hoomins got closer, Zip ran out in front of them. They perked up. I followed him, and I froze right in front of the hoomins. It took them a second to realize two bunnehs were staring at them. I pretended to run and took a couple of hops to my right while Zip went left and turned around. The hoomins looked like they had taken the bait. I hopped again, never letting them out of my sight, and froze in front of the girl hoomin. Zip took a step sideways and blinked at me. I watched him break into a full gallop across the park and disappear behind a bush.

I still couldn't believe this was happening. I would never see Zip again, and I wished him a safe return to the base.

The next thing I knew, I was getting picked up off the ground and instinctively tried to run before I reassured myself that this was why we had come here. My heart pounded as the hoomin unzipped her jacket and hid me inside to shelter me a little from the bitter cold. I looked at them both. One started to scratch my head. Maybe this would work out?

What a compelling and thoughful story. I sit here at my desk, tears in my eyes for all the bunnies who have hopped to the bridge. Good bye, Mr Toes . We are glad you found some good bunny people and had a wonderful, safe life. ken&kaci

At a loss for words :(=
We will miss you, Mr. Toes. Give all of the other bunnies in the Big Garden a nose bonk and tell them we send our love. Certainly, there will be many opportunities for EBA up there too! Comfort to the hearts of your very kind hoomins and to your sweetheart Abby.
Much love,
Jen&Henrik (Kohl's mom&dad)

Mr. Toes was my favorite. I'm so sorry. He has a lot of friends on the other side though.