The Disapprovers - The Bust, pt. 4 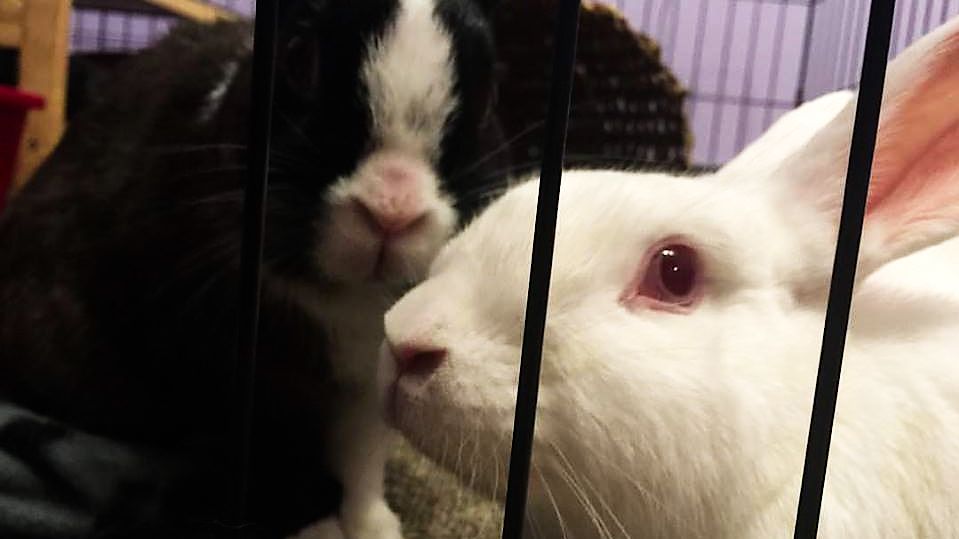 Last Week on the Disapprovers: The Disapprovers carry on with the rescue when they discover an additional room with scores of critters they were not aware of being there. When they thought that things couldn't get worse, the sysadmin walks in on them.
The hoomin ape remained motionless for a long time. Finally, with one eye on him and the other on the rescue up in the cage, I motioned Quinn to get going again. He slowly shifted his attention to the rescue and the harness, nervously fumbling with the equipment, trying to untangle the mess that the rope and harness became. I heard Izzy's play by play commentary on her communications with the hoomin at the door. She texted him. The hoomin looked at the gizmo in his paw and visibly sunk deeper in disbelief. 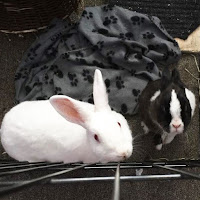 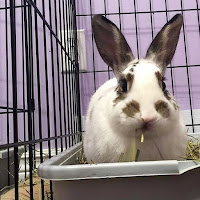 Molly
He slowly twiddled his thumb over the device and paused again. Around the room, I could hear the bustle of the evacuation picking up the pace again. After all, what else could we do? I noticed the hoomin looking at no bunn in particular and nodding his head — I assumed — in agreement with something. I must have missed that last radio update from Izzie. The hoomin very carefully put down his shoulder bag and stepped into the room. Bruno still had the panzer-darter trained on him and moved back and to the side a little. The hoomin looked at Bruno, his eyes wider than ever, and kept running toward the back of the room. "I got a job for him," said Izzy as we all watched the intruder move slowly through the room, passing right by me. He looked at his watch and picked up his pace, a skip short of a full-blown panic. "Carry on with the evac, everybunn. He's gonna give us a hand here. He just wants to pick up his stuff from the office before the feds get here. He said he missed our initial call because his phone was turned down," Izzy continued. 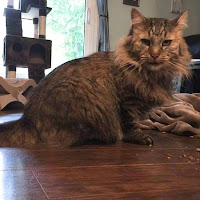 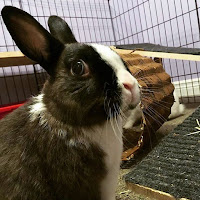 Mr. Toes
When my rescuee got to the ground, I paused, and we watched what would happen next. My rescuee was spellbound; he snuggled close behind me, stuck his head out and, straining his one healthy eye, tried to watch as well.
When the hoomin passed the next cage that still had a critter in it, he stopped and carefully, almost too gingerly, picked up the white bunn and gently set it on the floor. For some reason, he kept looking at me, still wild-eyed, but showing signs of calming down. His eyes were darting between me and the little bunn he set down. He moved sideways to the next cage and worked his way toward the second room. 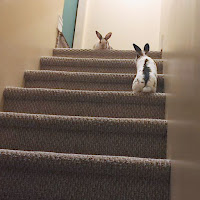 Molly & Pancake
I asked Quinn to follow me, and we switched to the other side of the lab to help whoever needed getting to the ground. Molly and Pancake became busy, corralling all the rescues that were, suddenly, all over the place, disoriented and confused. They might have seen this hoomin before; they might have been scared of him the same way that they would have been afraid of any "proper" lab worker, so we tried to get them out as fast as possible. 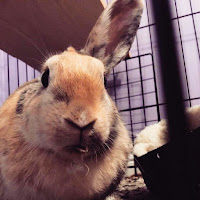 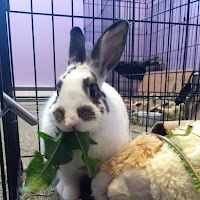 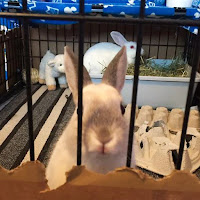 Ava
When Quinn and I got the next bunn to the ground, the hoomin was back in our area again and worked "my" side of the lab. Zeus, Lincoln, and Freddie decided to dart back to the temporary shelter and bring back those plush toys. Abby, with a couple of rescues in tow, followed them. They were back by the time the hoomin emptied all the remaining cages. As they dragged in the net, full of polyester ducks, bears, and rabbits, Abby grabbed one of them and tossed it into the nearest cage. The hoomin, the smart ape that he was, started "aping" her and began throwing the toys into the empty cages. He even grabbed a pair of latex gloves and started locking the cage doors. That was just too much for me. I sat on my duff and got my canteen of water and handed it to Quinn. He took a long, savory gulp. I did the same, and we enjoyed the show.
All this was taking place without a single word being spoken. Only the climate controlled vents broke the silent semi-pantomime almost worthy of Charlie Chaplin. I looked at my watch; we were about an hour and a half ahead of schedule. A little while back, I thought we were all done for, not to mention the bust looked like a bust.
When all the toys were put away and cages were locked, I looked at the transformed room and tried to take it all in. The hoomin stood there as well and gave me another look; then he started to walk toward me. I heard Bruno arm his panzer-darter. The hoomin slowed down and approached with great apprehension. Stretching as far as he could to keep maximum distance from me, he leaned over and extended his big, grabby hand. I tensed and leaned back and away from him. My eyes got big, and my ticker was ready to explode. Then, the hoomin gave me a little nose rub. 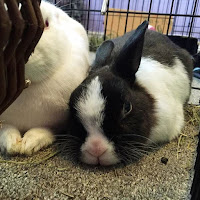 Abby & Mr. Toes
After a moment, he straightened up and backed away, picking up speed, finally turning away, grabbing his bag, and running toward his office.
Bruno, Quinn, and I were the last ones left in the lab, so I called Izzy to get a final headcount and made sure we were leaving no bunn behind. When we were certain that every bunn was accounted for, we headed for the port and on to the temp shelter in the wreck.
Credits:
- Renee: taking care of critters, photography
- Mr. Bun, Ijon Thichy The Nth: story
- Mrs. Angie: editing

Follow the Crew of Disapprovers on FB
On Instagram @dollyalittledisabledrabbit
Visit our About the Disapprovers page to learn more about the cast members and catch up on older episodes!
Posted by Mister Bun at 3:00 AM

What on earth did they text to the sysadmin?! Whatever it was, it worked! :)=
But now the question is, what will they do with all of the rescued? Start a rescue franchise? News stories would begin something like: "Bunnies and other small critters are disappearing from labs all over the world, and no one seems to know where they have gone..."
-Jen&Henrik (Kohl's mom and dad)