The Disapprovers - The Hoist Exercise

Last Week on the Disapprovers: The crew welcomes a new bunneh crew member named Pancake. They get to know her better when Molly proposes a night of playing bridge. Pancake opens up about her past, and the disapprovers include her in their plans for the bust.
We started making our final preparations for the bust.

Molly suggested we explore and get used to the lab room, utilizing Singularia's "preview" mode again. Zeus and Frankie went on one night and returned sick to their stomachs. It was so bad that they put a remote port out in the yard, in the middle of a bitterly cold and rainy night, and smoked a stogie. That made their guts even sicker, but it took their minds off what they saw in the lab. Molly led the rest of us on the preview expedition, and we didn't fare any better than the ratties. Nonetheless, we repeated the exercise couple more times. 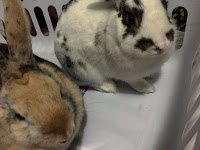 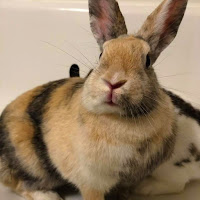 Pancake
Pancake thought it would be a good idea to make a simple harness and pulley system for lowering the critters from the cages to the floor. Jumping from the height of several feet is out of the question for lagomorphs or ratties. She and Zeus made a prototype of the harness, and we wanted to test it on Abby, but we had a hard time finding a suitable place in the house for practice. Molly proposed going to the lab itself to rehearse on an empty cage, if there was one. Oh, that was so tempting. We kept staring at the surveillance feed as if we were looking for a sign that said, "Come on down and give it a try!" In the end, we didn't. Zeus liberated us from the bonds of fear, uncertainty, and temptation by voting against it.
We looked around the basement and thought one of the wire shelving units would do the job. It was five feet high, and that would be enough for us. Abby divided us into teams of two ratties and a bunn. Ratties would climb to the top of the cage, open it, hook up the pulley to the structure and secure the harness around the critter. We knew that at least some of the bunns were in awful shape, so Abby played one in distress. 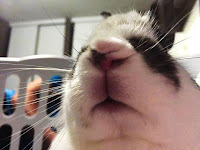 Molly
We had to get her up on the shelve. Izzy and Mila climbed with the line and secured it. We put Abby in the harness and tried to hoist her up. It took Pancake, Molly, and me to raise her. We held the line tight until Izzy and Mila were able to help Abby get on the shelf. 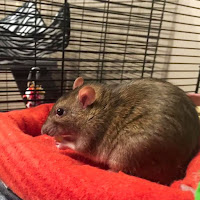 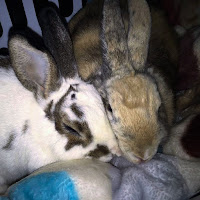 Molly & Pancake
She laid on her side and pretended to be unresponsive and then resisted having the harness secured around her. Well, we had already seen how we would have to change the harness. It took way too long to get it around her. We also had to replace the hook at the end of the line with a carabiner because it almost came off, and it scared the pellet out of me. Zeus had a couple of them on his vest (we'd suited up for this, gloves and all, to keep the EBA practice as realistic as we could) so we replaced them right then and there. We added another carabiner at the bottom of the structure. Feeding the line through the carabiner, one bunneh could slowly release the line and control how fast the harnessed bunneh came down. I braced myself with one foot on the shelf and gripped the line tight. Pancake and Molly stood by, paws ready to help. Abby slowly swung away from the cage and let Izzy and Mila gently push her off. She was a big bunn. I felt tension on the line, and I held it even more tightly. Molly and Pancake flinched and gripped the line. I had a good grip though and started releasing the line through my gloved paws. Once I felt more confident that I could hold it, I released it a bit more quickly, and Abby was on the ground. Izzy unhooked the top-end carabiner and dropped it. 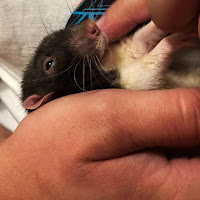 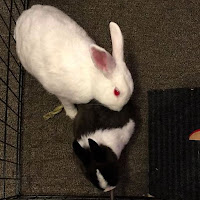 Abby & Mr. Toes
We timed how long it took to get a critter the size of Abby lowered to the ground. When we did the math, it became clear that we would have to have at least two setups, and we would need to work on a minimum of two critters at the same time. In the best case scenario, we were looking at a solid night of hard work. We would also need a cart or a board to transport the ones who had difficulty walking to the port. One or two of our old roll-boards we used for exploring the artery would do. The tricky part was we couldn't rush any of the little steps making up the rescue of one critter.
For the sake of practice, we all "took a ride" in the harness. That was scary. I don't like heights, so stepping close to the edge of the cage and trusting that Abby would hold the line took all the trust I could muster. Izzy got an idea to ease my anxiety. She got on top of me while I was harnessed and rubbed the top of my head with one paw while holding onto the line with the other. You know, that helped. I closed my eyes, relaxed, and gritted my teeth. We were on the ground directly. 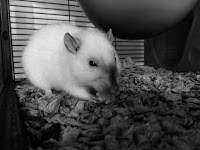 Mila
The remaining big unknown was the reaction of every critter we would try to evacuate. They would have no idea what to expect. Could we just use a bullhorn to make an announcement once we were there? We had plenty to sleep on.
Disaster struck the next day. Our hoomins found Mila unresponsive. They suspected a stroke. All our ratties were frantic, and our hearts broke. Again, losing Mila made it clear that we've bonded over the course of our adventure. I wondered whether we could even hope to keep up the pace in this gut-wrenching race against time. Did we have any options other than to press on?
Credits:
- Renee: taking care of critters, photography
- Mr. Bun, Ijon Thichy The Nth: story
- Mrs. Angie: editing

Do you ever just lie down in their midst and cover yourself with greens so they climb all over you? I think I would.

Hey all--I am watching a 1977 French movie on Hulu called Potiche. So far there has been a scene where Catherine Deneuve is jogging in the woods and sees some bunnies mating. I confess I rewound it. They were so cute.

I just read down to the end. Did Mila die or was that part of the ruse?

Unfortunately, Mila did die :-( I try to follow what's happening with them and for some reason decided to include their departures for the rainbow bridge. The first time that happened was about a year ago when Cleo died. On the flip side, when Renee adopts a new critter, they become a member of The Disapprovers, with some exceptions though. She has a newt, a mouse and couple of ratties - some are awaiting their introduction to the story. Recently, she adopted Pancake and couple of other little bunns. The two will be introduced in the next couple of episodes. Thank you for reading 'to the end'! :-) <3

So sorry. This is right on top of Suzy.

Indeed. Mila's health was never the best, there were some neurological issues going on for a long time. But, she had the best life a ratty could have. She was a rescue from a pet shop, someone returned her after a snake wouldn't eat her :-(