The Disapprovers - Minerals for Thought 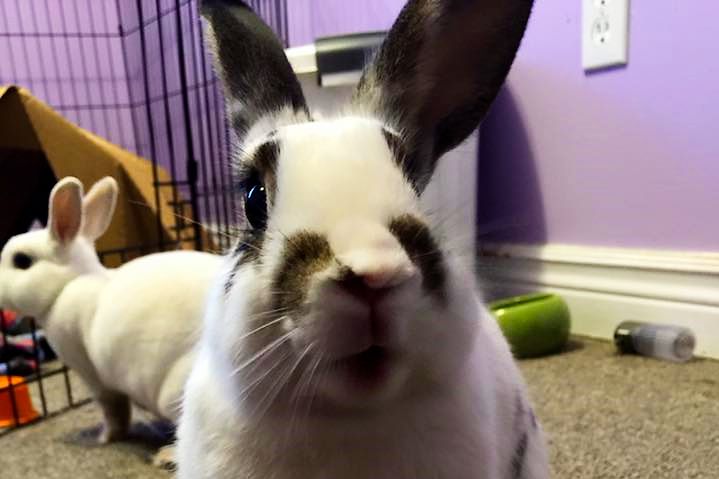 Last Week on the Disapprovers: After an encounter with a lynx, Zeus and Mila meet with Molly and Mr. Toes. They prepare to explore a mysterious, tube like object found at the deep end of the artery.
Zeus crossed the boundary between the artery and the pipe thing first. Molly followed and I was last. We paused and took a good look around. Zeus was carefully sniffing around. I did too and it definitely smelled like other critters have gone through here. This tube was maybe 1/4 packed with dirt. It had to take a lot of time and a lot of little footsteps to carry in this much dirt and muck. The 'ceiling' in this tube was maybe 2 bunns telescoping tall. Molly took out her SwissBunny knife and probed the dirt under our feet. It was packed hard. It was softer than sandstone, but not much. Zeus went to the side and tried to scrape the side of the tube. He banged hard on the round wall of the tube, hoping to get a better feel of what it's made of. I expected the sounds of echoing like you'd get in a cave, but his pounding sounded like dull thuds. He chipped off a small piece. We passed it around, feeling its sharp edges and rough surface. I think that stone like coating had to build up over a very long time. I could see very thin layers of different colors. We wondered how thick that stone lining was. 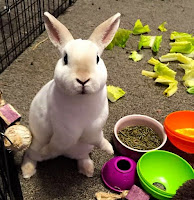 Suzy
I looked behind me at the artery we had just came out of. I looked at the top where the artery and this tube came into contact. The boundary between them was pretty smooth, as if something snapped off the tube. I wondered why the artery tissue didn't get inside here? Was this tube encased by the artery?
Suzy broke our silence on the radio, "I wonder if this was ever meant for hoomin use? One could only crawl in it."
"Let's move on. We'll try to pick up more samples on our way out.", said Zeus. 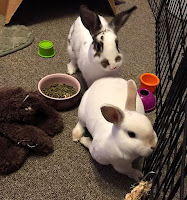 Molly and Suzy
We hopped off and approached the set of side entryways on our left and right. Zeus and Molly went right and I approached the one on my left. That entry way was only about 3 bunns long. Its edges were rounded off and smooth and it led into a cavernous chamber. The dirt floor extended into it. I shone my headlight all around and pulled out my flashlight. The place appeared empty and again I could not see any sharp edges or angles anywhere. I stood in the entry way and didn't dare go any further and only stretched as much as I could to get a better look. Coming out of the wall were some tall, cylindrical shapes. Imagine a long, cylindrical pill, the kind that hoomins take, sliced in half lengthwise and emptied. Now imagine the shell of this pill being very, very thick. I presumed they were covered with the same layer of minerals like the rest of this place. One was different though. The furthest one to my right was smaller, appeared to be be complete and covered with something light. That substance was coming out the wall, above the pill and seemed to grow around it. Then it hit me. It was the artery tissue!
"Zeus, Molly, have a look here, please.", I radioed. After they hopped over and stared at it for a while, Zeus looked at me and said, "Do you think this is what I think it is?"
"Yeah, if we put our paws on it it'll expose what's inside it!"
"Ok, let's check on the rover first though, it's just sitting there draining its batteries." said Zeus. 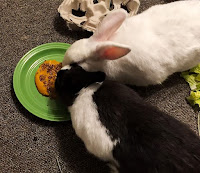 Mr. Toes and Abby
We turned and hopped off toward the rover, stuck in one of these entryways. When we got to it we saw that there were 4 entry ways. The one the rover fell in, one straight above and the 2 on the sides. The rover was resting on something huge and smooth. The mass was sloping a little bit away and toward the inside of the chamber. Zeus jumped in and tried to lift and push up the rover. We pulled on it and we had it out of the hole. We went in after him.
Zeus looked around, slowly lighting the chamber with all of his lights and our flashlights. This chamber was almost entirely filled with something, but under our feet was the same, hard, packed dirt as everywhere else. It still smelled the same, damp and scented with the mix of so many critters. We decided to crawl into it to see if there was another way out of it. It looked like it was leading to more chambers as if it were a mirror image of the structure above us. 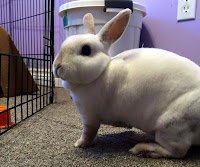 Suzy
We backed out slowly, turned around and returned to the spot where the rover went in. The we simply got up and out on the 'floor' and carried on to the end of the tube. We passed a couple of more entry ways but didn't bother looking in. 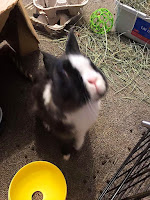 Mr. Toes
At the end we found a single large chamber half filled with whatever was under our feet. The place was round and much larger. I think it was as wide as the passage in the pipe we just came through plus the width of 2 chambers. Maybe a hoomin could fit here and even stand up.
Straight ahead of us was something familiar and at the same time foreboding. Remember those dark spots in the artery, that opened up when we put our paws on them? We were looking at something similar, but this one was very dark, almost black, and enormous. The dark colored circle seemed to take up most of the area and it looked like it was blending with the rest of the tube.
After I got done gaping and recovered some of my senses, I stepped forward and got close to it. I was less than a paw's length away from it. I stretched my paw and tried to touch it. My paw went straight in and through. I felt some slight tingling on my digits. When I tried to wiggle and move my paw in there, I felt no resistance of any kind.
Slowly withdrawing my paw I looked at Molly and Zeus. We looked at my paw as I turned and wiggled it. It appeared to be fine, the tingling was gone. What would happen if I stepped inside ... just inside ...
Credits:
- Renee: taking care of critters, photography
- Mr. Bun, Ijon Thichy The Nth: story
- Mrs. Angie: editing

Follow Suzy, Molly, Abby Mr. Toes, Frankie, Freddie, Mila, Izzie, Zeus and Bruno on FB
On Instagram @dollyalittledisabledrabbit
Visit our About the Disapprovers page to learn more about the cast members and catch up on older episodes!
Posted by Mister Bun at 3:00 AM