The Disapprovers - As You Think So You Move

Last Week on the Disapprovers: The Disapprovers agree to explore a strange substance the discovered at the end of an underground object. Mr. Toes volunteers to step into it and becomes overwhelmed by the completely unknow environment and its properties.
For the moment, I decided to focus on my breath and the image of Abby in my mind. It gave me a sense of purpose and the illusion of being in control of the situation. When the 3 minutes are up, Zeus will pull me out. I had to believe that. I was going to stick to our plan. I tried to relax as much as I could, because my face hurt from tensing up and my eyelids stung from their vise-like grip on my eyeballs.

Abby
I imagined Abby resting by the entrance to our tunnel in the yard. She seemed to doze. Wait, I thought they were keeping a watch! In that picture, the sun was out and I could hear the birds raising a ruckus. Next to her sat Bruno, awake, but grooming himself instead of looking out for dingoes and ocelots. Was it a moving picture I made up? I tried to imagine getting closer to Abby and shoving my head under her side. She was so warm and soothing, and her fur felt so real. But just as I thought I had nestled in, she sat up startled and started cleaning her side. I noticed Bruno sit up straight, as if he had sensed danger.
Instinctively, I backed away a little. Abby looked distraught and vigilant, with a very puzzled look on her face. She squinted her eyes and thumped. She did not lay down again. I'd hoped we could nose bonk, but she didn't budge. Was my imagination failing me too? All this was just in my imagination, wasn't it? The loud birds sung on unabated, but I can't recall trying to imagine any birds or their songs. I only tried to picture moving to Abby's other side to snuggle again. She jumped again and then scooted over a little.
The scene became quite still, except for the incessant cardinals in the tree. I looked up at them. What they lacked in numbers they made up for in verve. Their tiny, red bodies clashed with the dark, blue sky so much, that they tricked me into seeing thin, black borders around them where the red touched the blue. The tree, on the other hand, was getting ready for some well deserved winter rest, shedding its leaves and glistening in the high sun. Its naked branches seemed to cut up the sky like lightning. The day was so clear that when I looked straight up, the crystal blue sky wanted to turn black. And then, for no reason, I binkied. Hard enough to make Schrödinger proud. Because when a bun binkies hard enough, just for a second, it's impossible to tell if the bun is a bun or a pretzel.
The strange thing was, I could feel the imaginary binky in my body, right where I was. I could feel the cold air on my whiskers and I had to squint a little in the bright sun light. I had created and held a pretty convincing mental image before, but this took it to a whole new level. I mean, I was still in this...., mystery goop, wasn't I? Or did I pass out, did I start hallucinating, or..., worse... 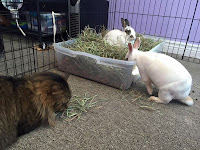 Bruno, Molly and Suzy
It was time to open my eyes and try to look around again. The imagined scene started fading as the darkness of my suspension took over. But now..., I could see something! It wasn't much. Just a little light outline of my body. It looked like it was glowing just a tiny bit. Around me floated some glowing, thick, hairy yarn.
It was growing out of my glowing torso and paws. When I tried to shake one off, it just rippled and waved. Some of them were fading into the dark. Some were rolled up into a small tumbleweed in the center of this place. If you think the tumbleweed gave off more light than individual strands, it didn't. Its light was as muted as the rest of the yarn strands. When I tried to touch some of the yarn, my paw went right through it. 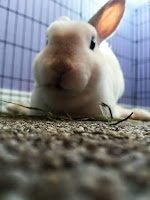 Suzy
Looking down (I thought it might be down) toward my hind paws, then up to see if there was a top or a bottom to this place, I couldn't make out any boundaries. It was still very dark here and the ambient light was extremely weak. I realized I was moving when I tried to direct my sight somewhere. Looking down felt like turning down too. My body seemed to follow my focus. I concentrated on one of those floating strands of yarn and I floated toward it.
If I willed myself to turn around and move, would I get back to the spot I entered through? Maybe I could grab that darn tether.
I checked my watch again. It was definitely busted and showed only 2 seconds had passed. 2 seconds. Right. 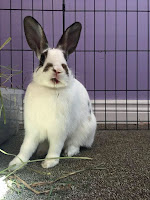 Molly
Turning my head back and looking behind me I saw the tether and I tried to follow it along. I kept moving. I really kept moving! It was hard to tell if this place really was bigger on the inside. I had never seen it from the outside. It simply felt like I had to drift for a long time before I got to the boundary with the outside. Then as quickly as I had entered, I exited.
Out of the goop and sprawled out I was looking up at Molly and Zeus. They looked extremely concerned.
"Are you ok?!?" asked Molly." 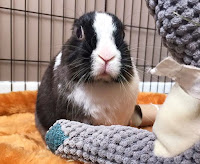 Mr. Toes
I..., I'm not sure. I'm feeling kind of sick to my stomach."
Rolling over onto my side, I decided to wait before attempting to get up. Maybe my gut would settle down if I let myself rest? "Zeus, why didn't you try to pull me out after 3 minutes?" I asked.
"You've been gone for just a moment. We're talking seconds!." said Zeus. "You went in and you came out. I think we lost your signal when you disappeared, so it's a good thing you came out. Good thinking. No sense wondering about with broken com, right?"
"He's back, he seems to be ok." radioed Molly.
"Seconds?!?" I said.
"Yeah, what a bummer. I'm a little concerned by your radio going out though. Sorry you didn't get to explore much, Major."
Credits:
- Renee: taking care of critters, photography
- Mr. Bun, Ijon Thichy The Nth: story
- Mrs. Angie: editing

A time dilation tunnel? *digs for Lorentz transform homework* Not sure what these little buns have gotten themselves into, but isn't sweet that Mr. Toes can rely on thoughts of his hunny bunny to keep him calm in a crisis? :)=
-Jen (Kohl's mom)

So cute to see the rapid with the same as my name. It is so lovely!

they are sooooo cute﻿!