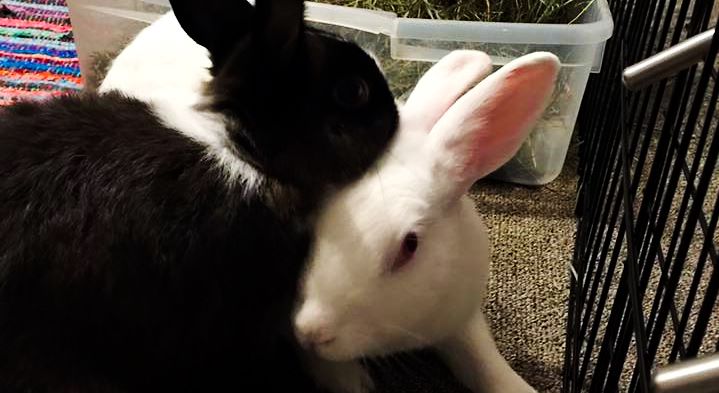 "Ready!" said Molly.
"Zeus, we'll start the clock on your mark, you'll have 5 minutes out, 5 back and 5 for 'spillage'" said Suzy.
"Wilco, 5 out, back and spillage." replied Zeus.
"Molly, back up a little, I'll get in there and we need to let it close. I need to see if this thing will open from the inside." said Zeus. Molly stepped back and Zeus got inside the "artery", very slowly and carefully. They were both clear of the "arterial wall" and in a moment the opening closed.
"Can anybunny hear me?" asked Zeus and they heard him on the radio, but Molly heard nothing coming through the wall.
"Loud and clear, only through the radio." said Molly.
"Right, I'll put my paws on it to see if it opens." said Zeus.
Molly stared at the spot where she hoped Zeus would make an opening and show his smiley little face. The moment seem to go on forever. Finally, a little opening begun to show and grew a little. There was Zeus, grinning!

Molly and Suzy
Molly got closer, put her paws on the edges of the opening and watched it dilate. She stuck her head in and looked around. Then she put one front paw in and let it rest on the bottom. Then the other paw and she was half way in. Zeus made some room for her and she got all in.
"Start the clock." announced Zeus as the opening closed. Molly's heart sped up, she started hyperventilating. She stopped for a moment, slightly shut her eyes and focused on her breathing, slowing it down. She felt the tension in her hind paws and relaxed them. She tried to note the pauses between her breaths. She felt the pressure around her eyes drop. Zeus looked at her and stopped.

Abby and Mr. Toes
As they walked, a faint bluish green glow from above followed them. Overhead, the artery was glowing a little bit. After a while, Zeus started looking up at that bioluminescence as if to make sure it was still there. He realized it gave the surrounding a little warmer and safer feeling. That realization settled on him slowly and he picked up his pace. Molly kept up with him.

Abby
They moved in the direction they saw the opossum move and Zeus kept looking around for the spot where they thought the little critter disappeared. There were no obvious signs of where he or she stood last. There was just one of those darker indentation in the surface of the "artery", at right about Molly's eye level.
"Zeus, this looks familiar, doesn't it?" said Molly staring at the indent.
"Yeah, there's one like that where we've made our little entryway. We also saw them on the video from the rover before we lost contact with it, remember?", said Zeus.
"Let's try it, shall we?" asked Molly getting ready to place her paws on the indent.
"Go for it." said Zeus and Molly sat up on her hind paws and placed her front ones on the indent.
We waited and watched the image from Zeus's and Molly's body cams. Since they have not moved very far, the video feed continued to be clear. 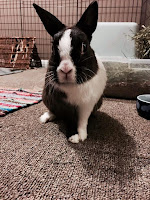 Mr. Toes
We saw Molly press her paws against the surface when the "artery" reacted and opened up. Very slowly, she got her face close to the opening and looked inside, her headlight created a ghostly atmosphere.
"Wow, that looks like what you're in right now." said Freddie.
"Stay out of it, please. When the round rover gets back, we can send it down there." said Suzy.
"Wilco! Let's move on." said Zeus.
They kept moving on and now the "artery" started to turn and slope down a little bit. As they walked, the video showed the slope getting a little steeper.
"How's your footing? Is it slippery there?" asked Freddie.
"It's very dry, I don't see or feel any moisture under my feet." said Zeus.
"Not slippery at all." said Molly.
The slope kept going down at a steady angle and they wanted to cover as much ground as they could, knowing they'll have to turn back very shortly. The artery continued with no end in sight.
Credits:
- Renee: taking care of critters, photography
- Mr. Bun, Ijon Thichy The Nth: story
- Mrs. Angie: editing

Arteries are like that. But there ought to be a treat shop here and there along the way.