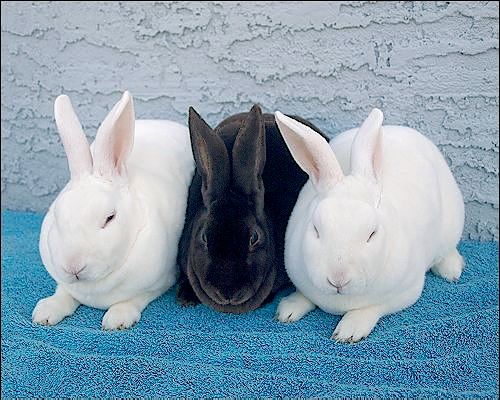 "Guys, we forgot the murder hornets!"
"No, we didn't; they were postponed until next month."
"Do you mean the 'October Surprise?' I thought that was Bunzilla."

PS: A little bit about Maya, Mira and Moonglow,


BORN: 2013
WEIGHT: 4lbs each
BREED: Mini Rex
COLOR: Brown / White
GENDER: Spayed females
LITTER BOX HABITS: Good
NOTES: It's been years since these guys started looking for their forever home. They are still waiting for half a chance to steal your heart.

Maya, Mira and Moonglow are part of a litter of eight beautiful Rex babies rescued after they were dumped in a park at only a few weeks of age. All eight thankfully responded well to the care they received at BHRR and are now flourishing. These three girls and two of their brothers (Mango and Macadamia) still reside at the shelter (three of their brothers have been adopted) where they are some of our favorite bunnies to spend time with! Mira (brown) is the “big sister” and she likes to keep her little sisters in line…but sometimes little sisters like to defy their big sisters and when that happens it’s hilarious. When the girls are being precocious they are snuggled in close and grooming, snuggling and sleeping in a perfect pile of Rex bunnies.
BHRR: http://bhrabbitrescue.org


The BHRR fundraiser is still going and is over the 3K mark.

Fundraiser: https://www.gofundme.com/brambleyhedgerabbitrescue
Posted by Mister Bun at 7:22 AM