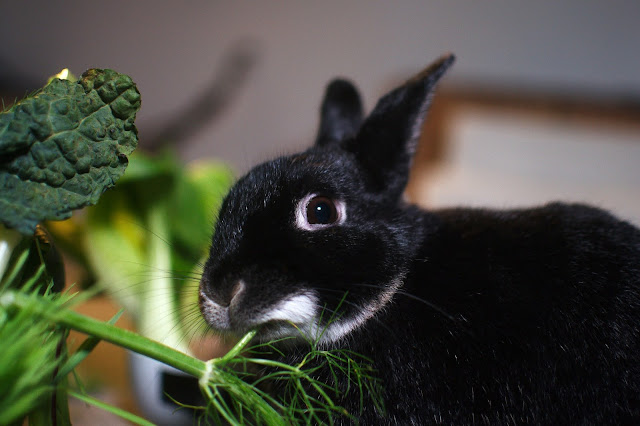 At second number one, Charlie is lounging by the gate, sprawled out, with her tucks out. At second number two, she's withdrawn, balled up, ignores a fresh salaaaaad garden, doesn't care about the raspberries. At second number three, she takes her medicine with little fuss. After a blink of an eternity, she hears the treat bag and runs around like mad, giddy for a bite.

At second number four, or a day later, Espresso is threatening to bite the hoomin holding out a treat. He's pushing away the blades of wheatgrass placed in front of his nose. He's a feisty one. He'll fight the syringe if it's the last thing he'll ever do.

Another blink of an eye goes by, and halfway through the night, some pellets are missing from his bowl. The greens look disturbed. Espresso is loafing, tucks out, a puzzled look on his mouf, "Hey, why are you up in the middle of the night?"

Cancel the mental note to get the carrier ready, to call the vet. Throttle back the dread that this one will take us to the emergency clinic. All of the next second is for sleep. Leave the wreckage of the night as far behind as possible. Another second is just around the corner.

Oh those dreads, those worries, yikes ... best of luck too all there..

... I think they conspired, back to back, one night after another. But we caught it right there so the disaster had no chance to progress.