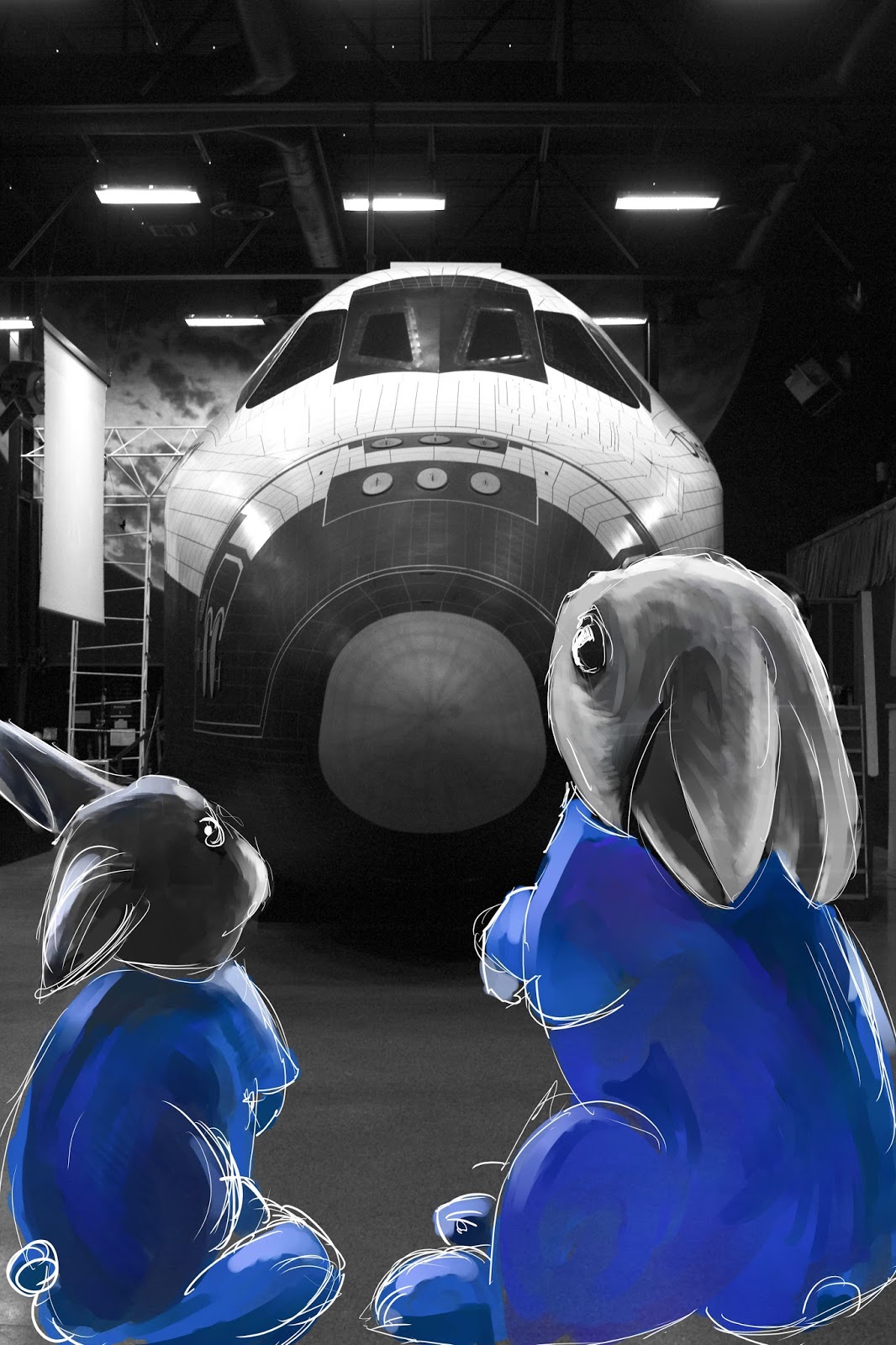 The mockup resembled the head of a beast. It looked like a giant fish head rather than a spacecraft. What had happened to the rest of this fish? I moved forward, partly with apprehension, partly with confidence. I followed Abby as she marched in front of me. I gave the giant fish head credit for my anxiety and Abby for all of my false sense of security. I asked myself, "How did we end up in this mess?" It was my friend at the Department of Theoretical Archeo-Engineering that had talked me into volunteering for this experiment. Part of me felt like I've seen all of this before, and part of me couldn't quite figure out which way was up and which was east or west.

Mr. Toes climbing to his station
The simulator had an elongated nose, rounded off, not very sharp, but not blunt either. At the very top of this "head" was the flight deck with several windows, two of which almost focused forward, so the mockup appeared to be staring at us all the time. My confusion grew since the object seemed to me both familiar and strange. Abby stopped in place, and I almost tumbled over her. She was looking at the ... face of that ... three-story-high creature.
For a moment, I regretted my decision to go along with this experiment, yet I was certain I wouldn't be able to get out of it now. When my friend had asked me for help, I thought nothing of it. What would be the worst that could happen? I would probably kill a couple of weekends reading some very important papers, and that would be it. I learned later that the engineers and students from the Aerospace Cathedral were involved too, almost on a dare. They were just morbidly curious to see if they could build what the historians contrived.
The historians wondered, quite seriously, if certain types of mythical creatures could develop space-faring capabilities. With the help of several departments, they had constructed the speculative prototype staring us in the face. I stood there for a moment, gaping at the awkward contraption, while Abby resumed marching toward it.
We ingressed through a round opening on the port side of the simulator into something of a spacious room. I guess it could serve as the crew quarters or a storage space. I could see how this could be used for scientific experiments and such. I'll never forget my first day at that sim and the time I saw how the historians and engineers designed the bathroom. Maybe they were running low on funding, or maybe somebun was a real comedian. We may never know. The space latrine was built into a tall locker. When I looked inside, I saw a pretty standard space litter bin. The only trouble was that it was designed to accommodate pellets the size of my head. That gave me pause. Were those mythical spacefarers at least partially modeled on horses? Somebun seemed full of it indeed.

Abby climbing to commander's station
Close to the aft bulkhead of this room were two aluminum ladders, one on each side of the room, leading up to the flight deck on the second level. Space was tight, and moving through the opening to the deck was awkward. I had gotten better at it over time, but I had not learned to be graceful.
Abby was already strapped into the commander's seat, checklist in paw, starting about her routine. I tried to pick up my pace and ended up knocking my head on the seat, or maybe on the overhead switch panels. It never failed—the faster I tried to move, the slower I went. Eventually, I found myself sitting in the pilot's seat, strapped in, with the headset on.
We would try to go through the normal approach and landing profile. This strange bird required about thirty degrees of nose down pitch attitude during the approach. That's pretty darn steep! It had no engine, so it could only glide. Well, it glided about as well as a frying pan.
When it was Abby's turn to fly, my job was pretty simple. Run the checklists, throw a few switches, arm the landing gear deployment, drop the wheels, and then arm and deploy the drag chute once we were on the ground. I would watch and monitor other flight parameters and talk to the controllers, but that was pretty much it. My job was to make Abby look good, so it was like a day off at home.

Mr. Toes in the pilot's seat
The sim supervisor started the session, and all was going well. I just never got used to how the simple things were done here. To lower the landing gear, I had to first arm the system by punching in a numeric code on a keypad, and then I had to enter another command to do the actual landing gear extension. It was a real head scratcher. We were doing fine, and Abby kept the vehicle on the glide slope in a right descending turn. She rolled out from the turn exactly on the extended centerline of the long runway. It was quite unnerving to watch us diving for the ground. How many hours of practice would it take to get used to this perspective?
Abby had called for the gear extension, and I hit the "execute" button on the keypad. Nothing happened. I punched in "4", then "2", then the "execute" key again. Same thing—nothing happened, and we had no landing gear. But Abby didn't skip a beat. She did a few gentle "S" turns to bleed off some of the extra energy we carried. Even though this was a sim, my noggin forgot all about it and thought it was the real thing. I started to feel uneasy.
I armed the drogue parachute for deployment and waited. We were coming in hot, and we floated quite a bit down the runway before the belly of the craft made contact with the tarmac. The second that happened, I dumped the chute, but it failed to deploy. We had no chute to slow us down. Abby did her best to control the craft with the rudder for as long as possible. Eventually, we would grind to a halt, even if we had to take out some shrubs and palmetto bushes past the end of the runway.
But we kept on going without slowing down one bit. I saw the markers by the side of the runway showing how much of it was left as we whizzed by them at an alarming speed. Instinctively, my feet tried to hit the brakes, but of course, there were none. The end of the runway approached, and we went past it and into the rough terrain. We kept on going.

Mr. Toes, reflecting in the PFD
That's when things turned scary. Instead of a rough ground in front of us, I began to see a dark blue horizon, hazy and far away from us, as if we were looking at the sea. Suddenly, the ground ended, and we flew off a cliff. The craft pitched nose-down again, and I was staring at a dark, misty beach by a raging ocean below. My paws started to tingle, and the fur all over my body bristled. My front paws froze in cold cramps, and my body lifted off the seat. I felt the pressure of the safety harness holding me in place. The white caps on the waves below grew rapidly. My gut felt sick, and goosebumps were crawling up and down my stiff neck. The impact was here.
I jumped. I jumped, and I then was sitting on my pad, panting. Outside, the bright sun was in full command of the day. It was a while before I felt my heart rate return to normal. I tried to wipe my mouf. My hind paws felt so wobbly that I thought I would topple over. I heard Abby gallop into the room.
"Are you OK?" she asked.
"I hope so. I dreamed about that sim of hoomin spacecraft again," I said.
Abby sat up, distraught. My nightmares about the hoomins were starting to get to her.
Credits:
- Renee: taking care of critters, photography
- Mr. Bun, Ijon Thichy The Nth: story
- Mrs. Angie: editing

Follow the Characters of X Plus Bun on FB
On Instagram @dollyalittledisabledrabbit
Visit our About X Plus Bun page to learn more about the cast members and catch up on other stories!
Posted by Mister Bun at 1:06 PM