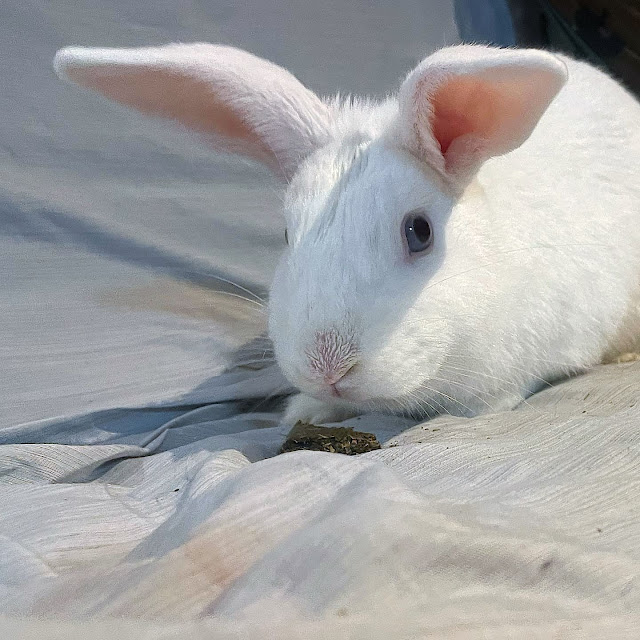 No, I don't dip cookies in THAT, I dip 'em in a carrotini. And where is my carrotini!?

PS: Blue-eyed Henry is looking for his forever home.

Posted by Mister Bun at 6:30 AM No comments: 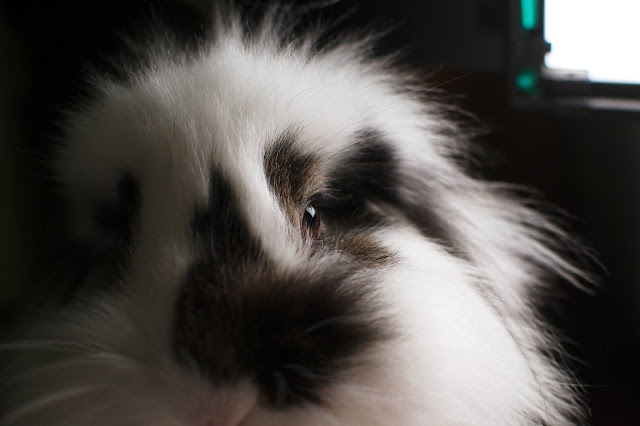 We can do it easy way or the hard way, hoomin! One last time - where did you hide the cawwots!?

PS: Our hoomin met Cutie Pie and her husbun, Little Guy, (rescues from the Georgia House Rabbit Society) last week. We have a connection to them via all the extra willow and kudzu leaves in our snacks and salads.

So we like to give Cutie's hoomin a plug since she has an Etsy store with all those goodies. There are the willow, kudzu and toys for buns. The stuff is as bunny-tested as it gets.

The store is here: https://www.etsy.com/shop/lilysbunnytreats/ 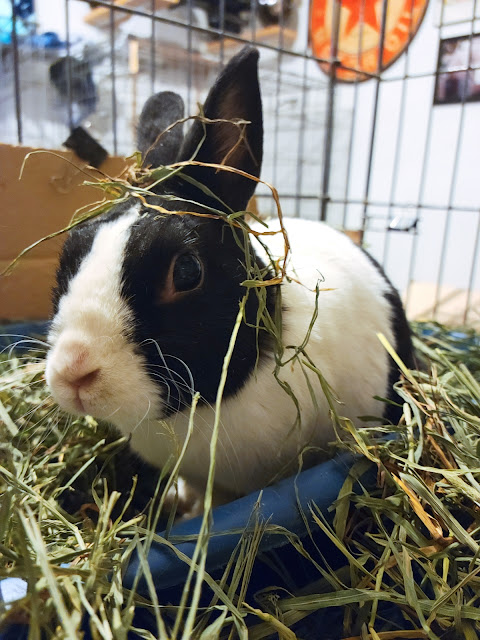 Why, yes! There will be cawwots and no M*nd*ys when I get done digging to the other side!

PS: Lula is a  rescue that won the lotto and now enjoys the bun life with Ken, Kaci, and The Desset Warren <3

We're trying to take it pretty easy today. It only took a couple of sleepless nights for my hoomin to fold toward the end of the week, and we're still trying to get the wings level. It's going to be an early night for everybunny.

The new girl eats like a champ, inhales hale, devours greens, and poops like a pro. No bun could ask for more.

We're still not sure what the color of her fur is. For the moment, it's that of a helpless bun dumped somewhere and left to fend for bunself in the infernal Florida sun, with a tinge of brown. We suspect she might be a shade between Inconel and titanium, a lucky gray. Burnished and darkened by her exposure to hoomin nature. Maybe we can help her heal some of that.

Another good thing that happened last week was that our hoomins got to meet a couple of rescue buns and their hoomins. There was a lot of picture taking, and we'll have more on that next week. 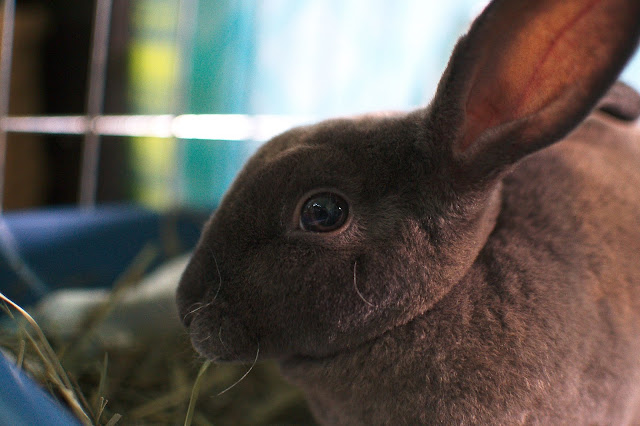 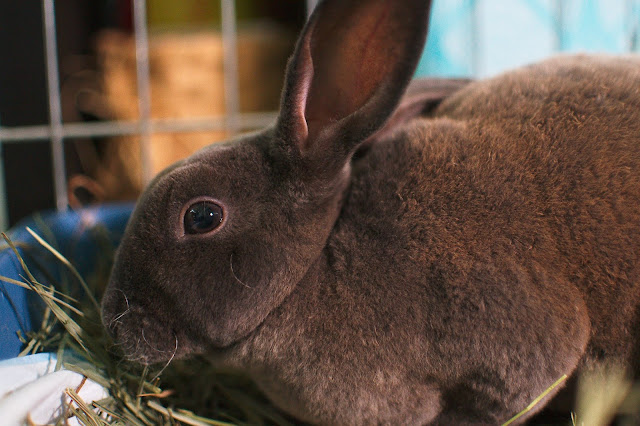 Something strange is going on since yesterday. I think my hoomin finally snapped. I heard him talk to somebun I couldn't see. There's a funny smell coming from the kitchen, and it's not the stench of burned water for tea.

We have a rescue in the house. My hoomin named her Rheya, after one of the characters in "Solaris" by Lem. She came from a pound in Sarasota, where today, she was supposed to get "pruned from the timeline."

Now she's a foster. She still needs her special operation. We don't know how old she is or if she's still growing. Yesterday she clocked in at an under whopping three pounds. But, she seems to be in good spirits - eats hay like a madbun. Last night she inhaled her first dinner salad - cleaned the bowl.

The official line right now is that she's looking for her forever home. Only time will show how that's going to work out. 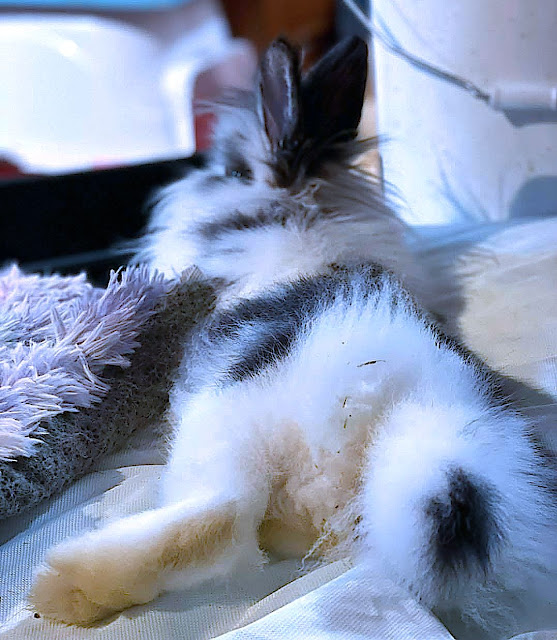 Donno, talk to the foot! And be careful - there's a fine line between "listen" and "thump."

- Thank you, Chris, and SCHRR!

PS: Aaaaah, yes - Lyla - the double winner for this week. She will be looking for a forever home soon. 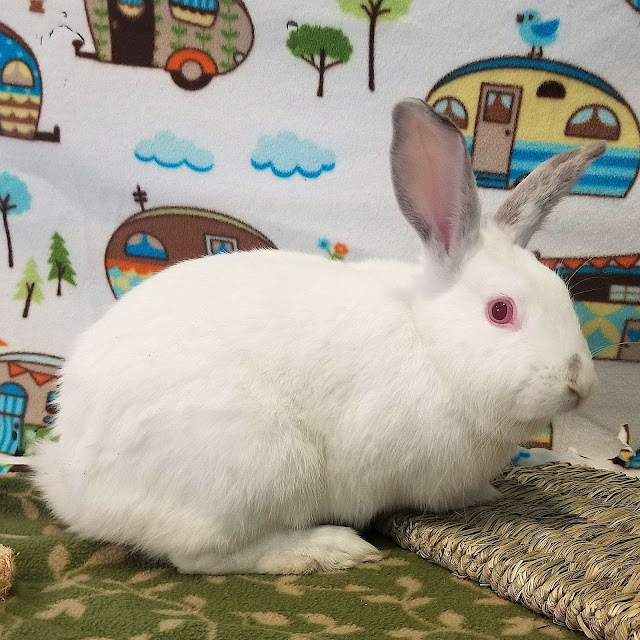 Who? Me? Runaway camping and make a long weekend out of it? What gives you that idea!?

PS: Somehow, Skye is still looking for his forever home. You can learn more about him here: https://bhrabbitrescue.org/skye/

The BHRR fundraiser is still going on and is over the 3k mark! :-)
BHRR: http://bhrabbitrescue.org
Fundraiser: https://www.gofundme.com/brambleyhedgerabbitrescu
Posted by Mister Bun at 6:24 AM 1 comment: