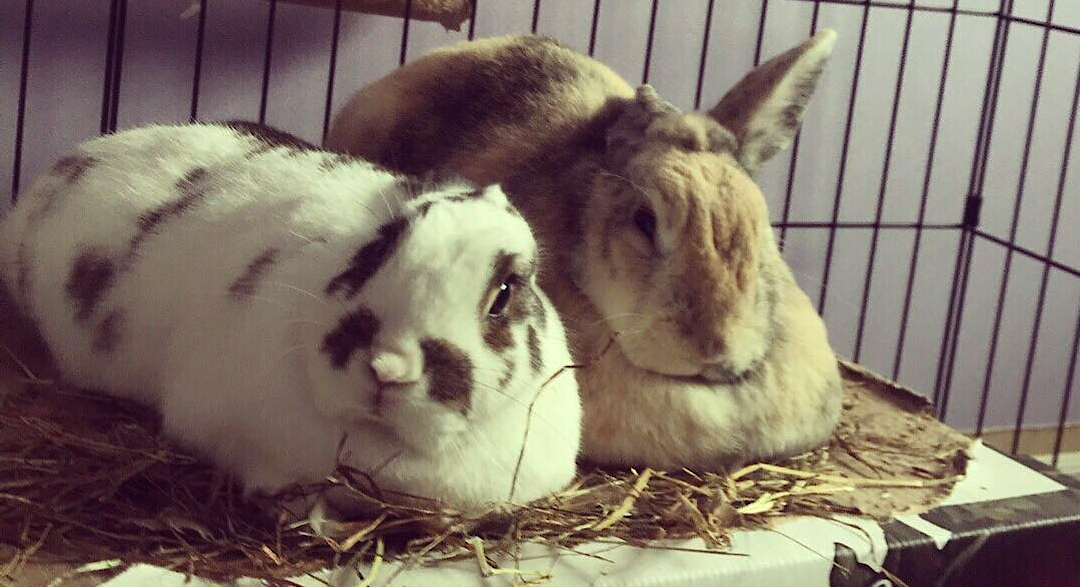 Pancake got up right after the sun broke into the house around five in the morning. Once the rays warmed her back and wouldn't stop teasing her eyelids, no amount of willpower could help her pretend she was still asleep. She sat up on her pad and listened. The house was quiet, except for somebun making noise with the dishes. The hoomins were snoozing; they never got up this early on the weekends. 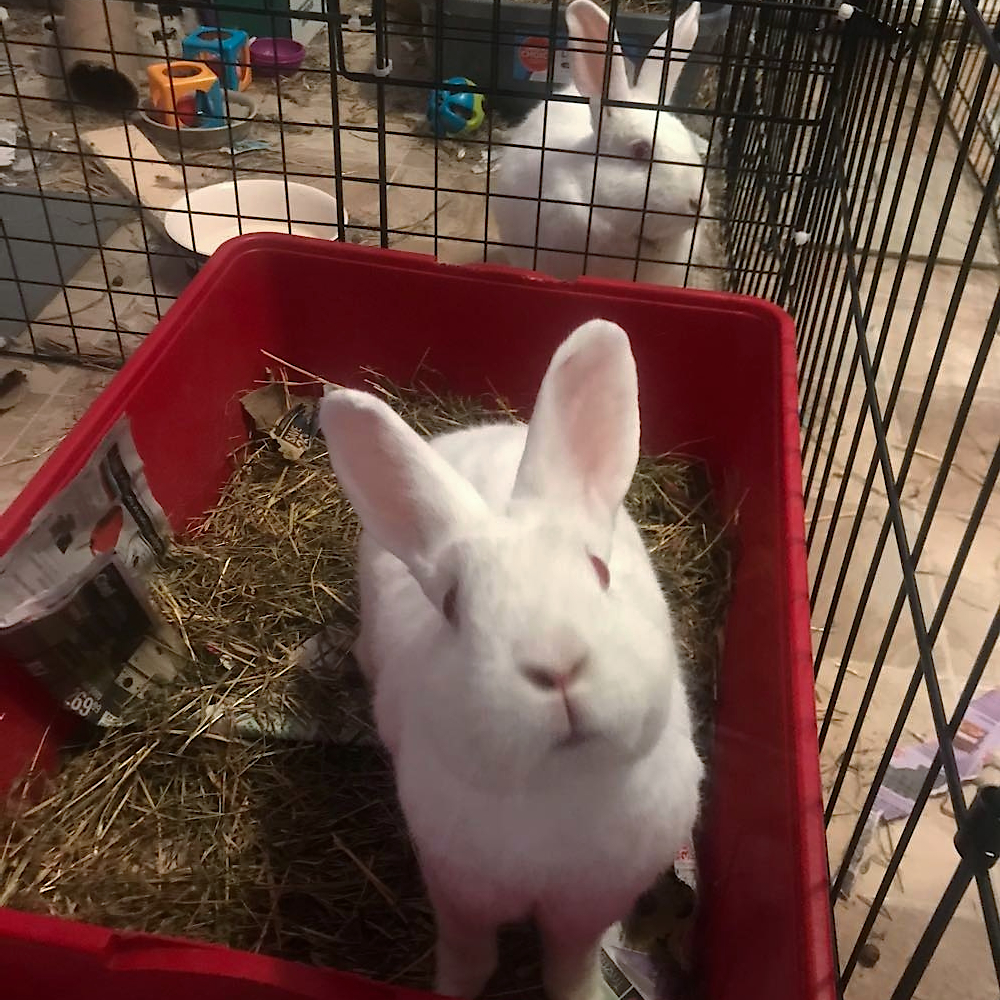 Joey
After a short stop at the bin, she hopped toward the commotion. She sped up and launched into the air, shaking her head, wiggling her torso, and kicking her feet. For a split second, she floated through the air as a bun and a wave. Pancake landed sideways and almost crashed into Joey and Molly. They had the breakfast noms under control. Fresh cawwot juice, fruit, and alfalfa waited to be devoured. No bun could ask for more.
She grabbed a ripe raspberry and bit it in half with relish. The juice splattered everywhere and ran down her mouf as Joey and Molly watched in surprise. "What is she on about now?" thought Joey. 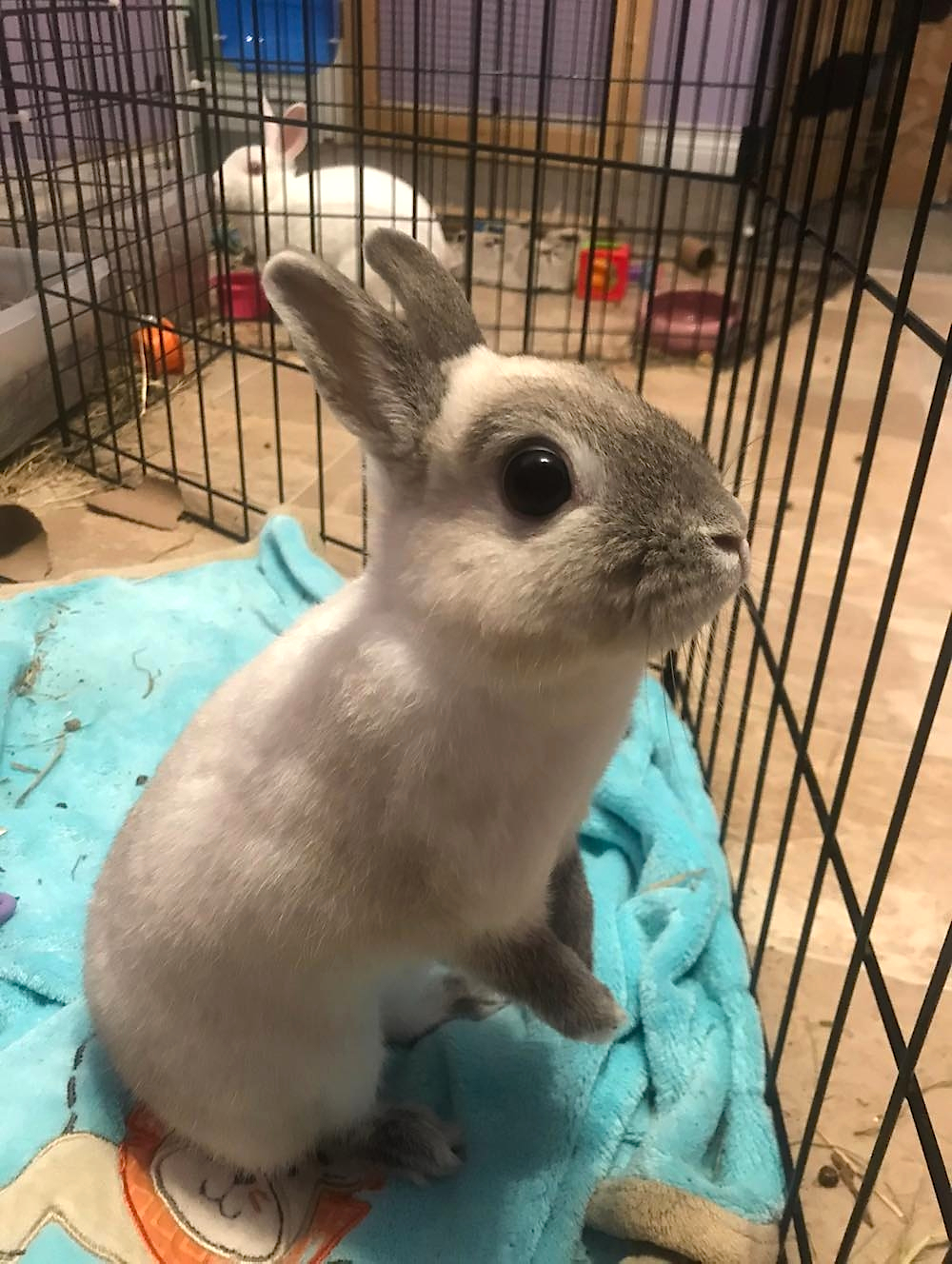 Penny and Joey
"So, what's the latest with that scribe of ours?" murmured Pancake with a grin, and a shiver ran down her body as if she was about to blast off again. "Well, good morning to you, too, Pancake. Ya really like my cooking, eh?" said Joey. Molly sat up and turned to face the sun, eyes closed as she tried to catch every ray of sunlight she could.
"There's very little news from the 'scribe,' "Joey cautioned. "He passed his written exam in January and has been reading textbooks for his next exam since then. The last I heard, he was starting to read the book of regulations and was about to start preparing lesson plans for future students. His instructor told him to get three of them ready for their next meeting," said Joey as he took a bite of alfalfa. 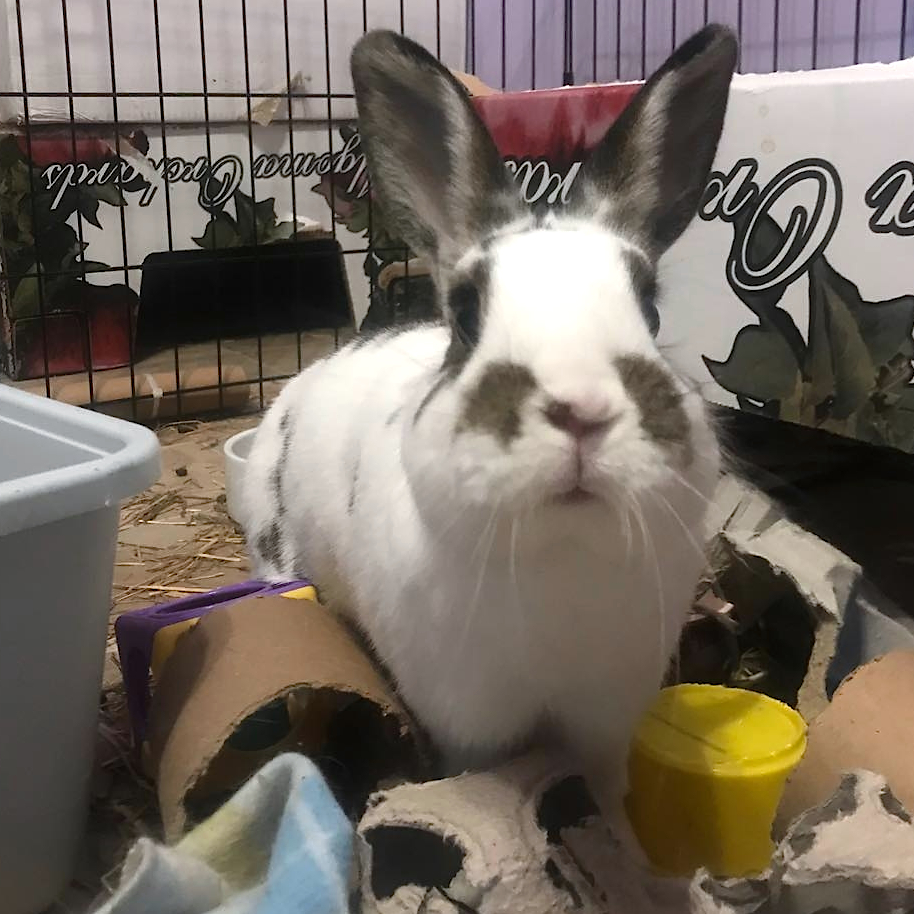 Molly
Pancake chuckled. "Do you have that on paper somewhere, Joey, or did it all come to you through that mysterious connection you have with him? I'm not sure I'm willing to trust that mind-melding of yours or those 'talks' you have with him. I like paper; give me a ticker tape or something. I want to get my teeth into it. Do you get what I mean, Joey?"
"That's all I've got," said Joey, and his eyes dropped a little. Pancake started to muse. "Look here, Joey. When we finished the last story a year ago, we were supposed to take a vacation. The next episode was supposed to give an idea about what kind of world we would live in. But here we are, in the middle of another summer, getting baked, languishing in that limbo between the worlds that may or may not come to pass. At this rate, it looks to me as if we don't have a clue when he's going to get done with that 'instructor adventure' of his, do we? Maybe by Christmas, maybe by next spring or even summer? We don't know, eh?" She closed her eyes and turned toward the sun. 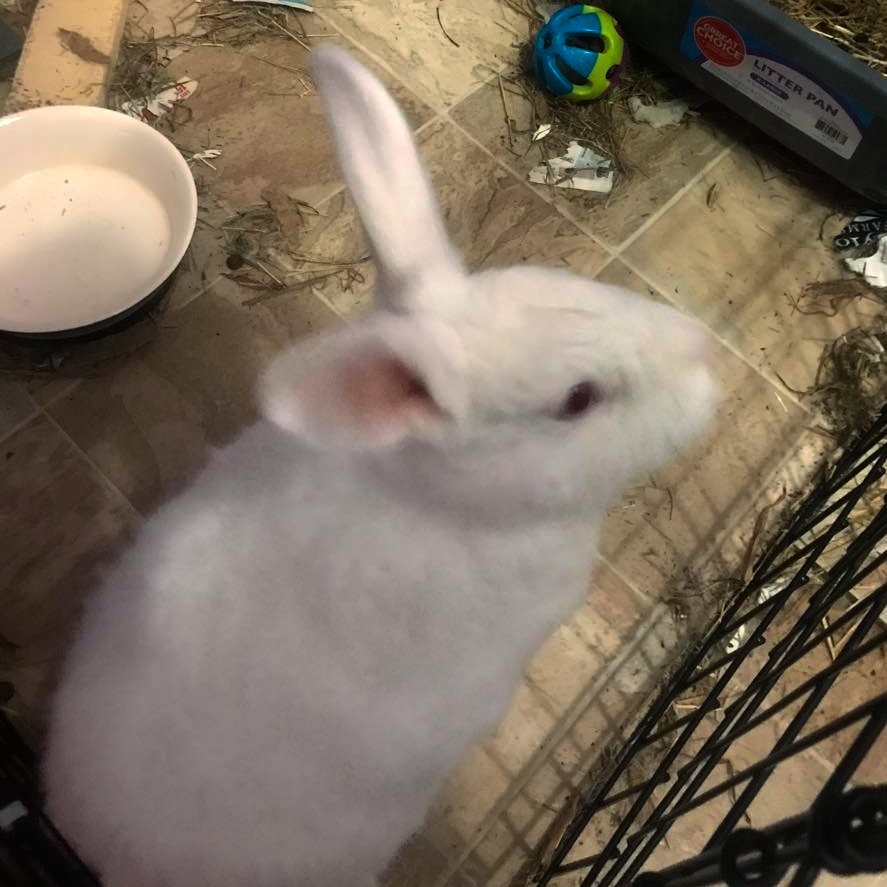 Joey
"Don't forget this update. How long did this take? A week, two? Bun only knows. And the stories he's been sneaking into the notebook late at night when no bunny's watching," chimed in Molly.
Joey looked toward where the Pleiades ought to be, cleared his throat, and went on: "I'm picking up a lot of trepidation there. Fear of this or that—apprehension." Joey paused for a moment. 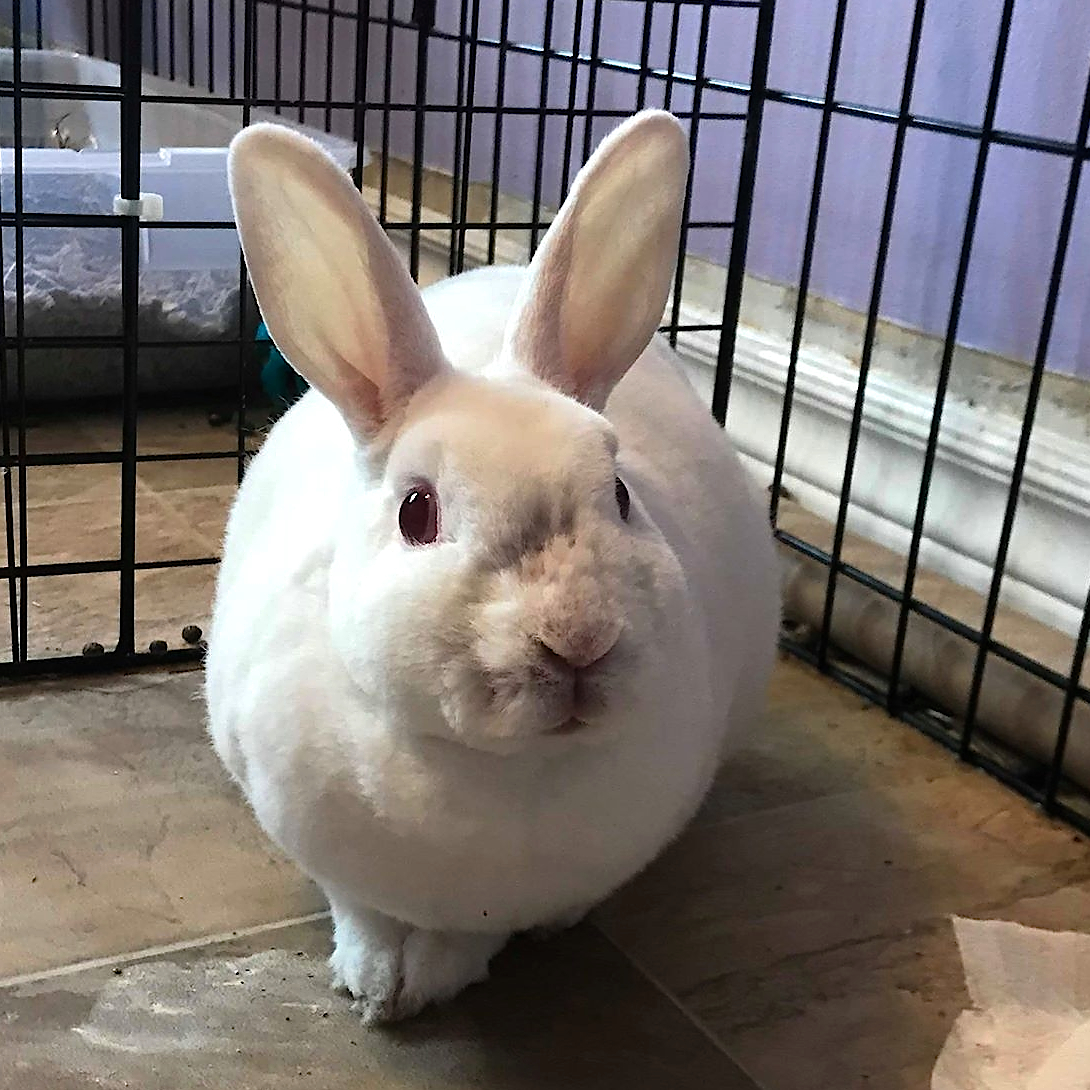 Ava
"Imagine, if you will, that you think you know where you want to go. You try to sense, through the heavy fog of doubt, where your true place is, the one you feel in your gut is right, the one that gives you relief from feeling like an impostor. You look for guidance, but all you have is a compass you don't trust. The compass gets swayed by a heavy bag around your neck, filled with ferrous and ferocious fears, uncertainties, ideas of how thing are that just aren't so. And the compass goes wild, points here one second then swings and points to the left or the right, or even back to where you came from. You try to put one foot in front of the other, but one foot is snarled in the ho-hum of 'normal,' everyday life, as the other tries to get a toehold in the imaginable." Joey sighed despondently and again turned toward the sun.
For a while, no bun said a word. Joey took out a half-burnt catnip stogie and lit it up. "Weren't you supposed to quit that?" asked Molly, a bit too loudly when she heard the crackle of the stogie lighting up. Joey nodded, "Yeah, there's supposed to be a whole story about that. Also, one about me visiting my elementary school." 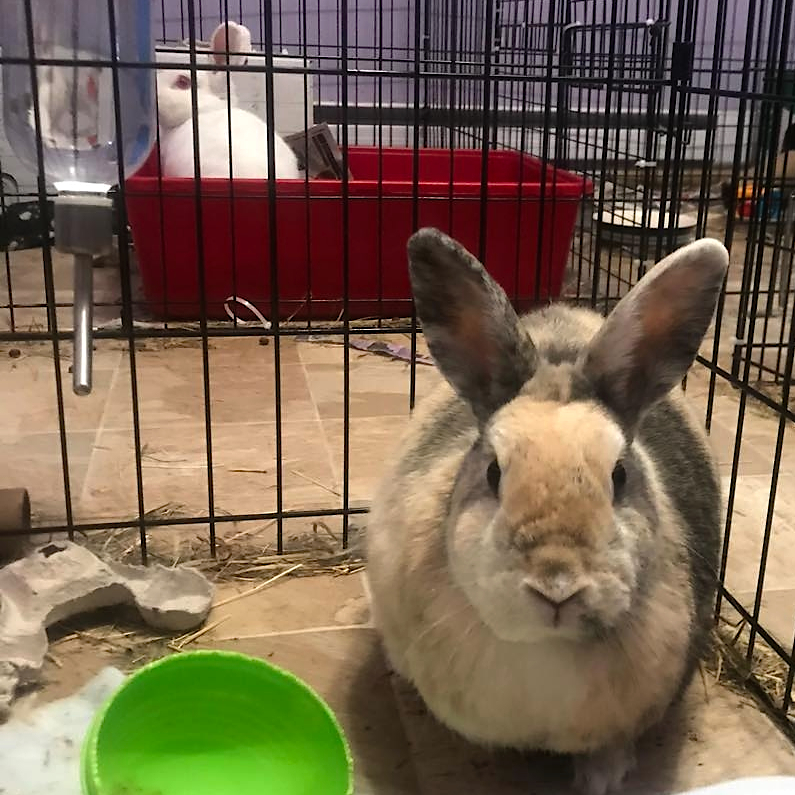 Pancake
"See what I mean? Because that story will never come out – Joey here – will never quit those bloody, stinking stogies and will die from lung cancer!" exclaimed Pancake as she shook her head. She turned toward the doorway and threw over her shoulder, "We'll just have to hold on for a bit longer, I guess. I'll wake up the rest of the crew before the hoomins get up."
Maybe her feet slipped when she pushed off too hard, or maybe she meant to foot-flick Joey and Molly or the scribe.
Credits:
- Renee: taking care of critters, photography
- Mr. Bun, Ijon Thichy The Nth: story, illustration
- Mrs. Angie: editing

Follow the Characters of X Plus Bun on FB
On Instagram @dollyalittledisabledrabbit
The "Star Bun" page: Still working on that one ;-)
Posted by Mister Bun at 7:07 AM

Well, of course she just slipped. The the paragraph that begins with "Imagine," well, Emerson wants to remind you that there are places where "no man has gone before," but there are also places where everyone goes at regular intervals. We are probably not meant to stay there too long, but it must be experienced. For us Lifeforms in this Universe it is like the speed of light. It is just one of those things or maybe it is a place, a place where you learn, a place where you face fears, a place where you decide on the next step. It is not a graveyard for lost ships. That's not what it is for.

Emerson also wants to know if the Scribe (lots of congrats on all the accomplishments by the way) knows about the Intrepid Museum in New York. It has the Enterprise and all kinds of other cool stuff. The Warren just watched a KLRU/ our PBS station show called "Museum Access" all about it.