The Disapprovers - The Bust, pt. 1

Last Week on the Disapprovers: The team makes last minute preparations for the bust. They stock supplies, practice retrieving critters from cages and hope to catch up on sleep. Suddenly, their plans change, and they are forced to commence the bust sooner than expected.
When I started to wake up, I knew it was Molly who poked me in the side. I heard the words she was saying; I understood them, yet nothing made sense to me. She wants me to suit up for what? And where exactly are we going? It can't be the lab because we're not going in for a couple more nights. My eyes burned with protest. "What do you mean? What happened?" I mumbled. I started to get a hunch about the origins of this ruckus; I just didn't feel like believing my intuition. "Get your stuff, Major, and head for the basement. Zeus will explain everything" added Molly. "Oh, he better," I thought. 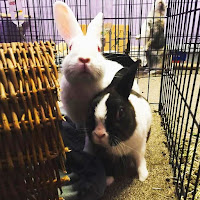 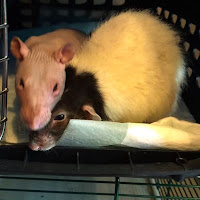 Freddie & Frankie
We were all groggy, but adrenaline was kicking in, making us a bit jittery. Zeus was busy with equipment, so Molly gave the speech. "The bust is taking place tonight. We intercepted communication saying the lab was about to be liquidated. We think the doctor got wind of the upcoming raid by the feds. Frankie and Freddie are trying to alert our federal frenemies to the new development and are preparing for the release of information to the press. They are also trying to get hold of the sysadmin." Molly finished and tried to rub off, with both paws, the sleepiness on her face. Zeus turned to us and said, "We just can't wait. Freddie and Frankie will go into the sysadmin office to take down the security system. We need to give them a minute. I got my friend to help us, as well. You never met him, but he's a very nice guy. We have no choice and are very short-pawed. We'll meet him in the wreck, by Singularia. Any questions? Cuss now or forever hold your peace." No bunn slurred a word.
After the longest few seconds of silence, Zeus and Izzy climbed into the pot belly stove and pulled in our packs and supplies, which were strung on a line. We helped them by lifting the packs and feeding them into the stove. We heard the frantic ratties' footsteps on the stairs. Freddie and Frankie were rushing to follow us. As they approached the stove, Frankie yelled that they couldn't get hold of the admin and got into the stove. 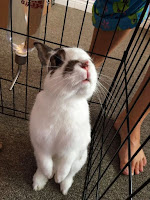 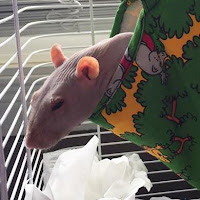 Freddie
Freddie and Frankie went on to the sysadmin's office at the lab; we got out of Singularia at the wreckage. Along with supplies, there was a large pile of something, covered with a tarp. I lifted a corner of it to have a look. I saw toys, plush animals, a whole bundle of them in a nylon net. "Zeus, is this ours?" I asked. "Yeah" replied Zeus, as he marched toward Singularia and said, "I'll be right back," then crawled into it and disappeared. As soon as he vanished, two little, ratty moufs started to poke out from Singularia. One of them was Zeus, but we didn't recognize the other. They climbed out, and Zeus said, "Everybunny, this my friend, Lincoln! He will be helping us with the evacuation. Mostly, he will shadow me."
I knew I could trust Zeus, and if he said this guy was OK, he probably was, but I still felt apprehensive about it. Then again, what choice did we have? We needed every paw we could get. My doubts must have done something to my face, because Abby ribbed me and gave me a serious "Cut it out!" look. I sighed. I always say she's a better bunn than me. 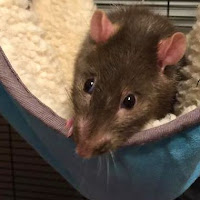 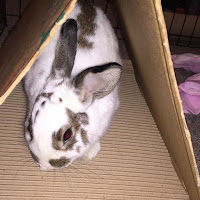 Molly
We kept waiting for the "all clear" sign from Freddie and Frankie. I was still trying to wake up. The dim, overhead glow of the Singularia "tissue" did not help; as part of me wanted to nod off. The wait dragged on, so I just stretched out on the ground and rested my eyes. The dirt smelled musty and felt damp and cool. I wished it was a patch of summer grass, warm from the sun, succulent and fresh smelling, with insects buzzing overhead. I thought I was there, and the buzzing seemed so real. I thought a bee tried to land on my ear, and I kept flicking my ear to shoosh it away. It wouldn't go away, and it was now pecking at my ear. I woke up, and there was Abby, whispering, "It's time to go, come on!" Right, I would have to do this waking up thing all over again. This time, my body came back to reality much faster. Anxiety flooded my cells. Who needs kofey when you're on an adventure like ours?
We crowded back into Singularia and came out in the supplies closet at the lab without any trouble. Frankie and Freddie were there already. Once they were done in the sysadmin's office, they unscrewed the covers of the air conditioning duct and moved through it to the main room in the lab. 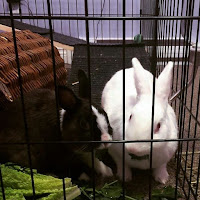 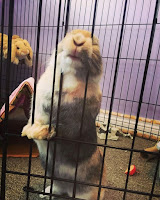 Pancake
The first thing that hit me was the smell of a rancid mop and cleaning chemicals, a sickening combination of rot and soap. The closet was completely dark; we could only see a vertical sliver of dim light coming through the tiny gap between the door and the doorframe. Abby pushed on the door. It was locked. We all pushed on the door. It didn't budge. Abby remembered to turn her headlight on and looked up at the door handle. We pulled out some rope, tied a loop and tossed it over the handle. "Zeus, it's all yours," said Molly. Zeus climbed the rope, twisted the little locking knob, and secured the rope around the handle so we could pull on it. We pulled on the rope, and once we heard the lock release, we pushed on the door. It swung open, and we were in. 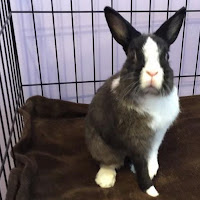 Mr. Toes
I remember talk of being able to smell the fear, and now I knew it was real. I was afraid I would breathe it in. Not that I could do anything about it. The feeling in my belleh warned me too late to ward it off; I just had to live with it. I was the last one getting out of the closet. Abby lead the way, and we slowly hopped toward the middle of the room. The dim light made the place look less jarring that I expected, but even more frightening as not every bunn was illuminated well. I was afraid of discovering horrors only when I was very close to a cage. The smell of ozone and denatured alcohol permeated the place. To keep the scene from overwhelming me I had to focus on the process, the minutia of every little step that was my responsibility.
Credits:
- Renee: taking care of critters, photography
- Mr. Bun, Ijon Thichy The Nth: story
- Mrs. Angie: editing

This on-going saga has certainly caused me to not take lightly "Things that go BUMP in the night."

It begs the question, were EBAs inspired by Pinky and the Brain, or is it a phenomenon that is very common, and hoomins were/are too clueless to have noticed until now?
-Jen (Kohl's mom)