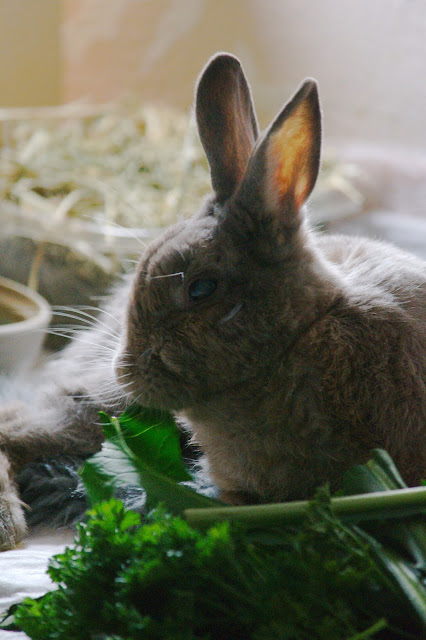 I had a nice week of headrubs, treats and bunstruction. Hoomin called the vet yesterday about my nasal discharge with white goop in it and was told to pick up another bottle of Baytril; a week's worth. Sigh... more saucing it is then.

And this happened.
At the tar pits, one of hoomin's friends did some business travels. Let's call him Alex. Alex said (paraphrasing here) "Listen to this, hoomin. We were at  such and such for dinner one night  and I had a chance to have a dish that I'll never again have a chance to have. And because of your rabbit and 'all the rabbit stuff' you showed me, I opted for the fish."

Hoomin almost passed out. It's tempting to say "whoop-de-doo, big deal, so what?!?" But maybe it is a big deal - we never know who or how will be reached and affected when we spread the word and advocate for our bunneh overlords.

PS: About the pix, hoomin didn't feel like pestering me so snapped what he could when the moment was right. It's not much of a pix, but enough to use it a starter for something else ;-) We'll keep you posted.
Posted by Mister Bun at 8:55 AM

Well the photo is cute,sorry about the saucing it,xx Rachel

The picture is of the "classic" sort! (Take your medicine and yea for the "education"!)

See! Bunnies help hoomins to inspire other hoomins to be *better* hoomins and not select non-Kosher menu items :)= Hope you are much better very soon, Mr. Bun!
-Jen (Kohl's mom)

Mr. Bun, you get well. You are making the world a better place.

A very nice picture of a handsome bun. Good day to you, Mr Bun and human : ) Ken & Kaci