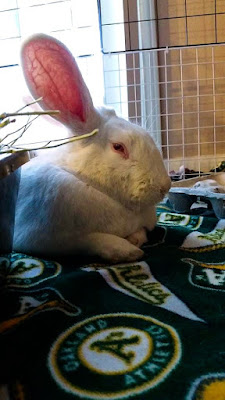 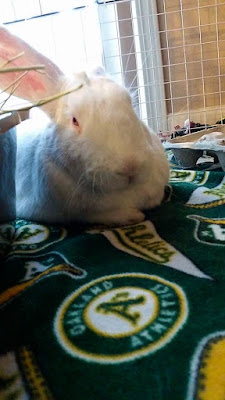 Angela says "He is the one who gets acupuncture on a weekly basis. He has to be the most disapproving bun out of all 6 fosters. (...) He has come a long way since July 17th. He is no longer flinging when he is pet. And he loves eating treats from people's hands now. This was after a week of being in our house."

PS: Kramer got grabbed by the ears and tossed into a carrier by the rescue personnel which contributed to medical problems. We're still glad fire-fighters got to him and got him out.

This concludes our little, impromptu mini-series on Angela's fosters. I'm sure we'll hear about how the bunch is recovering and we'll keep everyone posted :-)

Even we don't get grabbed by the ears and tossed in the Tar Pits. Thankfully.

(No, we get the "scenic route" along the well-worn path lined with inspirational signage - like "A Carrot or more a day keeps the V.E.T. away"

Scarey to go through all that,xx Rachel

Ouch! By his ears?? No wonder he disapproves. But bunny acupuncture is fabulous, so he'll certainly recover quickly :)=
-Jen (Kohl's mom)

Well, keep increasing his treats. That's sure to work.

Disapprove until you feel better, bunny. This disapprove some more : ) We are so sorry to hear what happened and hope for the best and send healing vibes for bunnies and humans Ken & Kaci