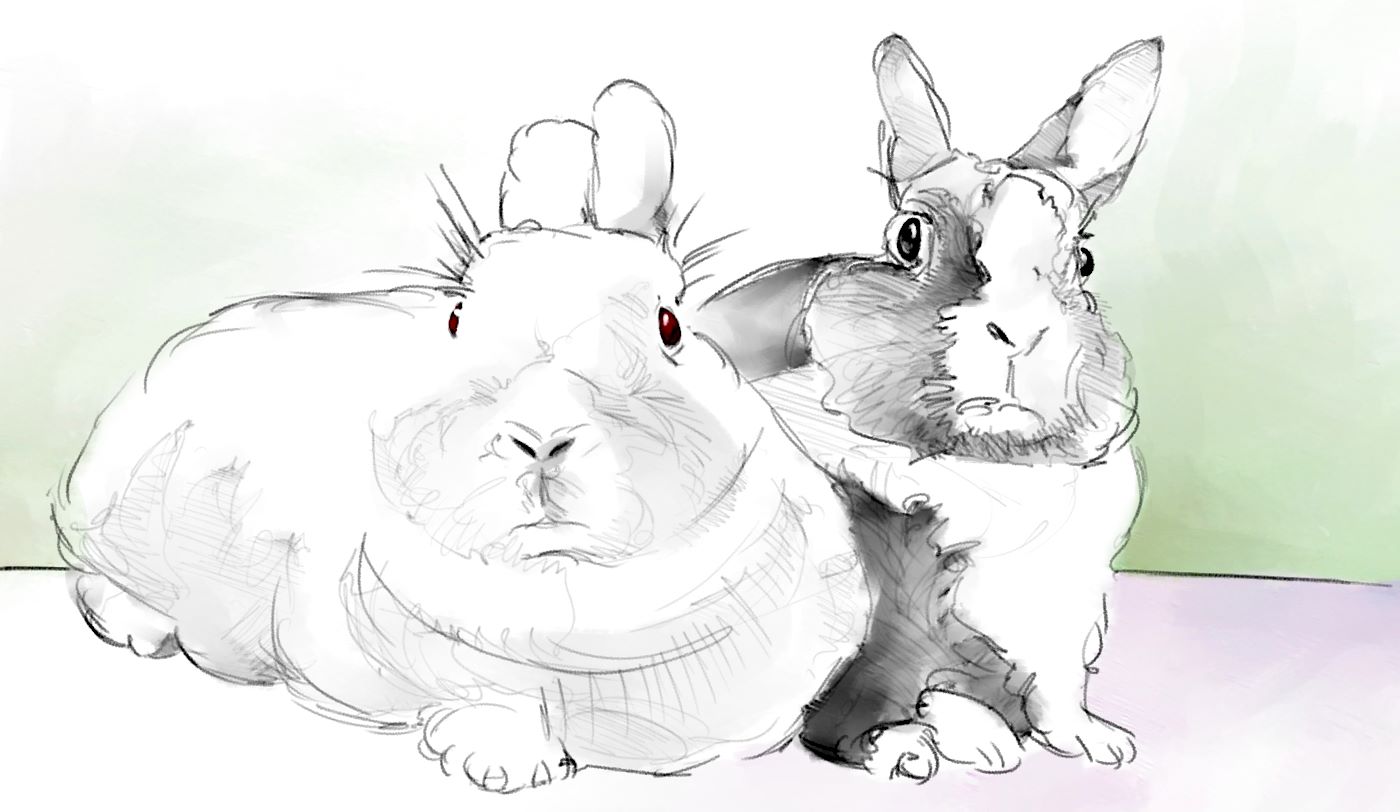 Author's Note: Last week, Zoomer and Mr. Toes had a busy day on orbit. They deployed a science experiment designed by a group of young bunletts and Zoomer performed a docking exercise with their original booster. After the maneuver, they discovered they are not able to release the booster. We join them as they are waiting for answers from the Center.
We floated still for a moment, stunned by what we had heard. Zoomer looked at me in disbelief, perhaps expecting me to have an explanation for what was going on, no matter what the center said. My head swirled with confusion. I had a hunch that we had a bigger problem on our paws than the malfunctioning booster.
"This is not exactly out of the book, is it?" Zoomer wondered quietly.
"How do you think those books get written?" I asked.

Zoomer at the console
Zoomer got on the console and started looking through the logs. "Pay attention to the times when we were asleep, please," I said. Zoomer raised her eyebrows at me. "Center, what did you do when we weren't watching?" I asked the Cap Com, trying to sound sweet and coy as if I had caught red-handed a couple of pranksters in the act.
"Red Hop One, standby, we are looking into this," responded Cap Com, genuinely puzzled. "Zoomer, that first night I couldn't sleep, I heard them talking about deploying updates without notifying the crews," I said.
"I don't see any activities in the logs, only the usual telemetry, but nothing out of the ordinary," said Zoomer without taking her eyes off the console.
"I don't think they touched anything here, but I'm not that sure about the booster," I mumbled.
"Major, I think we need to prep for the orbit," said Zoomer.
"Are you thinking or commanding?" I snapped.
"Suit up Major, I will configure the ship for deorbit!" said Zoomer, still sounding shaky. I smiled at her and kept motioning with my right paw for her to keep going. "Major, get the suits ready now!" growled Zoomer from her gut. It still came out awkward, but she meant it.
I dove toward the storage lockers on the floor to get out our suits. The electric motor in the pilot's couch announced the changing of its configuration. I waited for it to come down and lock in place. That allowed me to get our suits above it so Zoomer could lower the commander's couch. I got her suit out of its protective bag while she prepared for the burn. I hardly noticed the thrusters making the tiny adjustment to our attitude. Up by the forward facing windows, Zoomer worked the joystick like a true professional and wasted no fuel. She didn't have to correct her adjustments. Next, I stowed that little bunlett's science experiment and secured it in a locker. Cleaning any floating rubbish came next. Whatever got stuck to the air filters went into the trash bin. I looked like a busy space maid, but the chores gave me something simple to do and freed me up to process our current situation. Some electric motor came to life in the capsule, and it took me a second to realize it was the commander's couch changing into its landing position. 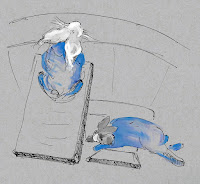 Zoomer at the console and Toes doing chores
"Major!" yelled Zoomer, "... the center is taking inventory of our consumables."
"Great, they are trying to figure out how long we can last here," I responded grimly.
"What if we killed our bio-telemetry?" giggled Zoomer.
"I would write you up for an exceptionally dark sense of humor, sort of like the blackest of black that you see outside," I said with the most deadpan mouf I could muster, but Zoomer wasn't looking.
After a while, she left the console and floated down to the couches, and we started prepping our suits. "Major, I did the final platform alignment and loaded the retrofire burn data, the center is verifying my numbers. We can leave here whenever we want to. The only thing we need to decide is where we want to land," announced Zoomer.
"Right! Sounds great, except we have that leech of a booster stuck to us," I whinged. 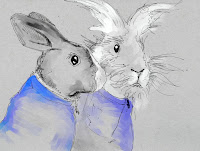 Mr. Toes & Zoomer
A call from the center put an end to our banter. "Red Hop One, we have some options for you." My paw tightened on the rim of my helmet while I buffed its clear bubble.
"Red Hop One, we recommend waiting eighteen hours until a maintenance probe can rendezvous with you to perform a disjunction on the booster," said the Cap Com. "Alternatively," he continued, "you could attempt a propulsive vent through the airlock to separate the two vehicles. Engineering calculated that you should be able to build up enough pressure in the capsule to carry out the maneuver."
"Stand by," I responded. 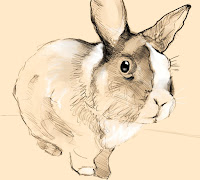 Mr. Toes
Zoomer looked up and to her right, and her lips were moving ever so slightly as she tried to digest the possible consequences of each option. The quiet in the capsule had an overwhelming feel to it. The atonal symphony of the little noises making up the ship's signs of life offered no comfort and only punctuated our time dripping away.
"If we try to blow out the booster, we'll be out of air, and it may not work," whispered Zoomer. I nodded in agreement. After another long pause, she added, "If the probe has to saw off the booster, we could re-enter with whatever is still attached to the docking collar. We could even do an EBA and pry off whatever we have to. I need your thoughts on this, Major. Do you agree?"
"Let's wait. We can always wait to get evacuated if we have to," I said. We told ground as much, and the wait was on.
Credits:
- Renee: taking care of critters, photography
- Mr. Bun, Ijon Thichy The Nth: story, illustration
- Mrs. Angie: editing

Follow the Characters of X Plus Bun on FB
On Instagram @dollyalittledisabledrabbit
Visit our About X Plus Bun page to learn more about the cast members and catch up on other stories!
Posted by Mister Bun at 12:22 PM

Pop up some more corn - the wait is on!