"Any updates?" I asked Pancake again. She had to be getting seriously irritated by my nervous queries, but she didn't show it. The atmospheric pressure was dropping, and the storm was still way out, but in my head, it was already here. I asked myself again why or how I ended up on an oceanographic research vessel anchored at Latitude 28.525054 North and Longitude -80.680129 West, and I didn't know. We were over one of the largest sandbars on the planet, and when the tide would get low enough, you could see the murky bottom. I looked at the space drill mounted in the middle of the drilling deck and wondered how they ever managed to get it here. It wasn't designed to operate in the 1 G environment of the planet at sea level. It had an exoskeleton rigged around it to support its weight. The deck was swarming with young bunletts, curious and giddy, proud for taking part in this assignment. They didn't mind giving up their summer break at the university; they didn't mind nor read the fine print. They didn't mind getting sworn into secrecy. I wondered if they comprehended what it meant? 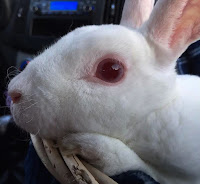 Ava
Every time the drill registered a strata sample, they poured over the monitor, scratched their heads, and argued. The bunletts were nervous and uneasy today. The sun would be setting soon and, in a few hours, we would be starting to feel the effects of the approaching storm. They would have to batten down the hatches to ride it out. The sea breeze felt good on my mouf, but it did nothing to soothe my anxiety. I had a death grip on the railing at my post, and I tried to do everything with the one free paw. Every time I had to let go of the railing, my gut freaked out. Every time I looked toward the darkening skies and the horizon in the East, I was afraid I would fall into it. I tried to look toward the West as much as I could.
We used the space drill to explore the mineral contents of comets, asteroids, and other celestial bodies. It could get samples from ice balls without causing any damage to them, and it could bore through solid iron like raspberry jam. One of those bunletts discovered strange traces of metal deposits when working on her assignment about the fauna and flora of this part of the planet.Her friends and her professor thought nothing of it at first. Maybe these were the remnants of a meteorite? But she thought to herself, "What the hay, let's see if those metal deposits affect the local echo system?" All was well until she dug up and held in her paws metal pieces with sharp edges and flat surfaces, pieces that looked machined. Next thing she knew, all the paperwork related to her discovery got sealed and disappeared from public access.

Bunletts at the screen
Now the drill is taking samples by cutting through the strata with cold plasma lasers and infuses the surroundings with nano sensors. The sensors communicate back detailed information about the composition of the surrounding material, and you can even get a three-dimensional model of it.
When the next core sample came up to the surface, mayhem broke out among the bunletts. They started yelling and motioning me to come over and have a look. That meant I would have to move my feet. I would have to let go of the railing! I took a deep breath and, in agony, shuffled toward them. 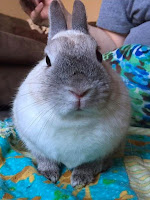 Penny
We were looking at the cylinder holding the core sample. Below the ordinary sediment was a thin layer of something ferrous that decomposed a very long time ago. It was followed by a layer of spongy silica and a thin remnant of some fiber material. Below that was a piece of bright, shiny metal. It could have been aluminum, but I wasn't sure. The bunletts were silent; one of them tapped at her screen when the nano-sensor data finally rendered into an image.
About a distance of fifty or seventy centimeters from the outer edge of the drill sample, several geometric forms were sharply defined. That was no work of any clever squid. A pair of trapezoid shapes were staring at us like the giant eyes of a beast from a different time dimension. Their edges were bent, and they were deformed, but at some point, they had to have been straight. I looked at the mineral composition data on the monitor. It showed that the broken pieces filling the frames were made of... aluminum silicate glass. 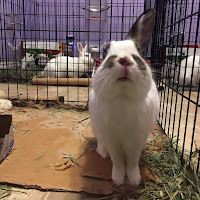 Molly
I felt the platform tilt under my feet, and my belleh felt queasy. It was not a seasick queasy, but an "Oh, holy mother of Bun!" queasy. I felt the platform dropping from under my feet, and I looked toward the East. The sky was almost black. It gleamed blue and purple and emerald.I had sensed it would swallow us shortly, and I started to fall toward it! I kept staring at the black and green wall getting closer and closer; it had a fuzzy white line at its top. A rogue wave? Here, in these shallow waters? The platform was gone from under my feet, and I was falling. Big, fat drops of water were smashing me in the mouf.
I jumped, not sure of where I was. My front paws were spread wide for stability, and I felt something soft underneath them. I was blinking, wanting to open my eyes and trying to keep them shut at the same time to keep out the bright, morning sunlight.

Mr. Toes and Abby
I looked up. Abby was staring at me, telescoping and holding onto the window frame with one paw. She held a watering can in the other paw and was trying to water hanging basil plants over our bed.
"What happened, did you have another ..." Abby started asking.
"I had another one of those dreams," I said.
"Was it the hoomins again?"
I nodded "yes" in resignation.
"Maybe you should go talk to somebun about that. I know you love your grandpa, but..." Abby didn't finish.

Mr. Toes
My great-grandpa to the Nth power would tell me "bedtime stories." One was about a crew making a deorbit flight. They died because their craft suffered a thermal protection breach in one of the wings. Why would he tell me something like that right before bedtime when I was tiny? I would tell a story like that because that's just me, but my great grandpa? That's no way to raise your little ones. As if that wasn't bad enough, he kept scaring us with stories about these mythical creatures called the "hoomins," who inhabited our planet long, long ago and kept us as pets. Some really sick fellers even talked about the hoomins getting off the planet and out into space. Some might still be out there. That's what he would tell us when we wanted nanners instead of hay for dinner: "Eat your hay or the hoomins will get you at night." I'll spare you the recipes.
Credits:
- Renee: taking care of critters, photography
- Mr. Bun, Ijon Thichy The Nth: story
- Mrs. Angie: editing