Penny leaned over me and wiped my visor one more time. In the seat to my right sat Pancake, all strapped in and waiting for Ava to finish her pressure checks. In front of me sat Chomp, a middle-aged pug, barely fitting into his suit, and his breathing sounded belabored on the intercom. Next to Chomp sat a young badger, Hack, the chief of the software division at StratoRivet. Abby was still on the flight deck, pacing and thumping from time to time. She didn't like what was about to happen any more than me. 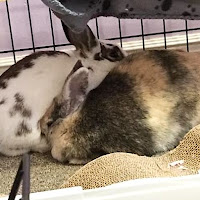 Molly & Pancake
By going on this flight, Chomp was calling our bluff and was trying to show the world that we were full of pellets, that our pilots and trainers were making stuff up. In their eyes, it was going to be their way or the highway and our feedback and ideas were good for stuffing where the thermometers go.
Hack was quiet. This flight was his idea. He was our only ally in their engineering office and, right now, he was sweating bullets too. I was gripping my restraints with such angst that my paws were starting to cramp.
I punched in a visual call to Molly onboard the salvage ship, the Buzzard, on orbit above us. She was all smiles and waved at me. I think she was noming some mint. It had crossed my mind that this could be the last time I'd see her. I forced a smile. She shook her head in disapproval. "You can smile better than that, Major!"
Once everybun cleared the flight deck and the vehicle got sealed, Flight Control resumed the launch countdown. 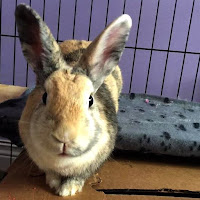 Pancake
"About damn time!" rasped Chomp, and he returned to his attempts at breathing. I wondered how he ever got cleared for this flight. Well, he's Chomp; he doesn't "have to" anything; doctors and clearances are for us, and never mind that Chomp can't fly a kite.
I felt the rumble of the main engines kicking in, and I glanced at Pancake. She was all business, her eyes on the instrumentation, her paw steady on the auxiliary abort handle. The display on my visor went into a launch frenzy and got my attention back. I was most concerned with the pressure readings around the new iris hatch, ironically located right above Chomp. It was that hatch that had led us to this flight. Chomp and his "yes-critters" insisted that we were installing the seal on the hatch incorrectly, that we were incompetent in operating it, and that our simulations were simply rubbish. Thus, StratoRivet installed the hatch on this vehicle.
No, they didn't have any data to back up their assertions. They had Chomp's raging, his foaming spittle, and that made every fart coming out of his mouth gospel. Only Hack realized there could be something to our claims, and he knew that an operational disaster would mean the end of their company and their careers, not to mention the most certain loss of innocent lives. 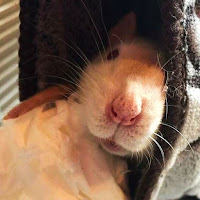 Sammy
"Launch Tower cleared," called out Sammy, our cop-com. There was no launch tower. There hasn't been one for, well, almost ever, but we called it out anyway. It's one of those superstitious, old routines that we kept alive for good luck. Nowadays, it means that the main engines are stable, and the initial liftoff is nominal. I felt heavier and heavier; my face muscles were trying to break away from the bone and slide off to the back of my helmet. The G's during acceleration while escaping the gravity of Mother Earth tried to crush me with a ton of force. My paw closed tight around one of my seat restraints.
We continued to accelerate and climb to a much higher orbit that's normally required for a routine test flight. Pancake and I decided that we wanted to be as close to the Buzzard as possible. We didn't bother explaining any of that to Chomp. Finally, the engines throttled back, I felt the pressure ease, and an uneasy silence filled the cabin. I gave it a moment and glanced at Pancake. She was just as puzzled as I was. The Iris hatch held. My stomach sank. Today was the first day that the bloody thing decided to work as designed! My mouf felt as dry as sawdust. In front of me, Chomp started to get out of his seat. He managed to undo his seat restraints and was trying to stand up in the seat. He turned himself around and faced us, holding onto his headrest. He did not have a happy grin on his mug. My legs started to shake. I expected Chomp to start his psychotic tirade any second now. "You know, Major, we never tried a simulated re-entry with this hatch, because it always blew off by now," said Pancake in a low voice.
The lunatic, Chomp, blasted off with his yapper like an old Soyuz rocket. Spittle started beading up on the insides of his visor; the drops combining into globs refracted the annunciator lights like raindrops off the windshield of a car at night. Pancake looked at me again and started searching for a tranquilizer charge in a pocket of her suit. She was about to come out of her seat.
The loud bang of an explosive decompression jolted my nerve endings and shot up my spine, followed by the noise of air getting sucked out of the cabin. Tremendous force lifted Chomp, and his head hit the rim of the opening where the hatch used to be. His face flashed with raw fear and he went limp. The umbilical connecting Chomp's suit to the life support system stretched, its innards snapped, and only the outside sheath held together and prevented Chomp from floating out into space.
Flight control went abuzz with activity; alarms were piercing ear drums and stinging retinas; Chomp was gently bouncing around the rim of the hatch, out cold and at peace at last. I felt numb and frozen in my seat, while Pancake, free of seatbelts, was by the hatch retrieving Chomp. She looked at his vitals display and gave the thumbs-up. He was getting colder but didn't give up the ghost quite yet. 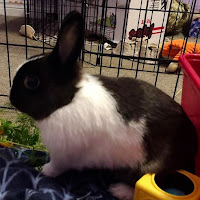 Mr. Toes
"Help me get him into the airlock!" said Pancake. The command snapped me out of my stupor, and I made a dash toward the back of the flight deck. I opened the lock and primed it for pressurization while Pancake dragged Chomp inside and connected his auxiliary valve to the life support system. "Get up there and rendezvous with the Buzzard!" directed Pancake. We closed the lock and pressurized it. I was still shaking, but I worked my way to the left front seat and plugged myself into the life support.
In the next few minutes, I forgot about everything around me. Routine training kicked in, and I worked the rendezvous procedure to dock with the Buzzard. Since Hack was somewhat familiar with the systems we were using, I handed him the checklist and put him to work. I made him follow me with the checklist and call out flight parameters. It gave him something to do, and I think he remembered how to breathe again. When I looked up, I saw stars, courtesy of the missing hatch. We were flying a space convertible.
Molly was ready for us, and Chomp got the medical care he needed. Zero gravity worked in his favor. We were able to examine the extent of his injuries without causing any further damage. The back of his helmet had a nasty gash and was almost cracked open. He was bruised, had a dislocated disk, and his left hind leg was almost broken, but he would be OK.
When Chomp came out of the coma, he learned that he would need an exceptional physical therapist -- and a lawyer. The board of directors had demanded criminal charges against him. StratoRivet learned to live with the fact that their existence hinged as much on cooperation with us, the flying grunts, as anything else.
Credits:
- Renee: taking care of critters, photography
- Mr. Bun, Ijon Thichy The Nth: story
- Mrs. Angie: editing

Oh you had me on the edge of my seat,xx Rachel

A flying catastrophe .. my word...

i was reading this really intently and didn't expect it to be so captivating. Such a well written story that i believe can be enjoyed by people of all ages