X Plus Bun - The Nutriberry Pie

Abby finished up in the lab and headed for the decontamination lock. When all of the lights turned green, the door opened with a hiss, and the outside air rushed in. She floated out slowly and made one final stop at her workstation. She put her hind paws into foot restraints and leaned over a small box mounted on a metal extension arm. She had to feed Amy, her pet ameba, before leaving for the night. She squeezed out a few drops of food from an eyedropper onto the dish and let the surface tension do the rest. 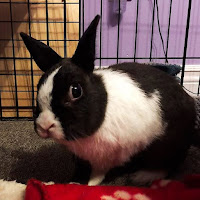 Mr. Toes
She headed for the greenhouse airlock, excited to see Mr. Toes again. She hasn't seen him since this morning, and that was way too long for her liking, stretching the limits of her patience. She flew down the length of the corridor, pretending to swim freestyle, then softly touched down on the closed glass doors. She checked the time. Mr. Toes was nowhere to be seen. He had the afternoon and evening off, and she wasn't sure what his plans were. She waited impatiently, floating from one side of the corridor to the other, trying to convince herself that she was not mad at him.
Then it hit her. He probably wasn't going to show up tonight, albeit he wasn't going to stand her up either. She hit the release sensor with a little extra vigor and a frown on her mouf. The door opened with a hiss, the air rushed into the airlock, carried her inside, and the door rapidly closed behind her. She hit another release button and again the pressurized air in the lock carried her out and into the greenhouse. This used to be a biohazard lab; she and Mr. Toes had converted it into a greenhouse. This section was located near the propulsion reactor, making it easy to keep it warm for the plants. They tried to grow a little bit of everything: some bitter greens, like arugula and radishes, and a lot of herbs. Mint did very well here, but the dill looked a little scary. For some reason, carrots looked more like beets, and their tops were wild and bushy.
Abby moved carefully, from one hydroponic rack to the next, as she stared intently through the thicket of greens surrounding her. She had to remind herself to stay focused and ignore the concentrated aroma of the greenery. She tried to peer through the mix of basil and vines of sweet peas. She got a hunch to head for the mint section. When she got close to it, she saw why her date hadn't shown up that night. 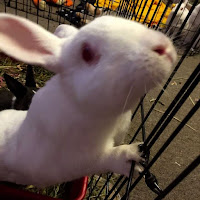 Abby
Mr. Toes was curled up sound asleep in the midsts of the mint forest. He had tethered himself to the water line and was snoring away, gritting his teeth gently from time to time. Abby got closer to his head and smelled his breath. Sure enough, his outbreath was minty fresh. She spotted one of the half-eaten stocks next to his head. It probably attacked him, and he had to – absolutely had to – eat it to teach the rest a lesson.
Abby gently tapped him on the nose, and Mr. Toes sprung awake, frantic, thumping and flailing with his hind paws the startled air around him, trying to run, his instincts oblivious to zero-gravity conditions. Abby put her paw on the back of his neck to calm him down and rubbed his head between the ears. He quickly returned to normal except his eyes stayed bugged out for an unnerving moment. Once he realized what had happened, he wiped his mouf with both paws and embarrassed, unclipped his tether from the water line.
"I'm sorry, Abby. I only wanted to check on the basil, and then I don't know what happened. I just got so sleepy." said Mr. Toes. 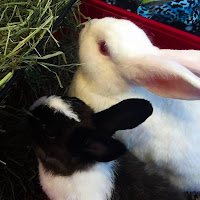 Mr. Toes & Abby
This was the fifth time that Abby had found him asleep in the greenhouse, but she didn't mind. Maybe that's what he needed these days. That little pat on his nose worked like magic every time.
Once Mr. Toes regained his composure, they drifted aft, toward the end of the greenhouse, where the crown jewel of their achievement sprawled out all over the bulkhead. The entire circular wall was covered with nutriberry shrubs. Growing flat and thick, like heather, the bushes were covered with small purple berries that turned deep red and vermillion when ripe. Mr. Toes and Abby stopped on the handle bars protruding from the bulkhead and admired the yummies in front of them. They remained motionless, watching the sunlight of an impending sunset take on a warm, amber glow, flooding sections of the garden, as the entire room turned on its axis with the rest of the craft like a rotisserie. 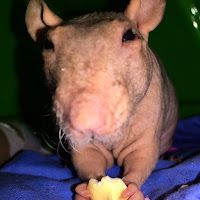 Freddie
Then Abby's heart skipped a beat. She leaned in closer to one of the branches and examined one of the berries getting ready to ripen. It had teeth marks; something had taken a bite out of it. Around the bite, beads of juice had formed, and the berry was slowly bleeding out. Abby looked at Mr. Toes with a mix of suspicion and bewilderment, but he only shook his head in denial. He was as shocked as she was. She looked at the teeth marks again. They looked sharp and fine; she knew they weren't from Mr. Toes' mouf. Maybe it was someone from the engineering crew? She would have to have a word with Freddie, but he just didn't seem like the kind of guy who would stoop to nomming unripened berries. Everyone knew they were growing the berries for a pie. Freddie even figured out how to bake the pie in the heat exchanger, the closest approximation to an old-fashioned oven they could devise on the ship.
"Abby, how about we put a camera in here?" said Mr. Toes. 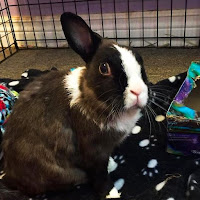 Mr. Toes
They came back in a few hours and installed a few "eyes" in the room. They even placed a panoramic, 360-degree camera right in the middle of the berry thicket. The next day, Abby and Mr. Toes realized there would be no nutriberry pie that season. In fact, they would have to dump the entire patch out of the airlock.
They watched the surveillance footage and gasped in horror when one unripened berry was devoured by her ripened neighbors.
Credits:
- Renee: taking care of critters, photography
- Mr. Bun, Ijon Thichy The Nth: story
- Mrs. Angie: editing

Erm, the berries were eating each other?! Have I got that right?

Oh! The berries were too close to the reactor! (Thanks, to da admin for dis stoopid hoomin!)

Anyway, great story. It made me imagine some kind of bunny HAL-9000! 🐰
Except I don't want to read about a computer doing "LIFE FUNCTIONS TERMINATED" on space bunnies, so forget about that!

But I liked the way the space-y stuff was integrated with the bunnies' story.

I love space-y sci-fi too!

And the most amazing part is that they do it all without opposable thumbs!