The Disapprovers - The Bun Stuff, Pt. 3 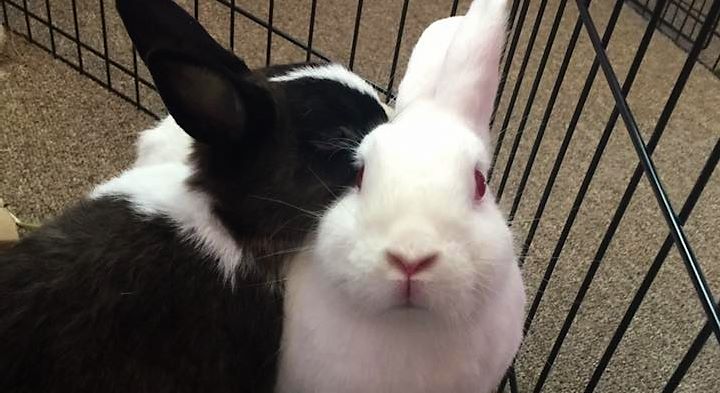 Last Week on the Disapprovers: Mr. Toes and Abby enjoy their visit to the International Space Station.
"Stop! Everybunny just stop!" said Pancake, jolting everybun to attention. She lowered her paw with the script and closed her eyes. She dropped the papers, put one paw on her side, and covered her eyes with the other. She looked exasperated. Pancake pulled her paw over her face and scratched the side of her cheek with a grimace suggesting she's about to go into a "Chris Kraft" type of rant. Instead, she stayed calm and asked loudly, "Who wrote this nonsense?" We were all silent, staring at her. I took off my headset. Out of the corner of my eye, I saw Freddie do the same. "This episode?" asked Molly. "No, last week's," responded Pancake. 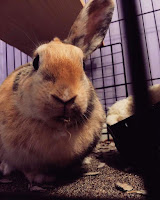 Pancake
She started pacing in circles. When she stopped, she put her paws on her sides and straightened up, "Well, it doesn't matter now. How do we fix it? Everybun, how do we work this problem?" I still had no idea what she was talking about. Suddenly, Freddie got up, threw his headset to the ground, and waddled off slowly, muttering, "I'm too old for this fertilizer, I need a drink."
I was flipping through the pages of last week's story but couldn't catch on to what she was complaining about. Pancake picked up the offending script and turned to the second page. " First, let's work the timeline. Mr. Toes and Abby are on orbit during the early morning hours, say two, maybe two thirty Eastern Standard Time. Shortly after, they work their way to the cupola and start to watch the sunset over the coast of West Africa..." 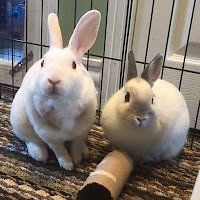 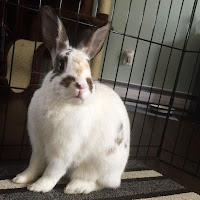 Molly
Then it hit me, and I felt my ears getting hot. Of course! I flopped over onto my back and gazed at the ceiling.
"Oh, you got it, Major?" giggled Pancake. She kept her cool. She was right; it was so obvious now. At that time, the west coast of Africa would be in the dark. They could never watch a sunset over there. Izzy caught on as well and started looking for ways to reconcile the plot. "I'm thinking just a ballpark location; they could watch the sunset somewhere close to Australia," said Molly as Izzy was nodding in agreement, without looking away from her laptop. 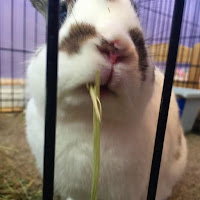 Molly
Freddie came back with beverages and handed everybun a jug and quipped, "Bottoms up, everybunny! This is epic!" He gulped down the fresh, raspberry grog. "Auckland, New Zealand!" blurted out Izzy. "They can watch a sunset over New Zealand and then Australia if they stay at the cupola long enough." "No, they can not." corrected Freddie. "Remember, the station is moving, so if they are watching a sunset, they are close to entering the shadow of the Earth, and they are mostly done watching anything. Australia is moving away from them. The next exciting thing they can watch is a sunrise, maybe someplace farther east.
"Well, somebunny make the edits then! Izzy, are you sure about the timeline?" asked Pancake. "Sure, boss!" replied Izzy. "So they could be watching lightning strikes if there were any storms over the water, right?" I asked. "Sounds plausible," confirmed Freddie. 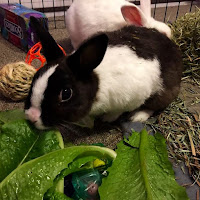 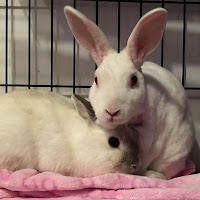 Penny & Ava
"OK, we can pick up the story when Mr. Toes and Abby are in the cupola; they finished watching the darkness and are getting ready to begin stargazing. Is everybunny with me?" commanded Pancake. "Suzy would be so proud of her!" I thought as I took a gulp of water and put on my headset. I saved my grog for later.
Pancake gave the count, "In five, ... four, ... " then switched to a silent count of three, two, one with her toes. We were back on track and rolling again. 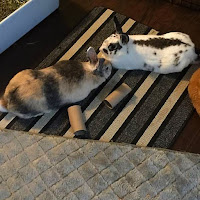 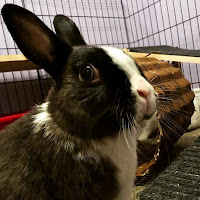 Mr. Toes
* * *
Abby turned upside down and held onto my foot. We were still Earth-gazing, watching the little cauliflowers of afternoon storm clouds turning yellow and then orange as we sped over them at about five miles a second. To be honest, this was enough for me. Doing anything else would be superficial. Experiments, mischief, anything and everything else other than stillness felt like a come-on. This, right here and right now, fed my soul. That's as necessary as having fresh hay and clean water. There's no point in feeding the gut if the soul starves.
I suspected the same might be true for the hoomins here. They might have different reasons for trying to make it here, but when it's all said and done, do they realize the most important thing that can happen is the impact on their souls?
Now, the world below was slowly getting swallowed by darkness. The black void over the ocean was getting punctured by occasional lightning strikes. The time had come for some proper stargazing.
Credits:
- Renee: taking care of critters, photography
- Mr. Bun, Ijon Thichy The Nth: story
- Mrs. Angie: editing

Hahahaa! Even the bunns employ one of my favorite writing devices: breaking the fifth wall! Such brilliant little creatures, ain't they? :)=
-Jen (Kohl's mom)