The Disapprovers - The Bun Stuff, Pt. 2

Last Week on the Disapprovers: Mr. Toes and Abby make last minute preparations for their big vacation adventure. Mr. Toes contemplates the arrival and progress made by the next generation of disapprovers.
We played by the rules all day, giving hoomins no reason for concern. I only tried to take a few more naps than normal, but that's all. We ate really well, and we made sure to stay hydrated. Izzy and Freddie monitored our destination for any unusual development and detected nothing. Izzy reported only the usual life science experiments going on; there was a video conference call with a group of elementary school kids. They were very curious about growing vegetables in such an unusual environment. Most importantly, there was the sense of everything proceeding routinely. 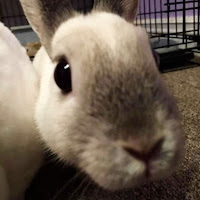 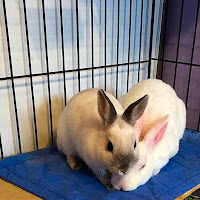 Penny & Ava
Sammy and Quinn, under the watchful eyes of Freddie, tested our suits, double checked all relevant destination parameters, plugged in the most current data points into the sim, and ran it one more time. Freddie tested and re-tested the voice communication equipment and the Morse code transmitter. All was set to go.
When the time came to suit up, I snuck a couple of cecotropes by hiding them under my right pawpit. I don't think anybunny noticed. Don't ask why. Freddie insisted we put on diapers. Yes, he did, and we did as he bid. 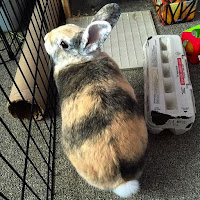 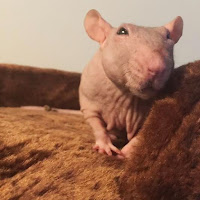 Freddie
Once we headed for the basement, Freddie and Bruno went with us to see us off. Everybunny else stayed in our improvised mission control. Everybun had something to monitor. For the most part, it would involve monitoring silence. It seems silly, but it is harder to do than it sounds. That's why they doubled up. It wouldn't be so bad if we picked a busy time of the day for our trip. Hoomins would be talking a lot, especially if they spotted us. But, we picked the least busy part of the day—or night, to be exact. Thus, listening to nothing is a high art.
We did a voice and Morse check one more time right before we crawled into the pot belly stove. Abby carried our goodwill present velcroed to her suit. We hugged Bruno and Freddie. He seemed very nervous and fidgety, almost restless. I thought it was very unusual for him, but then again, ours was a very rare "vacation." 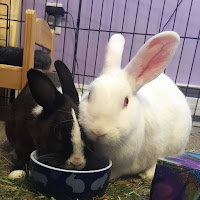 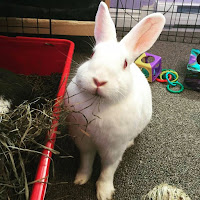 Abby
Pancake and Molly acted as "flight directors" and both went full "Kranz" for the occasion, sporting very dapper vests. Pancake wore a very clean-cut white vest and Molly had an ornate deep red and gold one. Pancake wanted to get a crew cut, but that would be hard to conceal from, or explain to, our hoomins. Bruno prepared a couple of catnip stogies for our return. I think they took it all very seriously.
Once Singularia picked the latest set of coordinates data for the remote port, we tested it in preview mode. Everything looked clear. We asked for the port, and I could feel my heart rate spiking. I relaxed and wiggled all my toes, trying to stretch them.
When the port was ready, we moved toward the exit and slowly stuck our noses out and listened for any signs of hoomin activity. We picked up no signs of hoomins piddling about. It's a good thing we were still, at least partially, in the port. We backed into the port, then moved forward with enough energy to float out of it. 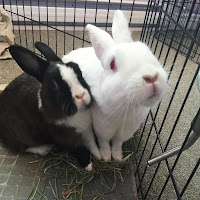 Mr. Toes & Abby
We were on orbit, at the International Space Station, roughly 260 miles above our home. As I floated out, turning slowly, the place smelled like I remembered it from the preview and it sounded the same too. The station hummed and grunted a little bit. I was crossing the main module, heading for its side. Out of the corner of my eye, I saw Abby, turning head over hocks, with a huge grin on her face.
I could feel my head getting a little stuffy, fluids slowly flowing into it. As I approached the side of the module, I extended my paw and cushioned my contact with it, trying to slowly dissipate my energy through muscle tension. I didn't want to bounce too hard. It almost worked. When I saw that I would bounce anyway, I grabbed a cable of some sort. I hoped it wasn't important. The great and awful thing about being so tiny on orbit is that it takes so little energy and muscle to move about. It takes very little to stop or to get going.
Abby landed right on me, grabbing me by the shoulder. We stayed there for a minute, listening. We couldn't hear the hoomins moving or shuffling. In the station, you can't feel the vibrations of the floor when they stomp. They can't stomp; there's no floor. 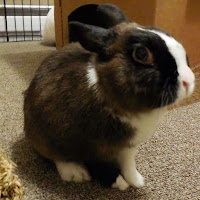 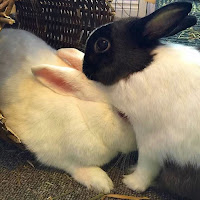 Abby & Mr. Toes
"Shall we?" I asked. Abby pushed away gently, imperceptibly, and gave her air bottle a little squeeze. She floated along the length of the module. I followed. We wanted to get close to some windows, and we knew just the place: the cupola! The only trouble was, there could be an insomniac hoomin night-owl taking up the place. We decided to sneak along the wall until we could peer into the cupola. We glided quietly, almost touching the surface of the wall. Abby stopped before the entrance. I slowed down and worked my way along the edge of the junction where the cupola connected with the rest of the station. I peered inside. It was dark and empty. And, there were windows! Lots of windows! There were a few cameras velcroed to the structure. I saw Abby's ears rising up from behind the edge. As I pushed off, I kept my eye on Abby and looked for a place to "glue" myself to. I closed my paw on one of the straps tying down a camera. I felt Abby's paw grabbing my foot and then pulling herself up, paw over paw, up the length of my torso, until we were nose to nose.
We became transfixed very quickly. We pressed our noses to the cold, thick window pane and looked toward home, slowly moving underneath us. It was still daylight over the Atlantic Ocean, but we could see the sunset was near over the western coast of Africa. We said nothing. I realized I had a death grip on the camera strap, trying to sue it for stability. My paw ached. I relaxed it and felt the relief of tension flowing through me. What was I really trying to hold onto? I couldn't hold onto anything, not really, not here. There was no need for that. It was our home below that did all the holding onto us.
Credits:
- Renee: taking care of critters, photography
- Mr. Bun, Ijon Thichy The Nth: story
- Mrs. Angie: editing

BUNNIES IN SPAAAAACE!!! :)=
Hmm...wonder what gift would bunnies give to hoomin astronauts?
Did anyone else have Peter Schilling suddenly play in their heads when the bunns were looking out of the windows?
"4,3,2,1 Earth below us
drifting, falling
floating, weightless
calling, calling hooooome..." https://www.youtube.com/watch?v=Jt-R5hj_lWM
-Jen (Kohl's mom)