The Disapprovers - The Bun Stuff, Pt. 5

Last Week on the Disapprovers: Abby and Mr. Toes enjoy stargazing in the cupola. After a long while proceed to deploy their gesture of good will right under the noses of the hoomin crewmember of the station.
Abby's eyes got big, and she put her paw over her mouf. In the next split second, I realized it was not a foot hugger that had jumped me, nor was it a hoomin. Freddie! Freddie had snuck up on me and grabbed my foot. I was certain that my heart had exceeded its design limitations, and this was an interesting way of testing it to failure. I couldn't look at Freddie for a long while. I had to get my nerves under control. I was afraid that my furious gaze might burn a hole in his forehead, and then all of us would have a really bad day. 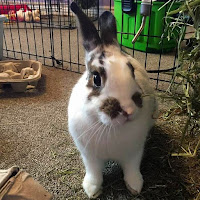 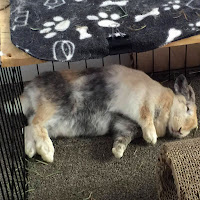 Pancake
When all my gauges started getting back in the green, I lifted my foot with Freddie still hanging onto it and patted him on the back. "It's good to see you, Freddie. What brings you up there at this hour?" He was still grinning. "You know, Major, I never tested that sandwich; don't you think that's wrong? Shouldn't I set things right? Last chance, you know." Freddie kept on grinning. "NO!" I said sternly. "The offering of a sandwich and a half-eaten sandwich are two different things!" Freddie wasn't even looking at me anymore. His eyes were fixed on the sandwich that was ever so slightly turning and twisting on its tether right in front of us. Freddie's eyes started to bug out, and the beads of saliva forming around his mouth were growing by the second. Then, it was my turn to hold onto him. That's when I noticed how proper his outfit was. I got peeved again when I realized that he had a little jetpack! A whole, tiny rig with small thrusters was on his back. He was holding a small controller in his left paw like the genius he was!
I had to break away from my admiration of Freddie's ingenuity when he fired the thrusters and tried to move toward the sandwich. Abby got a hold of him and blasted from her air bottle. I did the same, and we both managed to overcome Freddie's valiant reach for the smelly treasure. We were floating toward a couple of laptops mounted on a wall. It looked to me like we might hit them, triggering only Zeus knew what alarm. Abby noticed this, too. She gave a nice, strong blast of air, changing our trajectory enough for us to land safely on a bunch of tools fixed to the wall. She grabbed something firmly, and we came to rest after flopping about on the wall, back and forth several times. 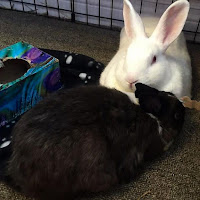 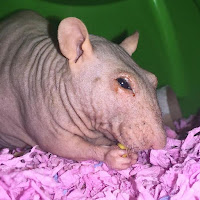 Freddie
Freddie seemed to have returned to his usual self, and I had the sense he wouldn't try anything heroic anymore, so I let go of his suit. I asked him, again, how come he was here, and he told us that the rest of the crew had talked him into coming up. Sammy and Quinn were testing a new composite for their 3D printer, and they had just got done making these nozzles for his tiny jetpack. Freddie was grumbling, complaining about everything, whining about how it really should be him on this "flight." They spoke to Molly about him, and she decided that we would all be better off if Freddie stopped being so cranky, got "pranky," and got on his way. He already knew the coordinates for Singularia, so there wasn't anything preventing him from joining us.
Officially, though, he insisted that the trip was for the testing of the little jetpack, and since we were here, we could offer him assistance if something had gone wrong. And that's how our official flight plan flew out the porthole. No bun told us about the sudden change of plans, as no bun wanted to break the radio silence. No one thought this was worth mentioning. 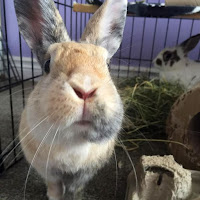 Pancake
I asked him about this reaction to the sandwich. He said he didn't know what had happened. We all agreed it was very strange because zero gravity supposedly deadens one's sense of taste and smell, but it had had the opposite effect on Freddie. To him, the smell became overwhelming, almost putting him a state of stupor.
After this little conversation, Freddie whispered, "At my age, one never knows if there ever will be another chance for an outing like this. I'm sorry, I should have asked to come along with you in the first place." Abby rubbed and scratched the top of his head, and I hugged him. After another minute of still silence, Freddie suggested that we plan on getting back soon. He was concerned that fatigue could affect our mission control crew. As the night wears on, we become more and more prone to making mistakes, missing subtle clues and things of that nature. 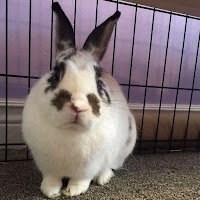 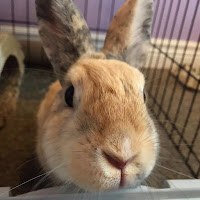 Pancake
I couldn't argue with that. "How about we have something to eat and one last stargaze before we leave?" I proposed. Freddie licked his lips. I took it as a "yes." Our options were to try to get past the sandwich again and go to the Columbus module at one end of the station or take our chances in the Zvezda module at the other end. I think that's where I saw a hoomin take a tray of growing veg the other day when we were visiting through Singularia, in preview mode. That route also went past the cupola and was closer to our port. Abby thought that was a great idea, and Freddie was just happy to hang out and follow us around. He enjoyed every moment of it, playing with his jetpack and frolicking around as we worked our way toward Zvezda. When we passed by the entrance to the cupola, I pointed to it, and his mouf opened up with a grin and exhilaration. We would come back to it.
Zvezda looked a little different from the rest of the station, but not much. It had a lot of dual language labels, and everything was marked in English and Russian. There was a big tray mounted to the wall on a metal arm, and it had a lot of veg growing on it. Mounted above the tray was a massive rack of growing lights. We put on our shades. I thought we packed them for nothing. Clipped to the tray was a small, hand-scribbled note that said "15:00 Z, Mrs. Jones' class." Abby grimaced and raised her paws in a gesture that said to me, "It's not our fault! What are we supposed to do?" I got the biggest lettuce-eating grin on my mouf. "I wonder how they'll explain this one to the kids?" We shook our head in unison, feeling sorry for the greens, and the kids, and we wondered if zero gravity does away with the sense of shame as well? 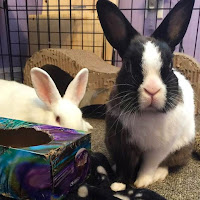 Mr. Toes
The colors from the growing lamp made it difficult to tell what we had in front of us, but I could make out some kind of lettuce, definitely basil, and mint. We dug in, taking care not to disturb the nom scene. Freddie did very well with the herbs; Abby and I gave the lettuce no chance. We smacked our lips with great satisfaction, and I could even smell some of the mint!
Of course, the veg only made us really hungry, so we pulled out some snacks and headed for the cupola. It was time to stir up Freddie's noggin.
Credits:
- Renee: taking care of critters, photography
- Mr. Bun, Ijon Thichy The Nth: story
- Mrs. Angie: editing

Hahahaa! Bunnies raiding the space garden; wonder what the astronauts will think! They better find that sandwich quick before Freddie has another snack attack!
Really sweet pics of everyone too :)=
-Jen (Kohl's mom)