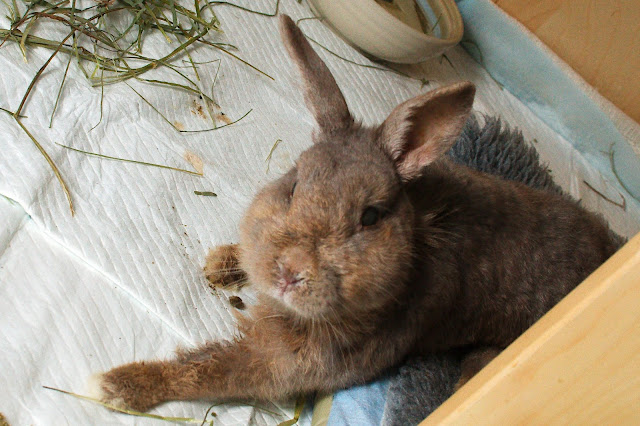 The good news is, all system are running OK. No sores, scabs or irritation to worry about. However, there's going to be a bum baf, sigh. And snorgles! I've been getting lots and lots of snorgles.

Hoomin says he has a question, though. The series 'The Disapprovers' is slowly winding down. "Slowly" is the key word here. He's on to putting together the last section. It will be two, maybe four episodes long at the most.

Would you care for any more "bun fiction" on Saturdays? He's thinking about short-short stories, self-contained, about 800 to 2000 words long. The theme would be "X plus Bun", named after the old time radio sci-fi series "X Minus One".

It a tough question, because bun servants are a kind lot to begin with, so the honest, constructive critique might be difficult to extract. Keep in mind that this blog is for you to enjoy.

What an adorable picture of you Mr. Bun; good to hear all systems are go :)=
I agree that bun servants are a kind and gentle lot, but see, I've been hanging out with bunnies for a while, so I have no problem being direct and honest :D So, for what it's worth, my two cents: YES! :) My husband and I look forward to the Saturday adventures and bunny stories, so if you feel inspired to do so, please continue them! :)
-Jen&Henrik (Kohl's mom and dad)

All systems are a go then,yes keep up with the stories we like the new story theme,xx Rachel and Speedy

Yeah for Mr. Bun and all his systems! Please, keep the stories coming. Please, please, please! I refuse to make any allusion to what bun servants are or aren't, were or weren't. Except that at one point, they all gave a bunny a chance. However, after all the years of marching to The Tar Pits and all the disapproval, I think they can be counted on to speak their mind. Please, please, I need stories.

Oh, yes. Yes. Please, more stories. My buns (all nine of them) and I have been looking forward to the disapprovers every week and X plus Bun sounds like a good theme, indeed.

Enjoy everything you get there Mr. Bun!!! You look so cozy ...

I am not a huge fan of science fiction or fantasy stories, but do enjoy them and carry on as long as it does not get in the way of bunn duties ... we would not like you to suffer any more disapproval than already dished out.

Happy to read about all systems go, Mr Bun. As for story idea's, 3 words. Buns In Space :) Although the theme from " Mission Impossible" is running through my head rignt now. Change channels, " Green Acres" all good. Ken&Kaci

It is a lot of work to write the reports--I won't call them stories because I am sure they are true adventures. They could be made less time-consuming if you used more photos and just captioned them, rather like the "graphic novels" that young humans seem to like now. And some week maybe just photos of all the cast of characters with their bios, because I have trouble keeping them straight, except for Mr. Toes my old favorite.

Mr. Bun is looking so venerable these days. I have no buns but I have been lucky enough to have several cats live to be ancient and offer their wisdom to me. For a cat, ancient is late teens.

On rereading your post, I realized that you have decided to end The Disapprovers and go to discrete stories instead. Well, my idea still applies, I suppose--writers could use more photos and fewer words if they employed the graphic novel format. This would leave them time to perform bun chores!
Speaking of which, I hope you haven't fallen behind due to time spent writing the Saturday adventures.

I for one would like to see a photo of these nine buns and their calico friend!

Indeed, writing the stories happens only when all the other proper bun chores are attended to. We did start (not sure why the "we" here, by the way) the series over a year ago with captions of photos. Next thing I knew they were trying to break into the basement to tear up the floor. Then they made friends with ratties and started talking to the cat. I'm afraid trading words for pictures/illustrations would double the work load, so that's a concern. You are making a great point though. We'll have to have some flexibility. A complete story once a week sound rather daunting at this point.