Last Week on the Disapprovers: The crew mourns and copes with the loss of Zeus, one of the founding members of the Disapprovers.
I woke up early and was rearing to go. To my surprise, my head decided to cooperate, even after all of the excessive beveraging and carrotinizing the previous night. I was nervously chewing a hay twig, waiting for the hoomins to finish their routine, morning reenactment of the Les Busnserables and get out the door. I had a hard time keeping still. One of my personal mission rules is to stare down the hoomins with disapproval until I can't see the whites of their eyes before I move. 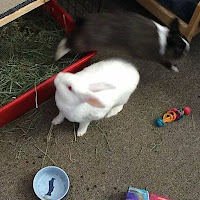 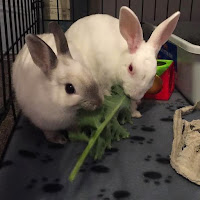 Penny & Ava
Once they were gone, I darted over to Abby, and we both went to see Freddie. We reviewed all of the requisite coordinates and data for our vacation's "dry run." Abby and I came up with the idea to create a memory burrow to make it easier to remember all of the details accurately and to have them easily accessible for Singularia. I know, hoomins would make a memory palace, but when you're a bunneh, a regal and down-to-earth creature, a good burrow will suffice; you don't need a palace to house your ego.
Right at the entrance to the burrow, I placed the necessary coordinates of our location; further down went the functions calculating the precise position of our vacation spot. Farther down yet, I set the probabilities of sudden fluctuations in the behavior of the earth's magnetic field.
When we prepared the calculations for this endeavor, we considered the possible effects of small clumps of various minerals striking our temporary home at high velocity. We concluded that the tiny ones would have a negligible effect, and we were not aware of any large ones destined to be anywhere near us. We agreed that if any such objects were to cross our path, we would abort the mission and try again later.
Afterward, we suited up, packed some snacks, water, a couple of bottles of compressed air and headed for the basement. Singularia tickled my lobes for a moment, trying to peruse my memory burrow. She was surprised when she put it all together and asked if we were sure about this. Then, I surprised myself. I have to admit that, for a moment, I second guessed myself. 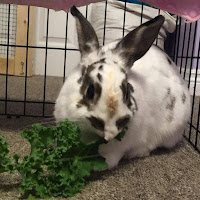 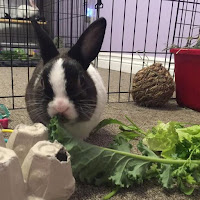 Mr. Toes
Yes, we were sure, and we were ready. Abby and I closed our eyes.
I saw Abby's feet, right in front of me. I was floating, suspended in mid-air, upside down relative to her and slowly turning to my left. We were in an empty storage compartment. In a few days, this spot would be filled with items arriving on a re-supply flight. That's why we were trying to get done with our simulations early. This compartment was the perfect spot for a remote port.
As I turned and faced the opening of the chamber again, my heart almost froze. I saw two hoomins in the primary structure, floating by. One was looking through a camera, pointing it at the other hoomin. That one was talking about something, promising to show everybun how going to the bathroom is done. She gesticulated a lot, and her hair was standing straight up as if she were electrified. They are a strange lot, those hoomins. My pulse started returning to normal. I was so glad to be going through this in preview mode.
I told Abby that I was going to try that air bottle. It was velcroed to the front of my vest. I pointed it as straight ahead as I could and pressed it tight against my chest. I hoped that when I released a burst of air, the line of thrust would go directly through my center of mass. If I didn't, I would go anywhere but where I wanted to go. I pressed the little trigger, and the bottle hissed as it gave up some air under high pressure. I floated backward with a slight turning motion to my left. "Not bad for the first time!" I thought and adjusted which way the nozzle of the bottle pointed and gave it another squeeze. I moved much faster this time. I hit a wall behind me and bounced hard. I tried to turn around, puffing the bottle to the side, but instead went into a spin and kept tumbling. I was about to float out of our little hideout. 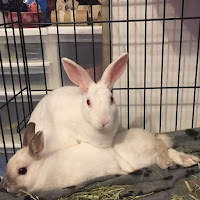 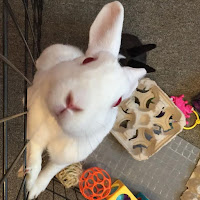 Abby & Mr. Toes
I looked for something I could grab. I felt Abby's paw snatch my foot and slow me down a little. We floated together again until we bounced into another wall. I reached out and clenched my paw on some colored cables fastened to the middle of the wall. Or was it a floor or maybe a ceiling? I couldn't tell. This "room," or module, had a square cross section and was rather long.
I always wondered what would it be like to play a "fly on a wall," and now I knew. I was a bun on a wall, and I loved it! I had to take a moment to come down and to let myself become rational again. Right below me, a hoomin was floating by with a big tray of something that looked like lettuce and flowers. Lettuce and flowers, here? I watched her and made a mental note where she disappeared with the tray. Abby and I looked at each other and grinned. We would visit here again, properly and in person. We stayed in that spot for a while, watching the hoomins, listening to the noise this strange home made almost continuously. The simulation was so real; I felt my head getting a bit puffy from the increased flow of fluids to my head. We sounded nasal as well. I was pretty sure I would be sore the next day from all my bouncing off the walls. 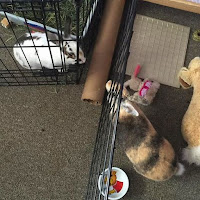 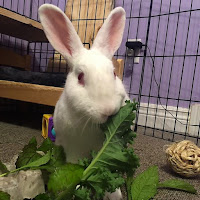 Penny
Next, we decided to try crawling along the walls of this much bigger compartment. I found myself tempted to go and explore the place instead of working on our plan. We were supposed to practice moving about to test the air bottles as a means of propulsion.
I looked at Abby with a grin and said: "We have to stop goofing off." She only gave me a frown as she floated by. She grabbed some handle and stopped, turning toward me. "We have to get our practice in," I said, trying hard to sound serious. I could barely keep myself from busting up with laughter. I couldn't keep a straight mouf. Neither could Abby. "At least we have to give it a try," some overly responsible part of me took over my mouf and tried to implore her and me. "Of course, Commander." Abby grinned as she turned herself around to face the wall and let out a tiny puff of air from her bottle. She went by me, very slowly, waving politely, like the proper queen that she is. I was impressed. She was in full control of her movements and trajectory. I tried to do the same and practiced until my air bottle was empty. 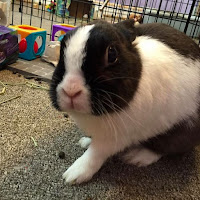 Mr. Toes
I was getting hungry. We worked our way back to the storage compartment, and only then did we open our eyes. This exercise was the most fun we had playing in Singularia. I reached into a pocket on my vest, pulled out a biscuit, and took a bite of it. To my surprise, I could eat here. I nommed and gazed at Abby's sparkling, glowing outline. I watched her take a gulp from her water bottle. As I began to relax, I started to feel how much this workout took out of me. I was ready to go home and couldn't wait to "sleep on it," after a lengthy and detailed debriefing of course, but you already knew that.
Credits:
- Renee: taking care of critters, photography
- Mr. Bun, Ijon Thichy The Nth: story
- Mrs. Angie: editing

So sorry for your loss of Zeus. The tiny household members have sadly short life spans, but at least you can give another a home then.