The Disapprovers - The Diversion

When Molly and Zeus were out, each kept as far away as they could from the other. Molly sat up and started cleaning her face and ears. Zeus ripped off his vest and searched for a snack. When he found it, he chomped it very quickly, then proceeded to drain an entire water canteen. He sat facing the wind and gazed at the eastern sky as it got lighter and lighter. The wind blew out the remnants of the fog and smashed the low hanging clouds, tearing at them and sweeping their cold fragments away.
"Any signs of the rover?" asked Zeus, still looking at the sky.
"Nothing yet, what happened there, Zeus?" asked Frankie.
"We'll debrief it later." said Zeus.
Abby went to Molly's side, sensing something bad had taken place. She didn't try to badger her with questions, but applied gentle nose nudgies. I took out a piece of dried carrot and thought "What the heck, they'll sing sooner or later. " The carrot was just right, chewy, firm and sweet. My teeth sliced it slowly and thinly, trying to make it last and I tried to savor every last bit of it. I was ready to head back in. The hoomins had to be on their way back home.
"The probe is in range! Get ready to retrieve it." announced Frankie from the control room.

Zeus
"Frankie, get the data stream as soon as you can, I need to change the power pack on it and we need to send it on toward the other end. I'm afraid that's where the action is." said Zeus.
"You're afraid?!? What's sort of assessment is that, Zeus?" interrogated Suzy.
"This thing is spiraling down at a steady, easy grade. No matter how interesting it's been so far, that makes it a lot more interesting. I'm afraid because I still have no basis for any reasonable explanation of this, commander." snapped Zeus and added "... please, get ready to help us get back in, commander.".
Zeus darted back into the tunnel, dragging a replacement power pack for the rover and a repeater. If the rover returned and tried to "call home", the repeater would amplify the signal and we would have a better chance of receiving all the transmissions back home. We hoped to get the data from the second "half" of the artery later that day. 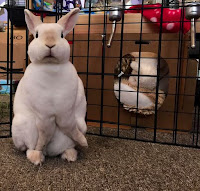 Suzy
"Frankie, did you get it all?" asked Zeus.
"Upload complete, replace the pack, Zeus." said Frankie.
He replaced the power pack on the rover and Frankie sent it on its way to explore. Zeus turned the repeater on and left it behind, next to the artery.
The wind was getting stronger and the skies to the north and west were taking on an ominus look. My bones ached with premonition of hail, freezing rain and lightning.
I looked at Bruno and said "Come on, help me get ready to plug the tunnel."
Right then Frankie yelled on the radio "Oh my! Bruno, diversion, now!" We froze and watched Bruno drop everything and turn toward the street. Without saying a word Bruno took off at a steady pace and disappeared into the shrubbery bordering the neighbor's yard. 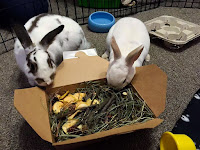 Molly & Suzy
"The hoomins, I ... I just picked up their signal and they're around the corner , I have no idea what happened. They'll be here in a couple of minutes."
"Hurry up everybunny!" said Suzy, trying to sound calm and unconcerned. 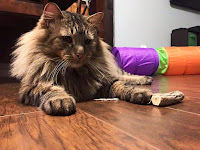 Bruno
Bruno darted through a couple of front yards and took up a position behind a trash bin by the curbside, between us and the returning hoomins.
We heard Bruno call, as calm as ever, "Ready for countdown."
"Stand by ..." said Frankie, almost nonchalantly, as if getting ready to read off the lotto numbers from last night.
Bruno could not see what was happening on the street and needed somebunny to give him a clue as to the speed and velocity of the hoomin's hybrid. The thing run silently at low speeds so he couldn't even judge its distance by the sound of the motor.
"... five, ... four, ... tree, ... two, ... one, go!" counted Frankie.
Bruno lept from behind the bin, right in front of the car and sailed through the air. He jumped close enough to the vehicle to make it look as if he were getting hit by it. Bounced off the hood, rolled his eyes and contorted his neck and torso, his tongue hanging out as far as it could. The two hoomins in the vehicle had their bodily fluids scared right out of them. Bruno twisted in the air, fell to the ground like a judo master and rolled a couple of time. He came to rest by the other side of the street, stretched out on his back, keeping one half closed eye on the hoomins. 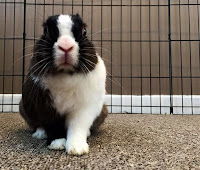 Mr. Toes
They stumbled out of the car, wobbled toward him and stared. Bruno made a faint sound. They picked him up, got back into the car, turned around and drove away.
"They turned away." announced Frankie.
Bruno, pretending to massage his head, tapped his little ear piece sending the "ok" signal to adventure control. He was most likely going to the vet for a checkup, xrays, the works. He felt banged up and sore all over, his right paw hurt a lot. He kept that to himself for now. If they really were heading to the vet, all would be well in the end.
We covered up the tunnel. All the rubbish we could find around got spread over the opening. Abby stepped back to keep an eye on how it looked compared to its surroundings. When it blended in seamlessly with the rest of the garden we turned for home. Abby took and carried all of Zeus' gear. He needed all the help he could get to keep up with us.
Credits:
- Renee: taking care of critters, photography
- Mr. Bun, Ijon Thichy The Nth: story
- Mrs. Angie: editing

They better have something special for Bruno - such a sacrifice. Might I suggest er, ah, Snickers? Kitty Snickers?